The upcoming “Engine” model of GameSynth will generate all kinds of vehicle engine sounds in real-time and with great accuracy, from formula ones to passenger cars, from super cars to heavy trucks and even motorbikes.

This new model is based on the amazing ESS (Engine Sound Simulator) developed by Sound Design Lab, a small company based in Shizuoka, Japan. We recently had the chance to talk to Osamu Maeda, its director. 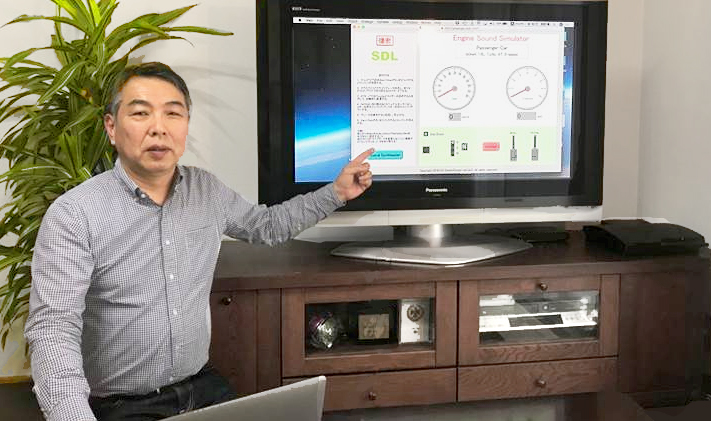 Hello Maeda-san, it is great to have you on the blog! Can you please you tell us a bit more about your professional background before starting SDL?

Hi Nicolas, thank you for inviting me on the Tsugi blog. I have worked at Yamaha Motors for 33 years in the research department. During that time, I have been studying the sounds of both bikes and cars engines. At the beginning, I was focusing my research on noise level reduction but then I studied the sound quality. Even if they have identical noise levels, two engine sounds may be perceived totally differently due to their sound qualities. I also studied sound design itself.

Examples of engine sounds generated in real-time by GameSynth using the ESS:

How did the idea of the ESS come to you and how did you develop it?

During our qualitative studies of the engine sounds, we asked subjects to listen to the sounds and to give us their impression. Of course, to do so we needed to provide the sounds of different engines with various specifications. So I thought about synthesizing them with a computer.
At first, we were only using a DTM (Desktop Music) environment driving sound generators via MIDI.
As you know, in such systems, a full continuous music track is produced by playing a succession of single samples for the various instruments such as piano and drums. However, we were not able to reproduce realistic engine sounds by using a similar method alone. So we combined it with other methods. In particular, we used the software Max to develop new synthesis methods.

What is the advantage of using the ESS compared to samples or other synthesis models?

Usually, games use looping samples to simulate engine sounds. We can make the analogy between the ESS and looping playback on one side, and CG (Computer Graphics) and live action in movies on the other side.
In recent years, CG has been used in movies, for example to replace live animals, partly because the animals will not move as the director would like, or are too dangerous to handle. However, if you use CG, you can safely make the exact the sequence you want and you can also edit it as you see fit in real time. Since the ESS sounds are entirely synthesized, it is similar to CG in that case (TN: you don’t need to access to all the car engines, or to drive them exactly as required by the game, it can be created in real-time.)
There are other engine sound synthesis methods which differ from the ESS but we believe that the ESS is more realistic, due to its closeness with the engine physics and how it can be applied to very different types of engines.

Speaking of which, how accurate is the ESS when modeling an engine, and how versatile is it?

Since the early ESS prototypes, the software was developed for engine sound research, so we pursued a very realistic sound from the start. The engine model of the ESS is a lot more elaborate and accurate than the ones usually found in current games, and it provides many parameters: the number of cylinders, the interval between the explosions in the engine, and much more.

It is my understanding that the ESS is also quite in demand these days in the automotive market.
Can you tell us a bit more about your work in that domain?

Currently the automobile industry is in a major transformative period. The number of Electric Vehicles (EV) but also Hybrid Electric Vehicles (HEV) and Fuel Cell Vehicles (FCV) is expected to increase considerably in the future.
However, electric cars have no engine sound. On one hand, electric cars are quiet which is good but a silent driving experience is less fun for the driver, which worries the manufacturers. As a solution to that problem, they are considering recreating engine sounds and playing them back from speakers inside the car. To do that, they need software such as the ESS, so SDL is providing this technology to the automobile industry.

To conclude, you are also an active member of the Smart Sound Design Society. What is its purpose and what is your involvement in it?

The Smart Sound Design Society is an organization aimed at spreading and developing sound design. As one of the directors of the association, I plan and hold seminars and workshops.

Well, that wraps it up! Thank you again for answering our questions, Maeda-san. Since Tsugi has obtained a worldwide exclusive license from SDL to bring the ESS technology to the game industry, GameSynth users will soon be able to experience the high-quality real-time generation of engine sounds in their games! If you are interested in trying the ESS in your project, don’t hesitate to contact us!