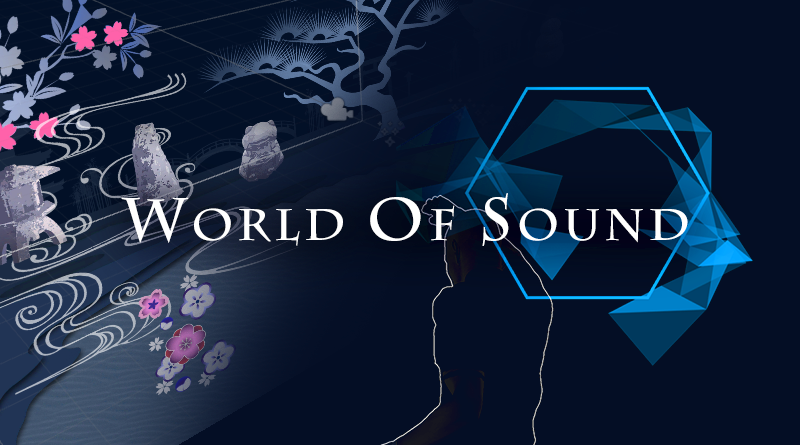 As part of the R&D services we provide, Tsugi was recently asked to develop a demo showcasing the various features of the CRIWARE plug-in for Unity, such as the interactive music and sound effects functions offered by ADX2 but also the video encoding and playback capabilities of Sofdec2: simultaneous movies, alpha-channel support, projection on surfaces, cue points etc.

We built the “World of Sound” demo, which contains a number of scenes in different locations and time periods, such as Kyoto in 1030 A.D. or Los Angeles in 2070 A.D., shown below, allowing us to demonstrate a large variety of features. 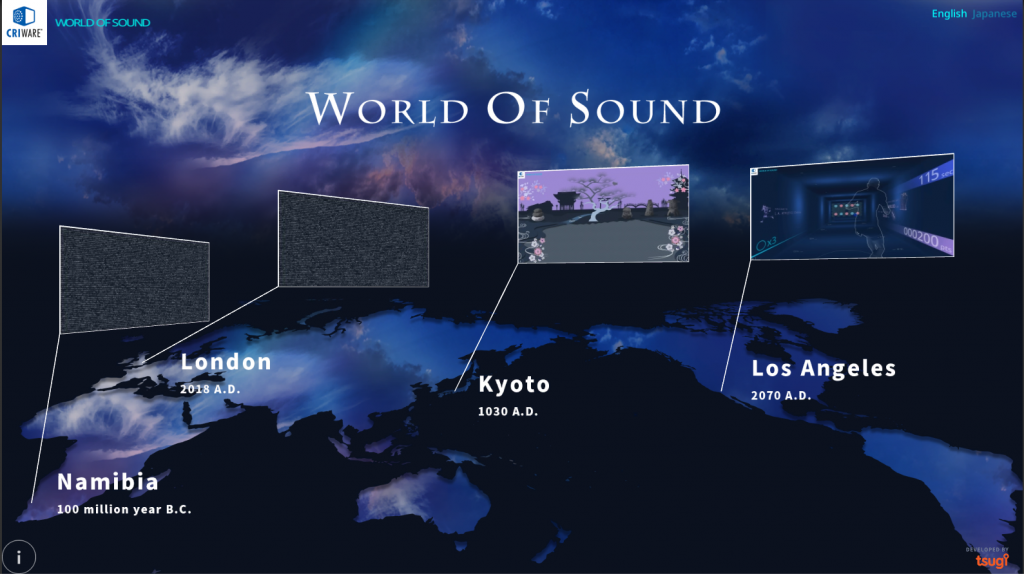 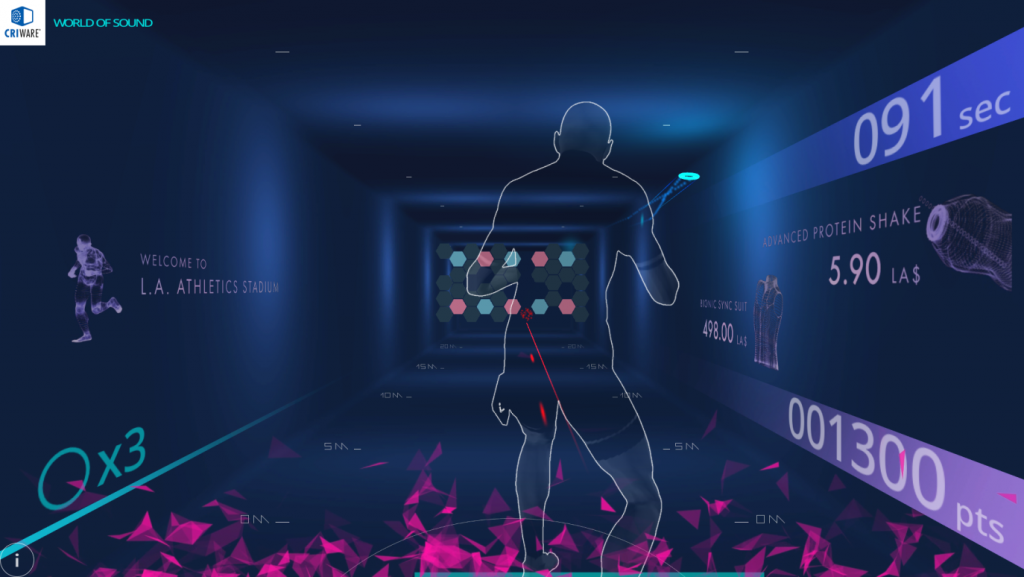 (Should you need help demonstrating your latest technology, develop an audio engine for your game, or a super-creative sound design tool; don’t hesitate to contact our talented R&D team!)

Of course the sound effects have all been generated by Tsugi’s sound design tools, starting with GameSynth! Since the “World of Sound” demo is so varied (from prehistoric beasts to electronic blips and peaceful ambiences), all GameSynth models were put to contribution: Modular, Whoosh, Retro etc. 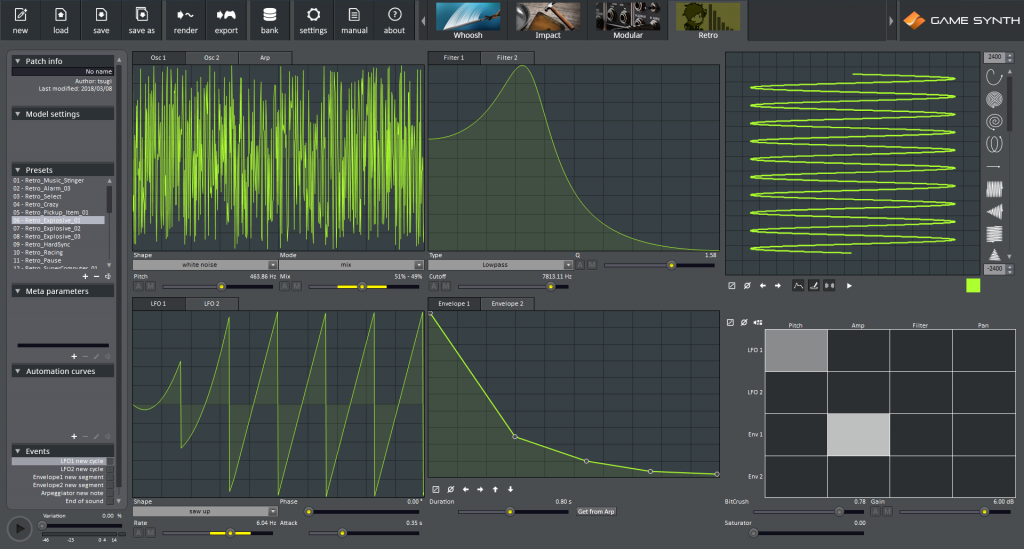 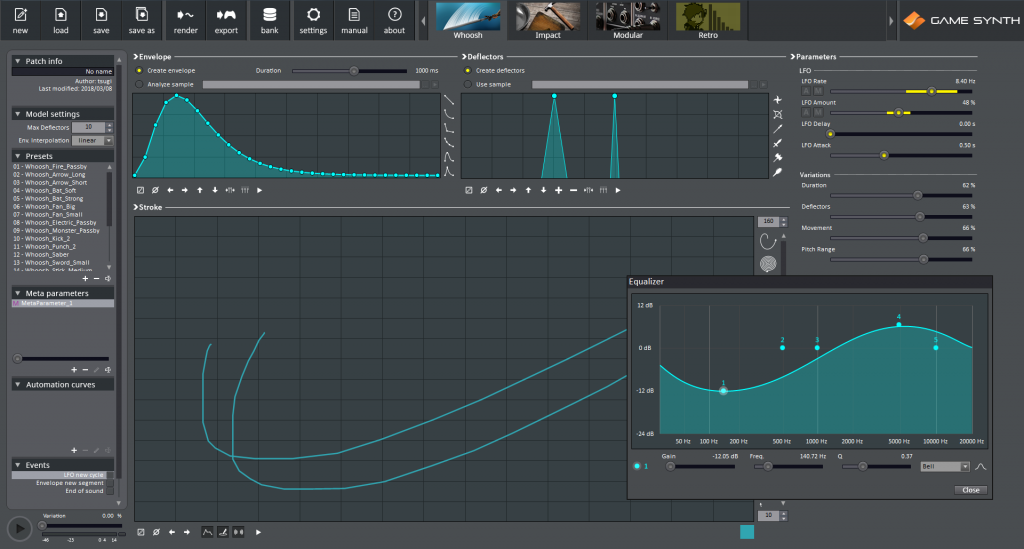 Because the goal was to demonstrate the ADX2 features, GameSynth was used as a sound design tool rather than a real-time game audio engine: the patches were rendered as wave files and automatically exported towards ADX2 (similar features exist in GameSynth for Wwise, FMOD Studio, Unity…). 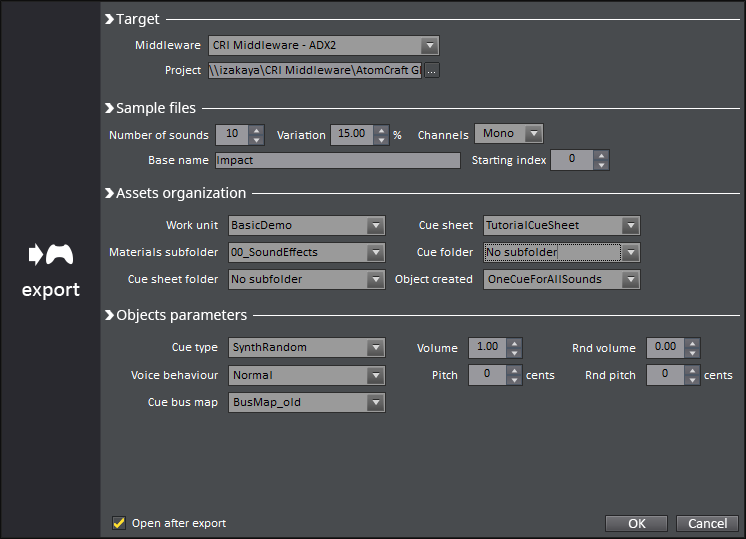 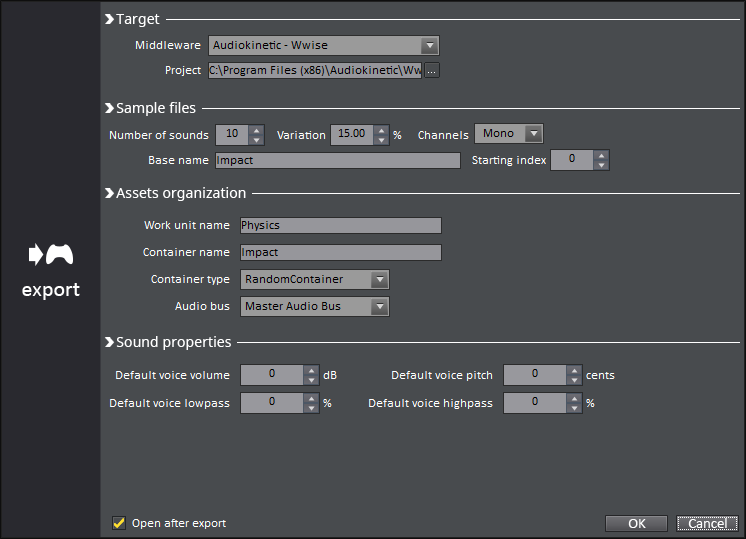 Further editing was then applied in AtomCraft itself (ADX2’s authoring tool), such as adjusting envelopes and filters, assigning random ranges to pitch and volume or setting 3D positioning parameters for example. To implement various sonic behaviors, all the different types of Cues from ADX2 were used: Polyphonic, Sequential, Random, Random No Repeat, Shuffle, Switch, and ComboSequential. Of course the demo also makes good use of other ADX2 features such as REACT for auto-ducking, AISAC for real-time parameter control, blocks for interactive music etc. 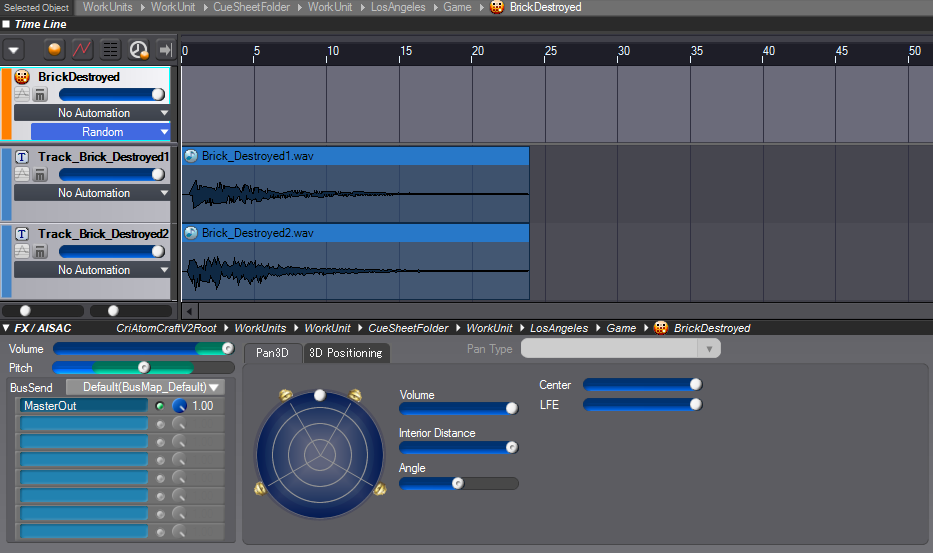 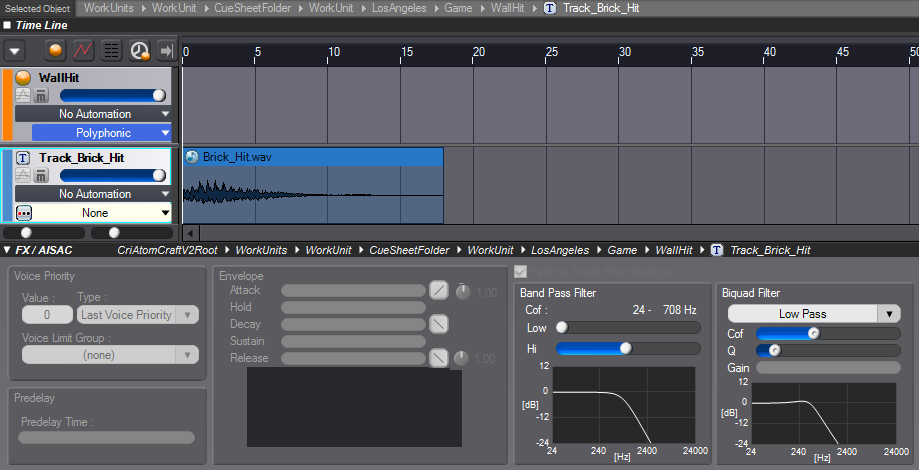 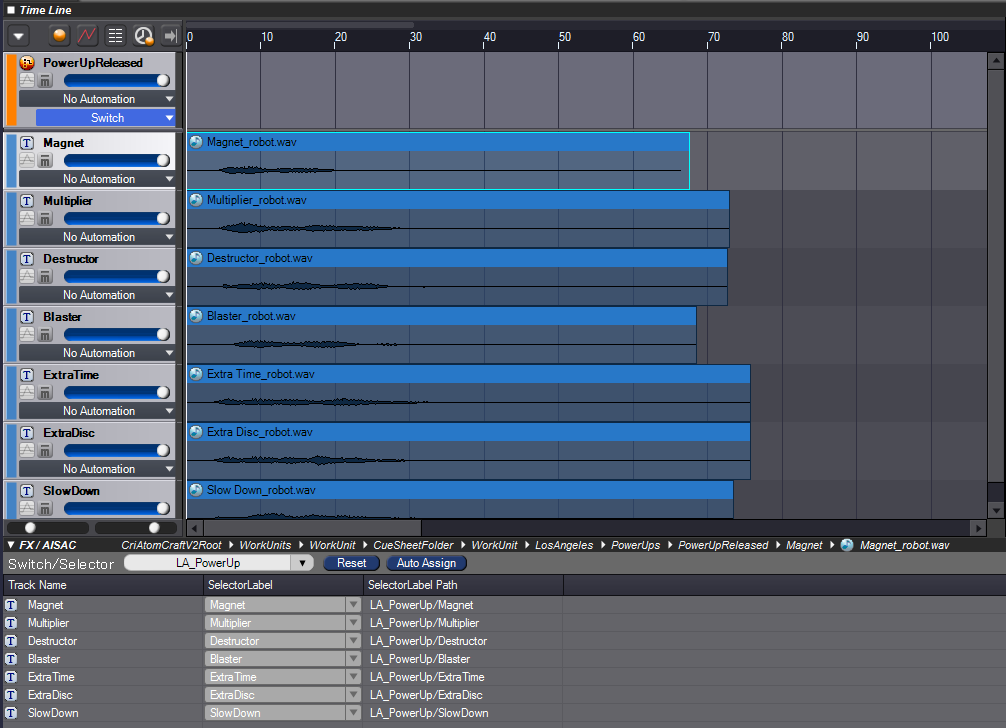 Some of the sound effects are robotic voices. They were entirely created in Tsugi’s Alto Studio. First, the text was typed in a .txt file. Then the Speech Synthesizer was used to generate the voices from that text. Finally, the resulting wave files were batch-processed in the included VoiceFX tool that allows the creation of robots, monsters, aliens, stadium announcements, radio transmissions and much more… 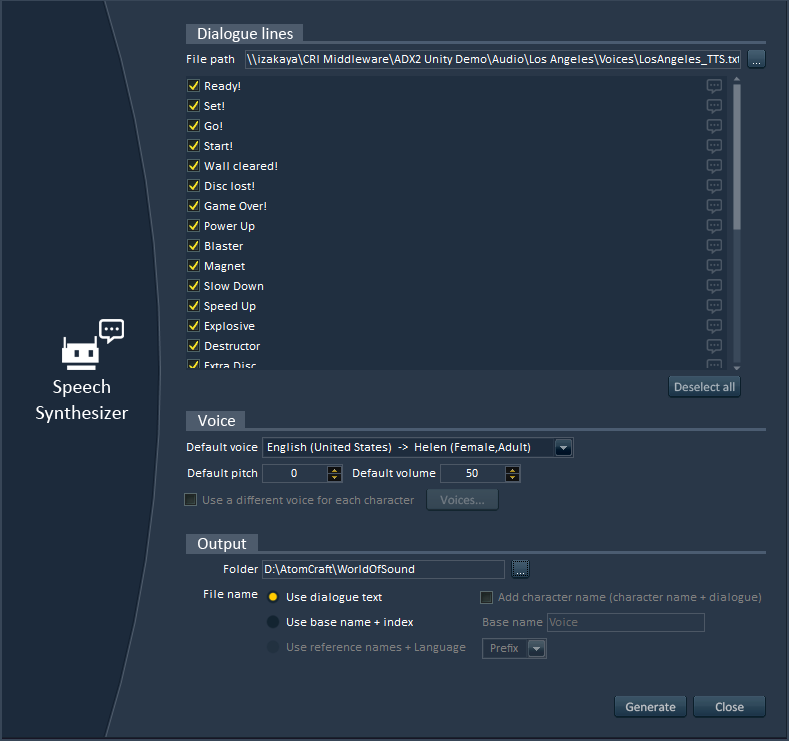 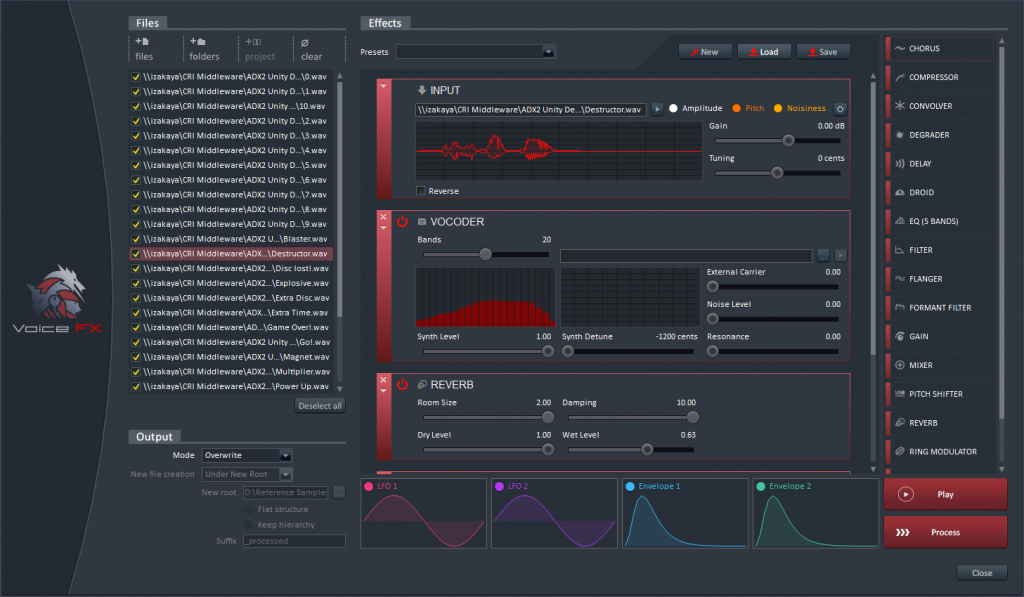 We even used DSP Anime for some rare sounds. For example, in the Kyoto scene, you draw shape in the sand of a Japanese garden to unlock new items and musical phrases. Each time a new garden object is unlocked, a magical sound is played, for which we simply used the Magic category of DSP Anime! 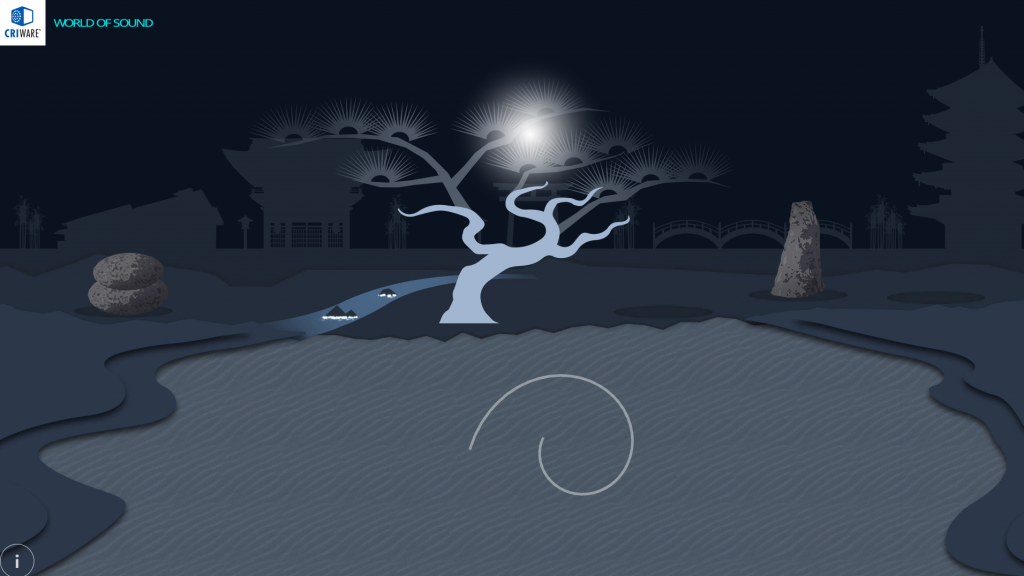 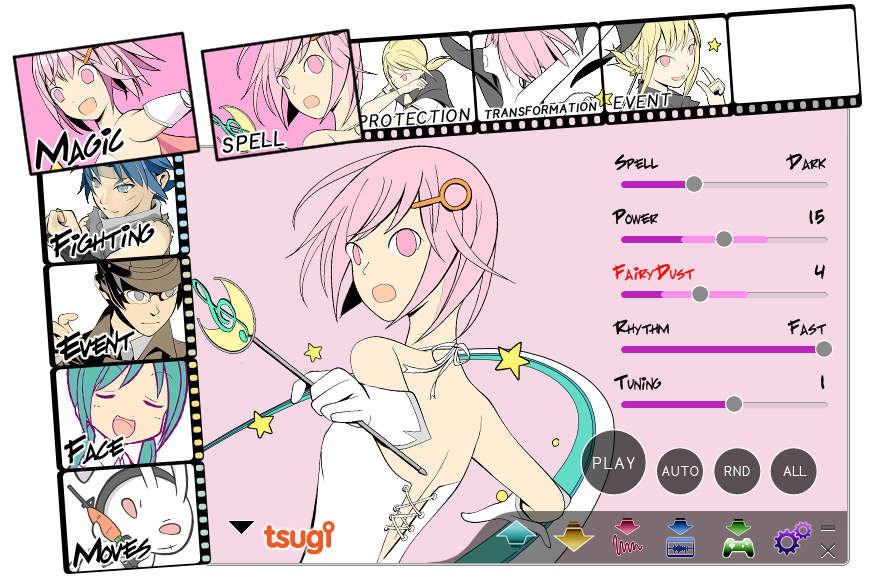 Here is a short video of the LosAngeles scene. Note that the music was composed separately in Ableton Live.


Below, you can download the wave files used as sound effects materials in AtomCraft. You can also check the procedural audio patches from which they were rendered. They will be added to the GameSynth online patches repository shortly.

Finally, you can also download the processing chain we used to make the robotic voices in Alto Studio, as well as the text file.

Where to see the full demo?

The “World of Sound” demo has been debuted at GTMF (Game Tools and Middleware Forum) in Japan and you will be able to catch it on the CRIWARE booth in other exhibitions later this year such as ChinaJoy, Cedec, Gamescom etc…

It was a pleasure to develop it thanks to the user-friendly tools and APIs of CRIWARE. Keep an eye on the CRIWARE blog for related tutorials in the future. The demo will also be part later of the CRIWARE for Unity SDK distribution, including all the code source and intermediary asset files.