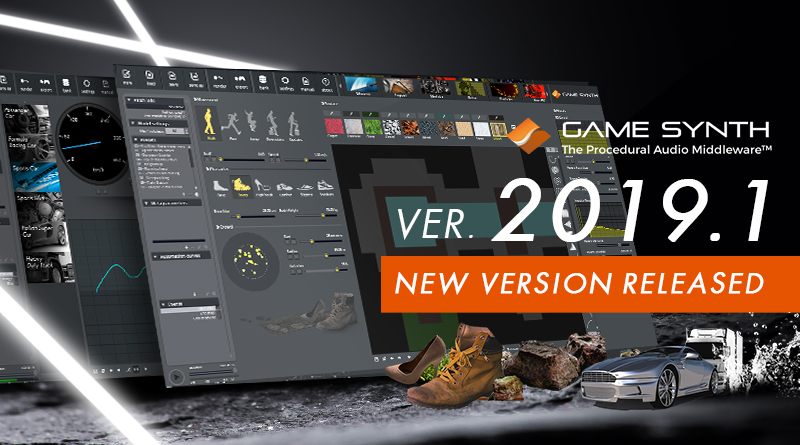 We are thrilled to announce the release of GameSynth 2019.1. This version is packed with new features and improvements that will make your work as a sound designer even more fun and productive!

The brand-new Footsteps model generates sound effects based on various movements (walk, run, jump, climbing stairs up and down), types of shoes (sneakers, high heels, boots etc.) and surfaces (concrete, wood, grass, mud etc.).  You can create a map on which to “walk” by drawing on the sketch pad, with the correct materials being selected based on the pixels colors. This map can even be exported to your game to trigger the right footsteps sound effects automatically across your level!

The Footsteps model is not limited to single footsteps either and can be used to generate the sounds of crowds walking, jumping etc. and even herds of animals roaming through the grass! All that with no sample at all!

We also released the Engines model, a physically-accurate and fully controllable vehicle engine simulation. Developed in collaboration with SDL, it is available as a separate plug-in. Check this blog post to learn more about it.

In version 2019.1, the Modular model welcomes a plethora of new modules. Among the new generators are Rocks, that can synthesize anything from debris to large moving stones and Goo, perfect for viscous sounds (e.g. slime, zombies and flesh wounds). The new processors include 1D and 3D waveguide modules (Tube and Cabinet), a Spectrum Splitter, a Threshold and an Envelope Follower. The Reverb module has also been improved. On the logic side, the Clock and Transitions modules are the most recent additions.

The Modular model now supports stereo patches and Stereo / Panner modules have been added as well. In total, there are now more than 60 different modules, all oriented towards game and movie sound design!

As a middleware not only fostering creativity but also aiming at improving productivity and workflow, GameSynth interfaces with many tools of the trade. In addition to the automatic export towards Wwise, FMOD Studio, ADX2 and Unity, GameSynth 2019.1 can now create tracks and add clips to your Reaper project or insert new nodes and audio source components into your Cocos2d scene.

Finally, we also added the possibility to import and export channel files (.chan and .clip) from Houdini as automation curves. This allows for the synchronization of the best procedural audio and graphics tools currently available!

There are many more improvements in version 2019.1. For example, the Particles model – a big favorite among GameSynth users – now offers new modulations types, as well as support for wave markers as particles starting points.


Until the end of March,
GameSynth is at US $290 (regular price US $390).
Don’t waste a minute!
Add the ultimate game sound design tool to your arsenal!