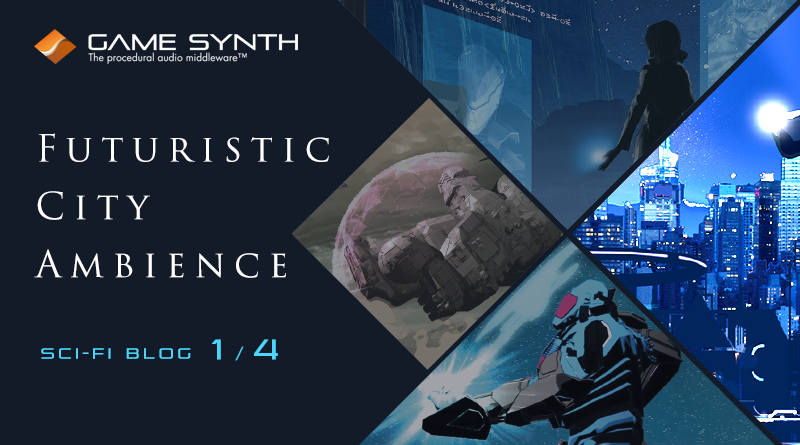 This is the first in a series of four posts that will look at the design of sound effects for sci-fi games and animated movies. From spaceship battles to alien encounters and cyber interfaces, we will show you how to generate every sound effect you need in a sci-fi project, thanks to the versatility of GameSynth.

For this first post, we created a futuristic city ambiance, not unlike the Los Angeles of Blade Runner, complete electric sounds, ship passbys and gloomy weather. With a surprisingly small number of patches, we were able to establish a convincing soundscape. Let’s check the result first!

A method to design futuristic vehicles

One of the main elements of this soundscape are the ships passing by. They all have been created using the same technique: first we generated a basic sound texture in the Modular model and then we re-injected it into the Whoosh model to create a dynamic passby.

This is a very effective method to design futuristic engine sounds. The Modular model, with its 60+ modules, lets you synthesize any sound you can imagine (although of course the Engines model is a very good candidate in this case too), and once in the Whoosh model, you can “perform” it as you want.

It is very intuitive to “draw” passbys in real-time and to create variations by adjusting the envelope and the LFO settings. The deflectors of the Whoosh model are also very handy to add a noisy layer that makes the result a bit grittier.

Moreover, with the pan modulation active on the X-axis of the SketchPad and a small pitch range assigned to the Y-axis, the Whoosh model offers a great way to simulate a Doppler-like effect simply by drawing! If you are using a graphic tablet you can even get one more level of expressivity through the pressure you apply with the pen. 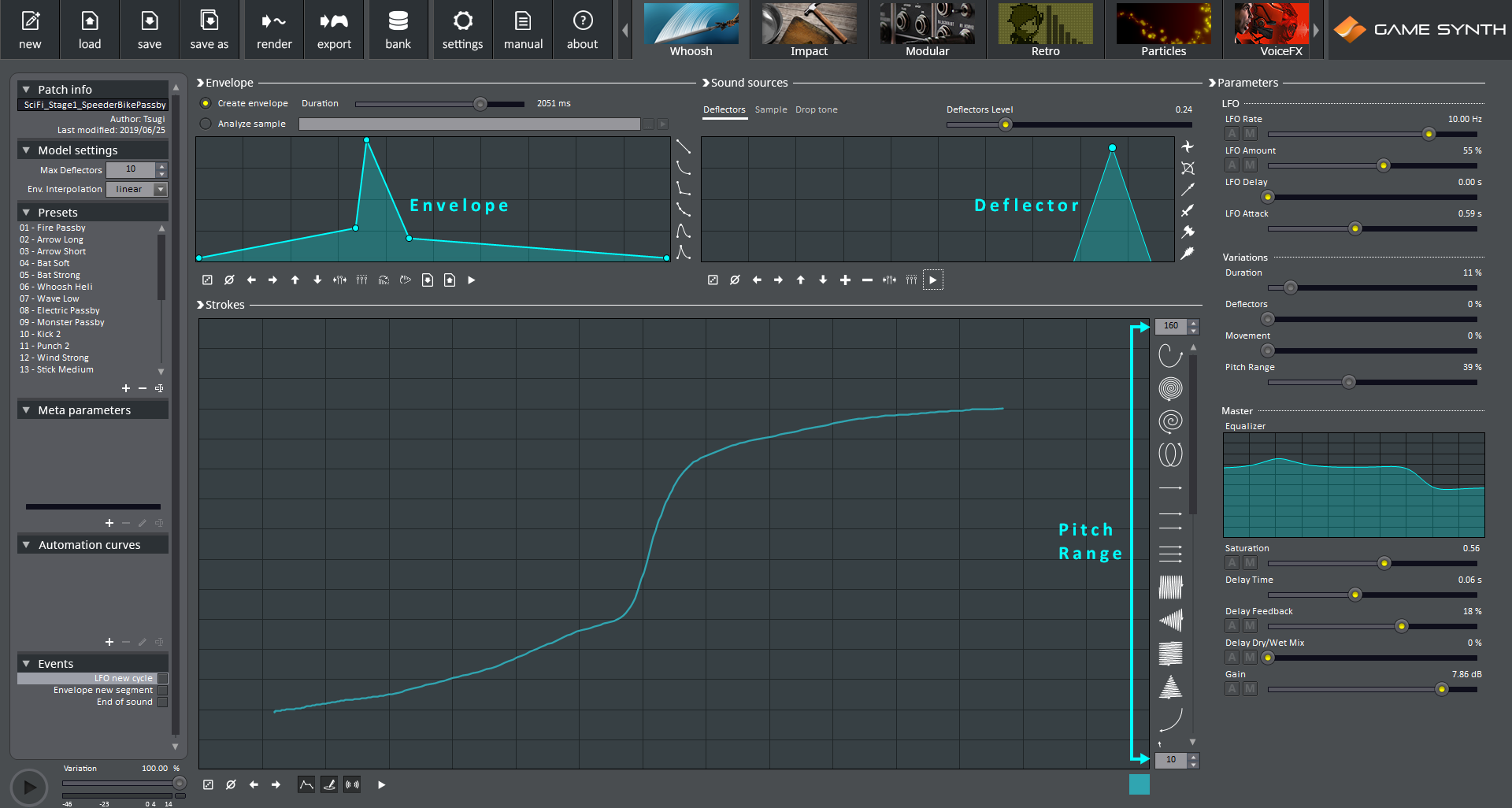 There are 3 types of vehicles in our scene: the speeder bikes, the slower transport ship and the police vehicle.

The engine sound of the transport ship is based on the Propeller Airplane preset of the Modular model, although with more oscillators and a lower pitch. Once imported in the Whoosh model, we can see that the amplitude envelope is higher in the middle of the sound – when the vehicle is in front of us – which reinforces the effect of the passby. The amount of LFO modulation is relatively low and the rate is only around 5 Hz as the vehicle is moving slowly. The pitch range is about 150 Hz so drawing lines on the Sketch Pad creates a nice Doppler effect. 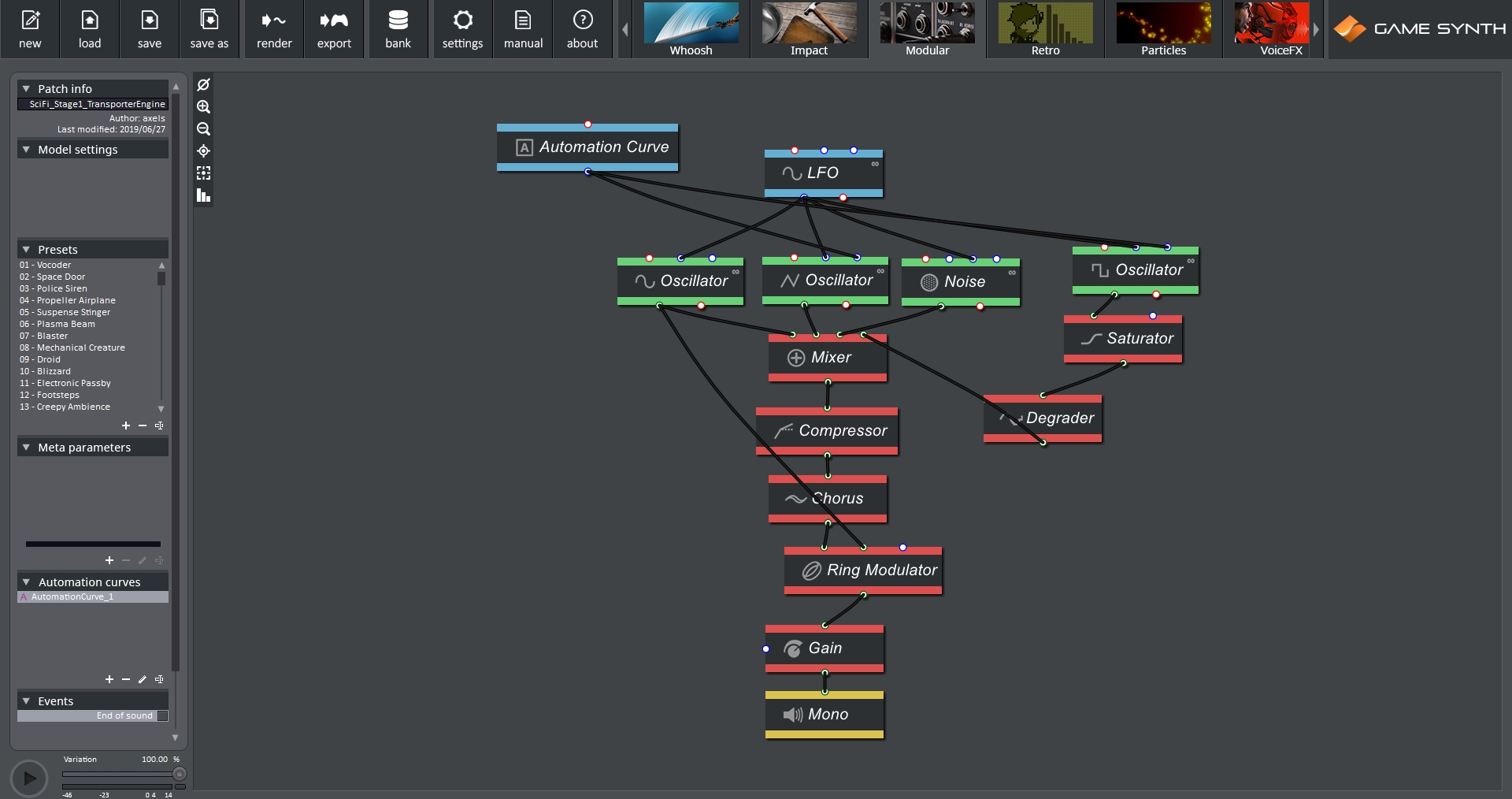 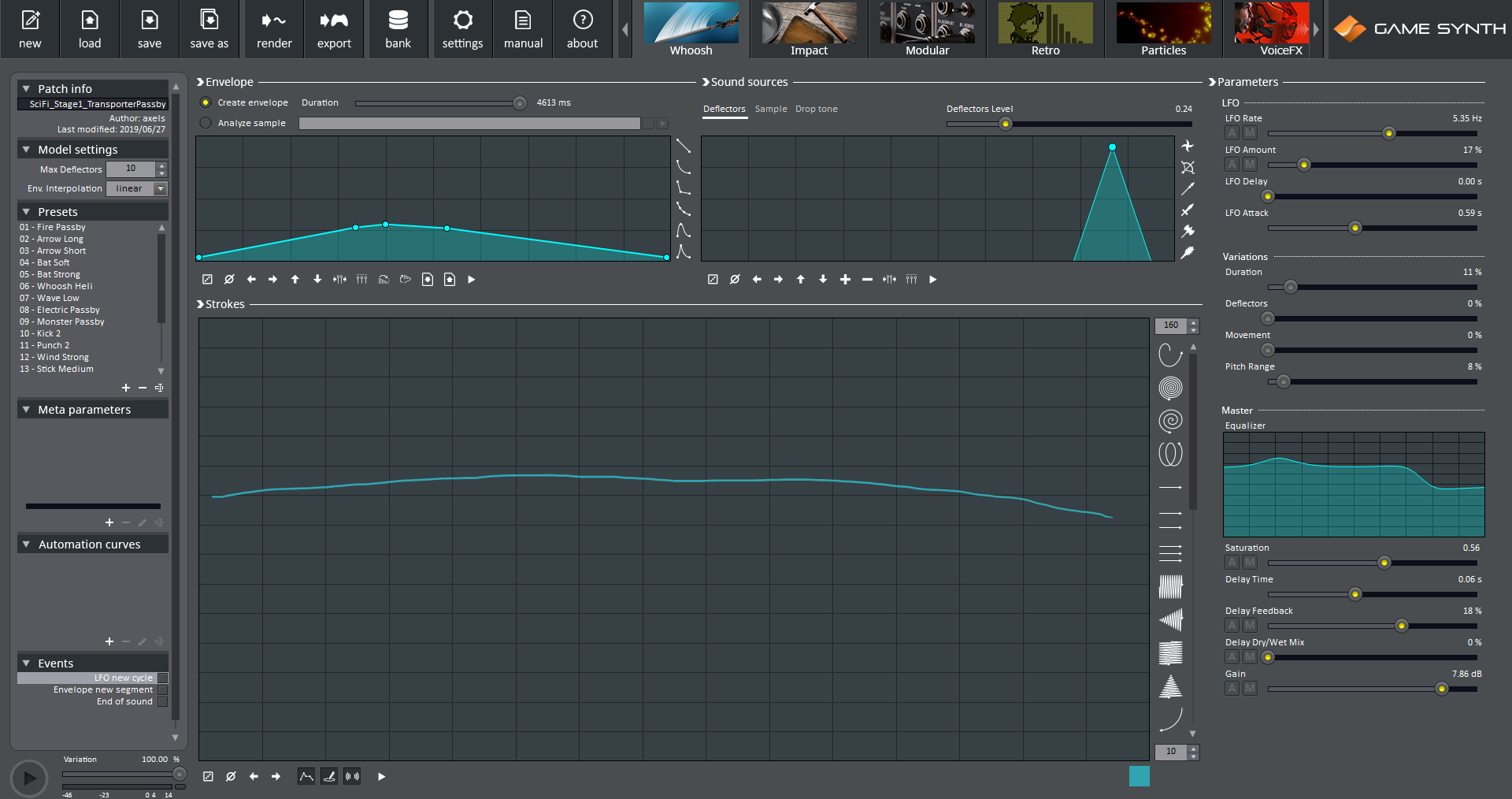 The speeder bikes are composed of two layers. The first one is also based on a slightly edited version of the Propeller Airplane preset as well and makes for the main part of the engine. It is then injected into the Whoosh Model. Once imported in the Whoosh model, the amplitude envelope is more accentuated, and the LFO modulation that we apply is faster and more pronounced. This leads to a faster and more aggressive passby than for the transport ship. 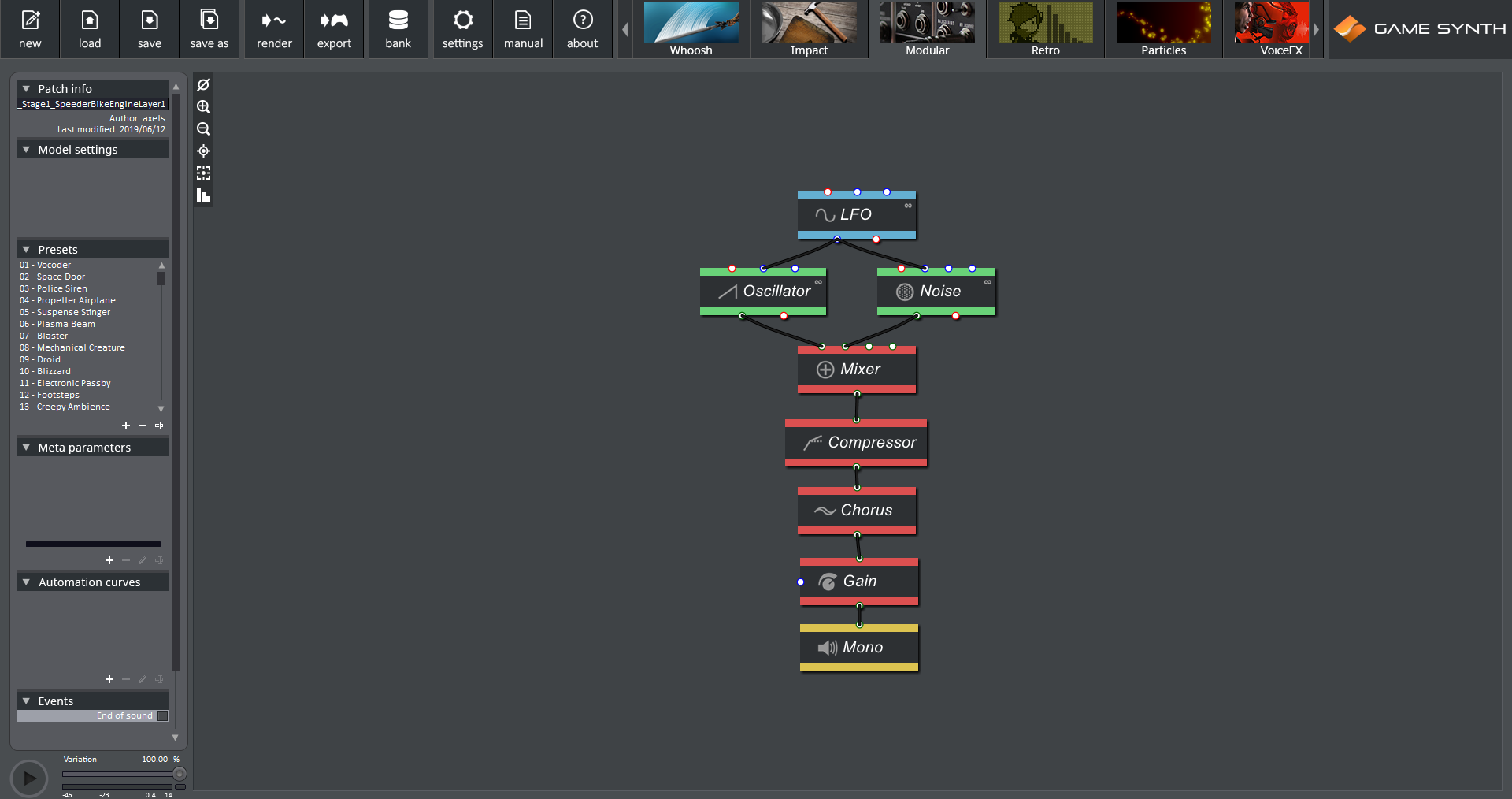 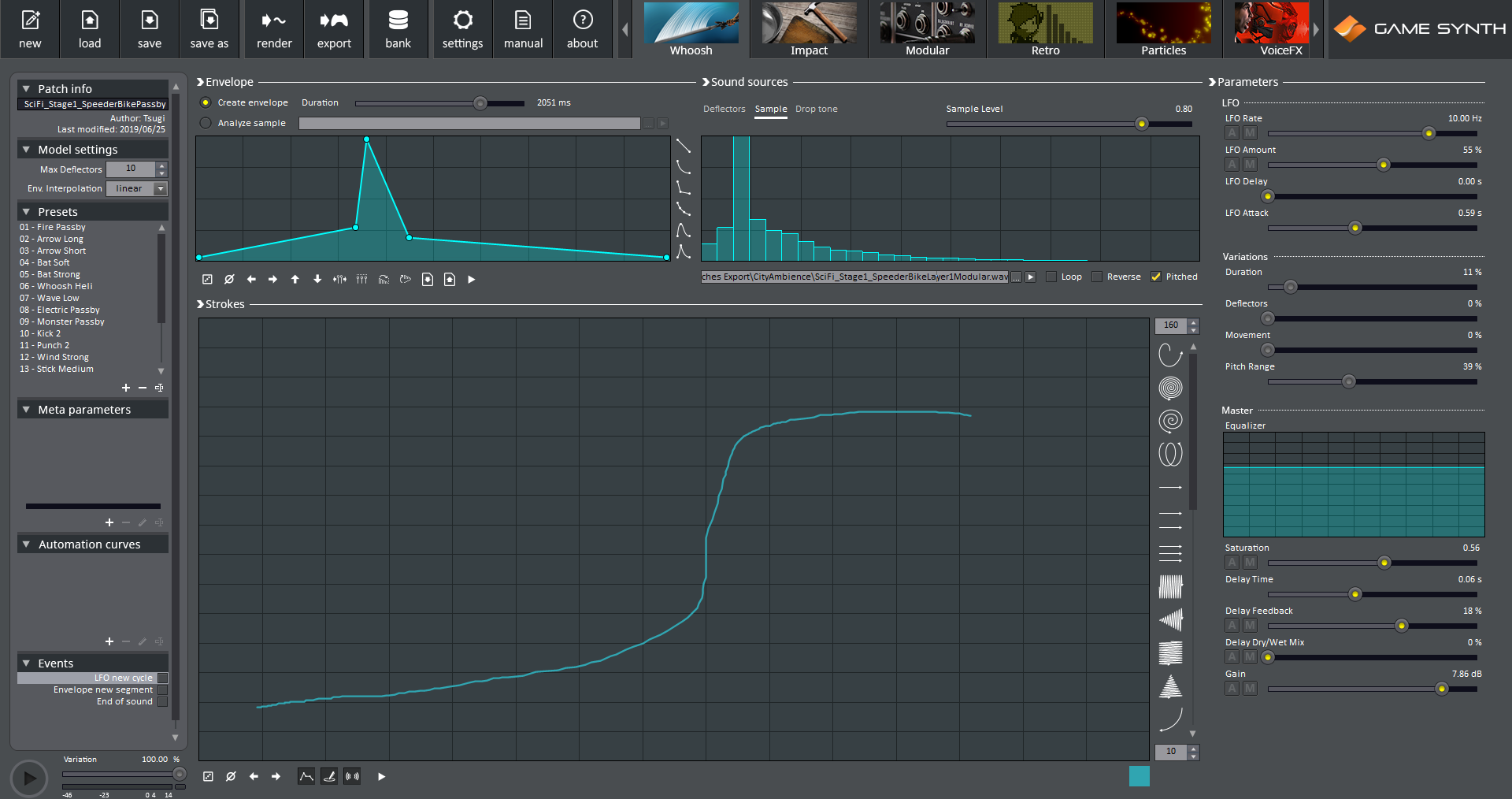 The second layer of the speeder bike engine is generated in the Impact model. We create a resonating material and create a contact with a smooth surface. The result is once again imported in the Whoosh model. 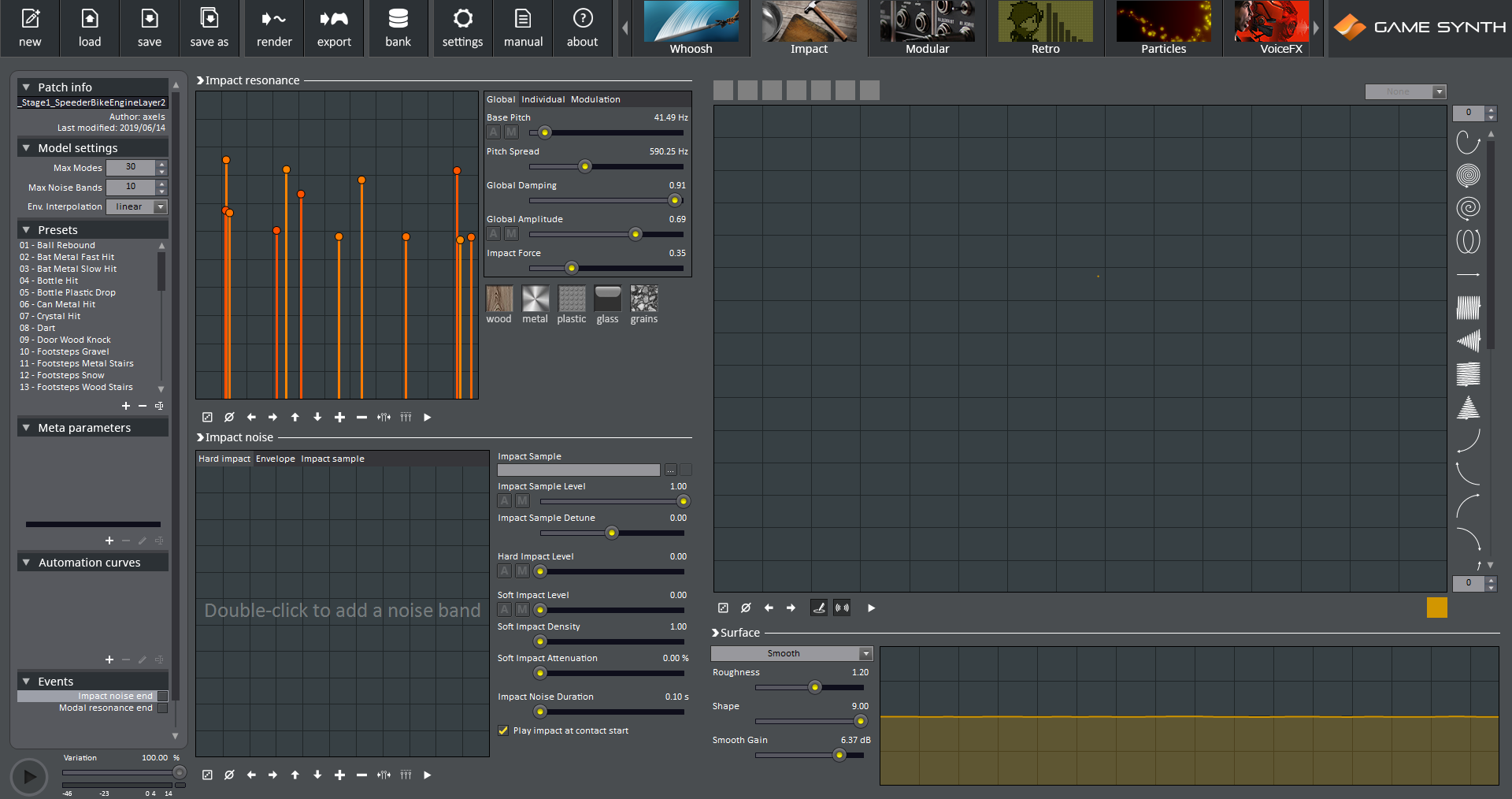 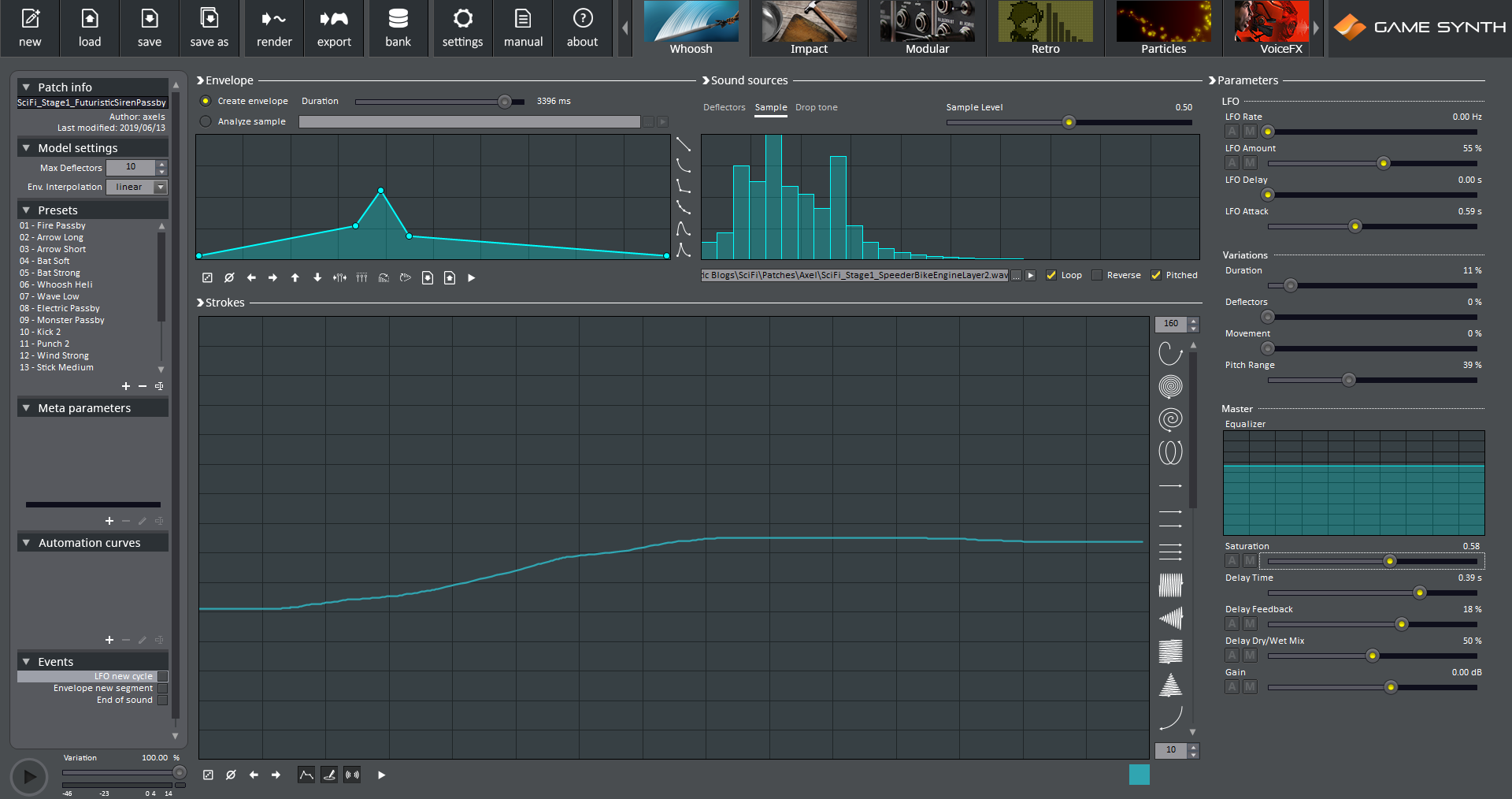 The police vehicle is flying lower and is not visible. We can mainly hear its siren. The siren patch consists of two detuned oscillators (pulse / sine) mixed together and sent through a formant filter and a couple of effect modules. A looping 2-step envelope modulate the pitch the oscillators to simulate the distinctive sound of a siren. 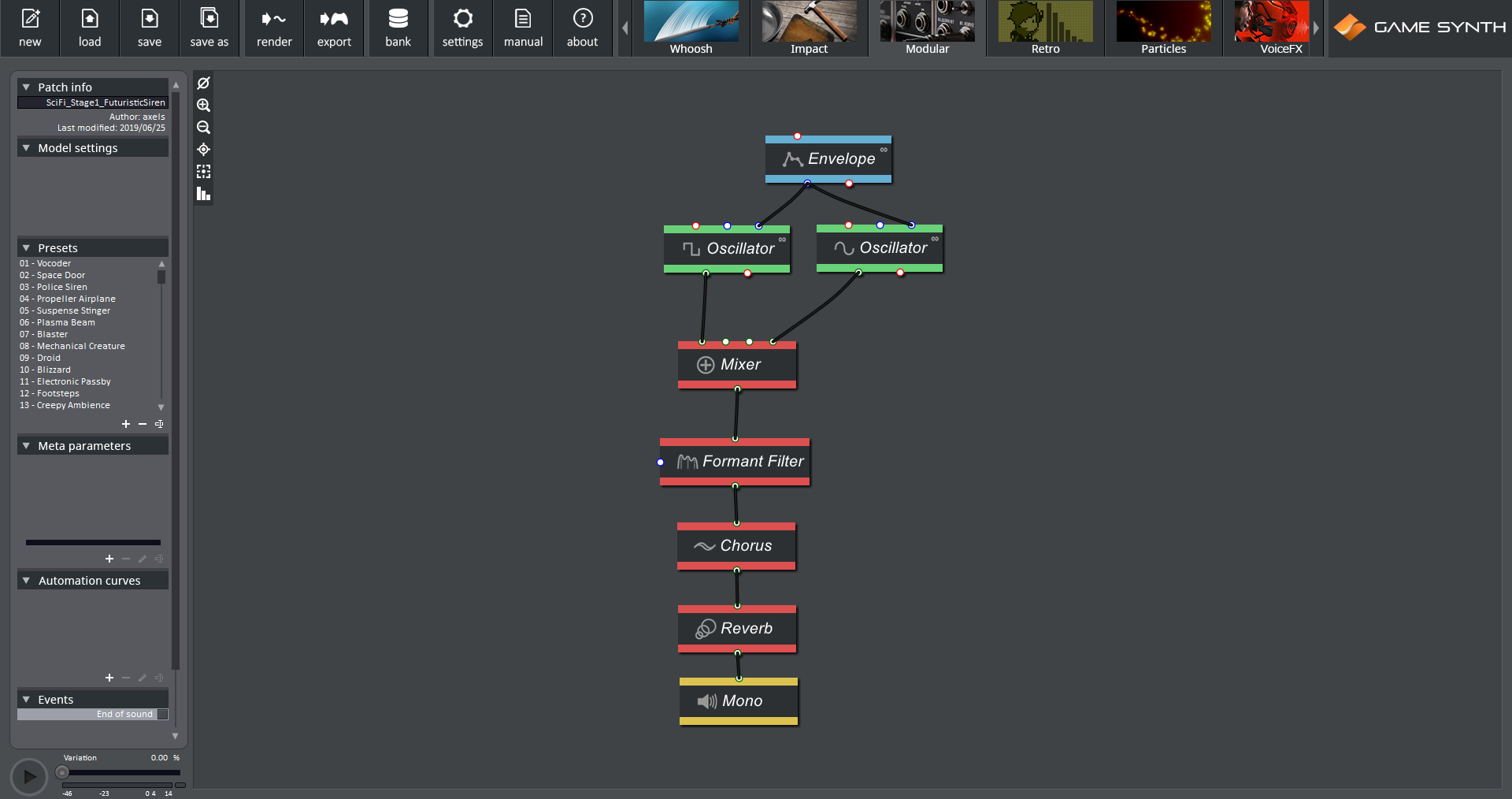 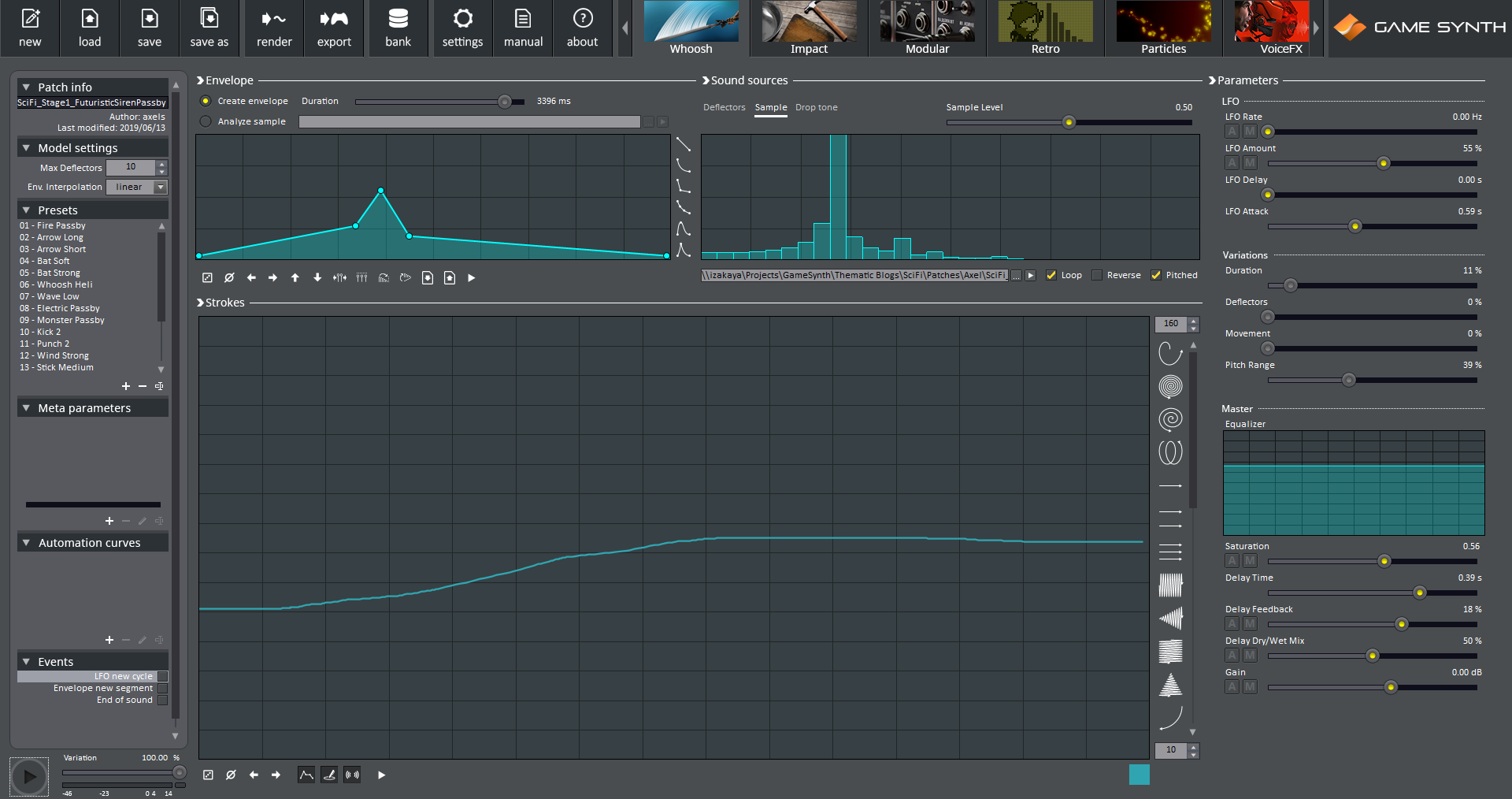 The sound of the air-conditioning unit in the foreground is a combination of filtered noise and output from the Motor module in the Modular model. To obtain exactly the sounds we were looking for, meta-parameters were connected to an LFO and an extra noise generator in order to adjust both the rotation speed and the power of the unit. 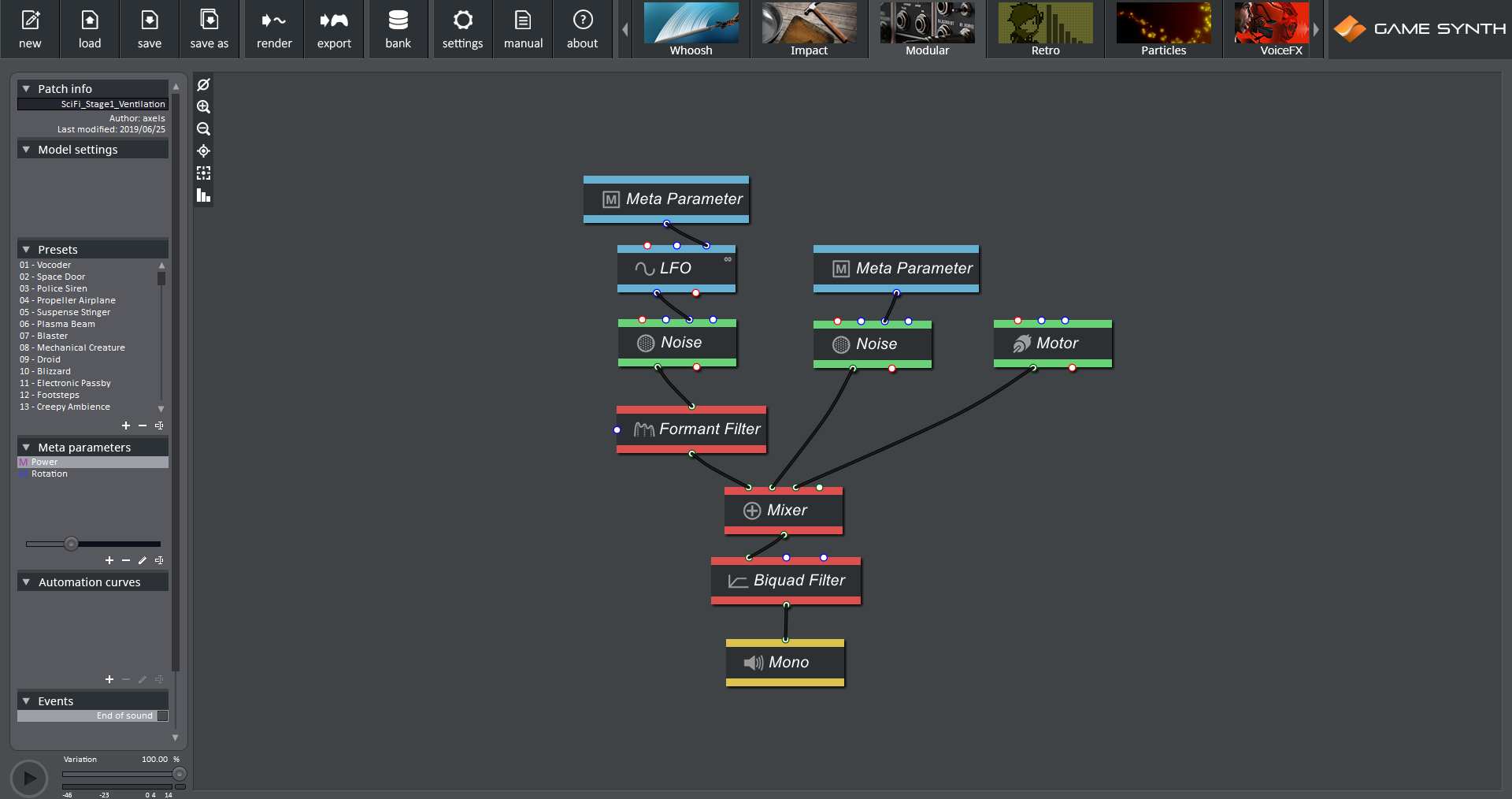 The Motor module can be the basis of many machinery-related sounds as it offers settings for starting, operating and stopping times, rotation speed, and rotor, brush and stator levels. There is also an Electricity module that can be very helpful as well in these types of scenes, although we didn’t use it this time.

In the middle of the animation, the rain starts to fall. The main sound is based on the “Rain” preset from the Modular model, slightly edited to make the rain a bit lighter. 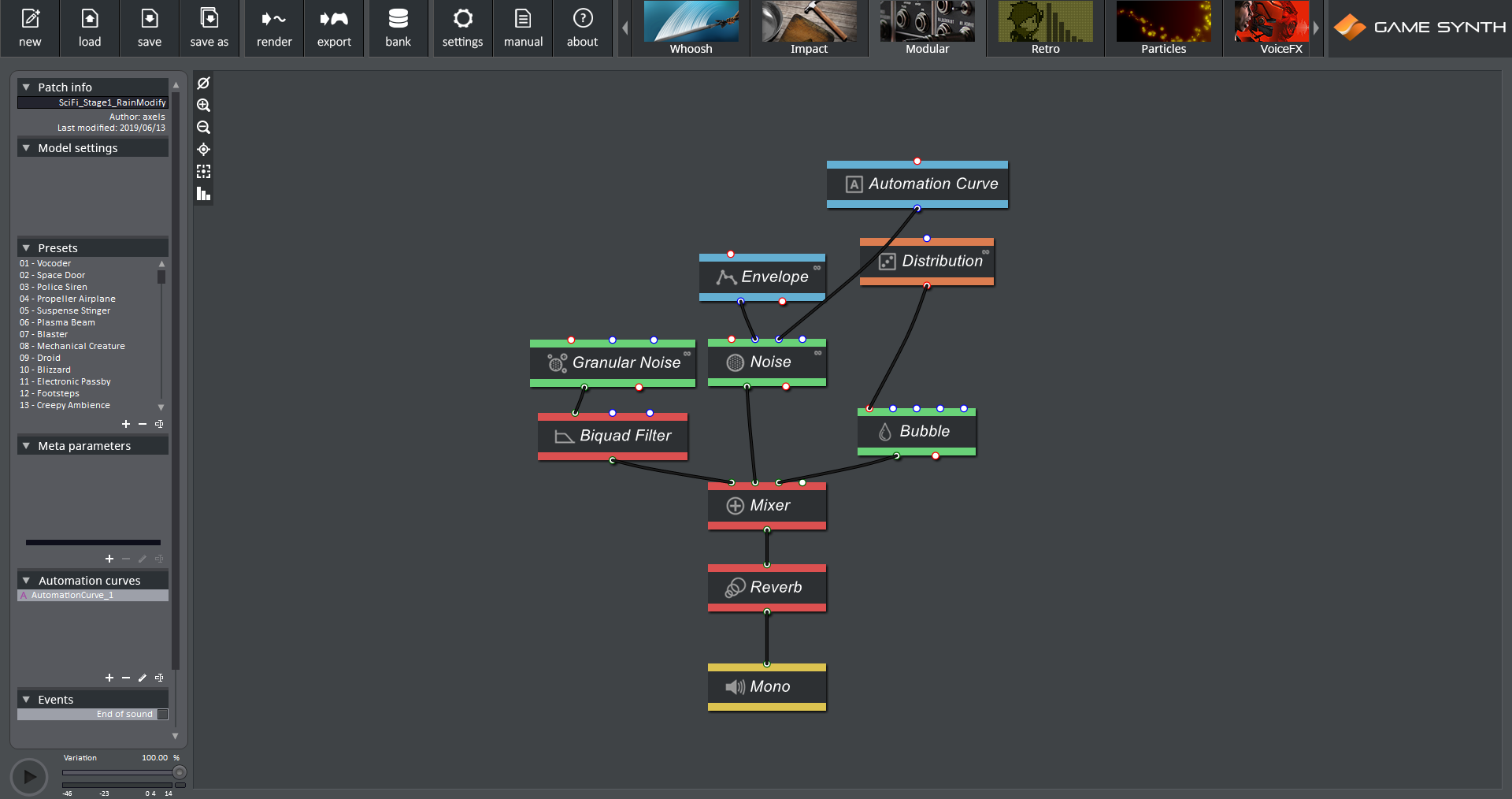 We simulate the different levels of detail of the rain with a noise generator (distant shower), a granular noise (close shower) and a bubble module (water drips) which allows us to keep the CPU cost relatively low. For more information about this technique, check our post on working with different LODs.

There are a couple more water drops in the foreground which are made with a second patch.

Their very wet and splashy character has been obtained by mixing the outputs of Goo and Bubbles modules and sending them through a Reverb module.

The clicking noise coming from the device held by the character is – a bit surprisingly – generated with the Impact model and is simply the result of mixing a couple of resonant nodes together.
We were initially planning on adding an announcement in the background, but this short soundscape is already packed so we will have to wait a bit more to see the VoiceFX model in action! 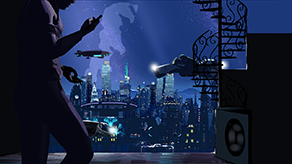 You can download all the patches we used in the animation below:
DOWNLOAD ALL PATCHES
These patches require GameSynth 2019.1 or higher.
In addition, they will all be added to the GameSynth  online patch repository.

This is only the beginning of our foray into sci-fi sound design. In the next post, we will describe how to design futuristic UI sounds and powerful mecha (i.e. giant robots) moves!