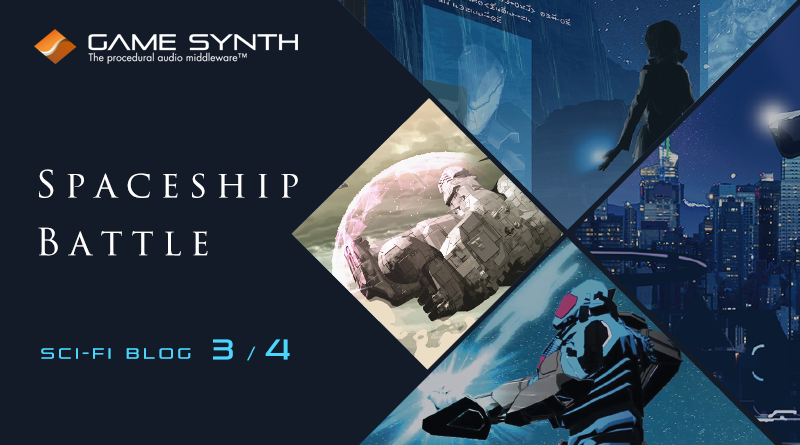 This is the third post in our series focusing on sound design for sci-fi games and animations with GameSynth. After creating the soundscape of a futuristic city and generating UI and mechanical sounds for a giant fighting robot, we will tackle another great sci-fi classic: the spaceship battle! So, get ready for some serious procedural action; we will see a lot of modular patching in this post with explosions, laser beams, shields and more! The scene depicts a battleship under heavy attack, which is slowly collapsing. Let’s check it!

Most of the weapons sound effects were designed in the Modular model. With it’s 60+ synthesis, processing and control modules, it can generate a vast palette of sounds, form ultra-realistic to very synthetic, which is exactly what we need here!

At the beginning of the scene, the quickfire coming from the small ships relies on a Clock module to periodically trigger 3 generators mixed together: the Chirp module creates the harsh noisy attack of the weapon, the Blip module generates the classic pitch-varying tone of the laser (using FM synthesis), while the sine Oscillator provides the low end of the sound.

The sound of the large laser beam that sweeps the screen is also achieved by mixing several sound generators.

A Chirp module is used again to create a powerful attack. The other generators are a saturated Noise module and two slightly detuned Oscillators. A short envelope controls the pitch of the oscillators and the frequency range of the noise during half a second, in order to create the activation sound of the laser.
The amplitude of the oscillators is also modulated by an LFO with a “Random” shape. This is a common trick to make them sound grittier and indeed that laser really cuts through the mix.

The sound of the two large laser beams being shot from the battleship is built around 3 Noise modules sent through highly resonant lowpass filters. Their cutoff frequency is modulated by an envelope. A saturator, inserted just before the output module, makes the sound more aggressive. A second layer, designed in the Retro model, was added for the sound to pack even more punch. It has two automation curves, controlling both the oscillator’s pitch and the LFO’s rate. 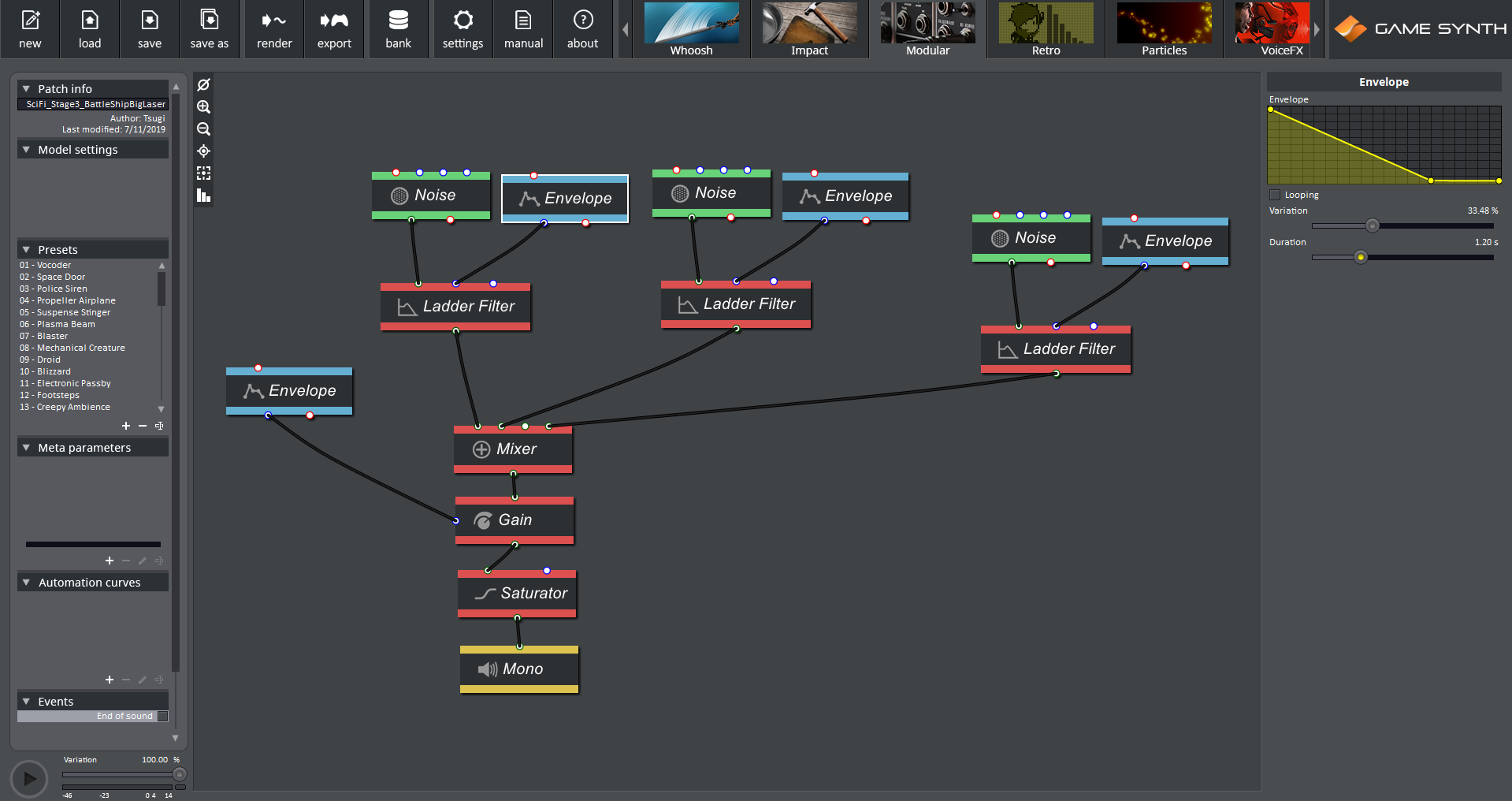 You can listen to the final laser sound here:

Space battles would be over far too quickly without shields! Popularized by Star Trek, shields sound effects usually have a predominant tonal element, which is why all the audio generators in the patch for the battleship’s shield are oscillators. There are two main branches in the patch. 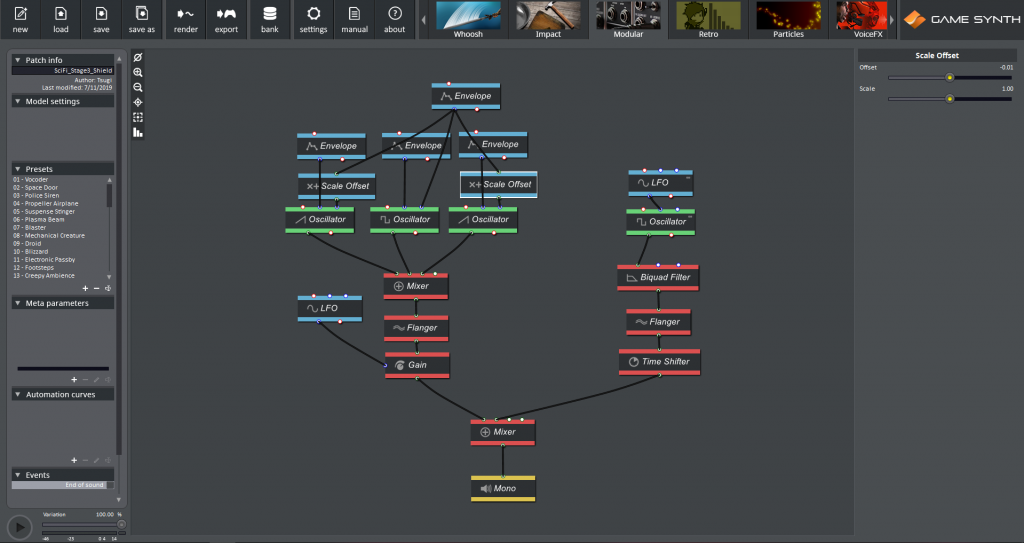 The first one, composed of 3 oscillators, creates the shield activation sound which slightly rises in pitch at the beginning. It is being amplitude-modulated by an LFO. The other branch of the patch consists of a slowly modulated pulse oscillator that plays during the whole time the shield is active. Notice the use of the Scale Offset modules in this patch. They provide a way to adjust the range of control signals very accurately.

There are many explosions happening in the scene, both in front of us and in the background. Therefore, we decided to create different patches, based on the level of detail (LOD) required. For more information about LODs in procedural audio design, please check this previous post, where we created a rain patch with both distant and close showers as well as individual water drops. In a game, working with different patches or sections of patch for each level of detail allows for the creation of dense soundscapes without using too many CPU cycles.

Let’s first check the explosions in the foreground. Because we can see and hear each of them distinctively, their sound design is a bit more detailed. 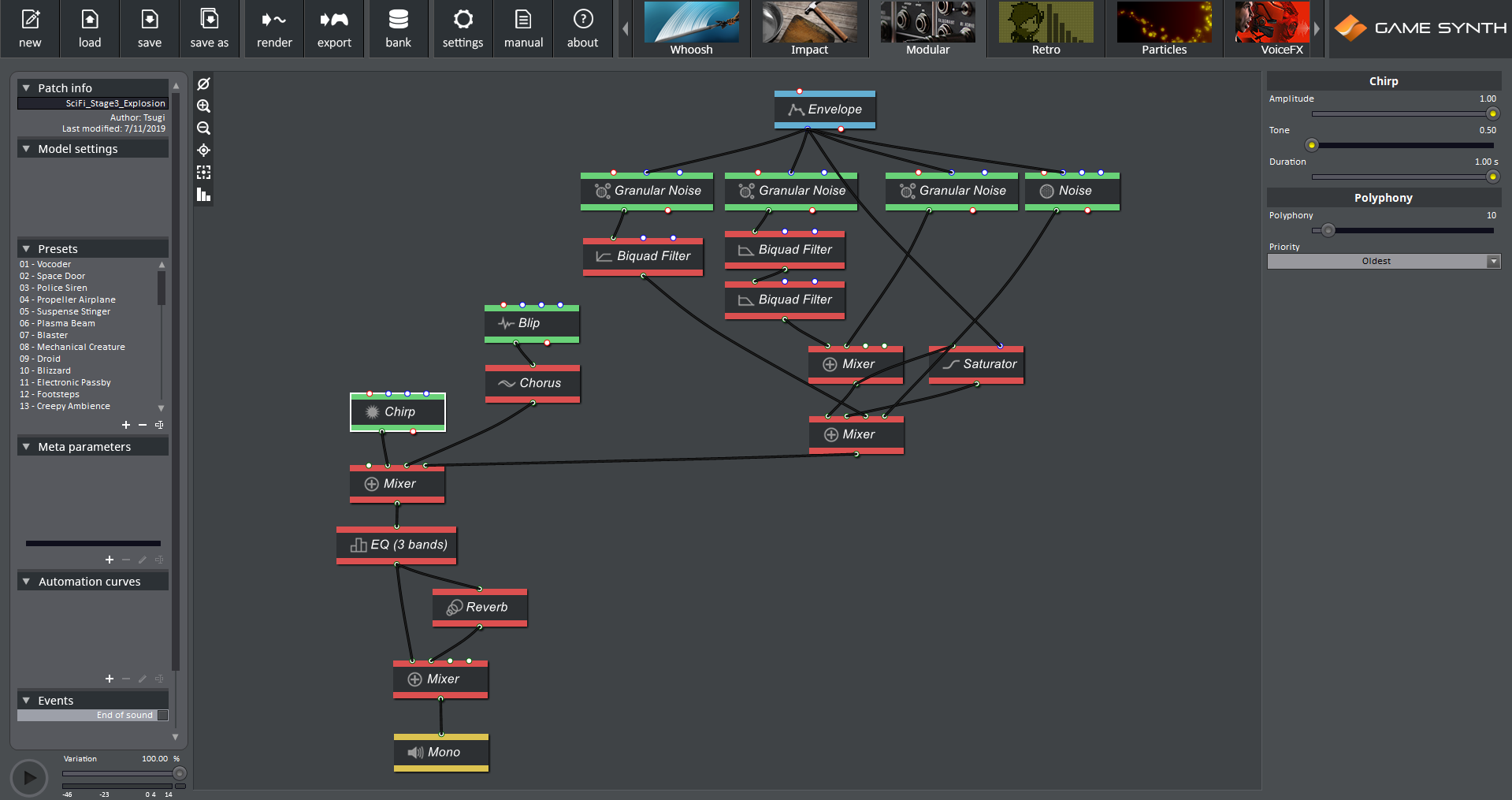 The initial blast consists of a Chirp module. It is mixed with a Blip module which provides the low end of the sound. The body of the explosion is built around several Granular Noise generators mixed together. The final sound is sent through an EQ and a Reverb module to give it the right color and presence.

The explosions in the background are generated by two patches. The first one is a Modular patch in which a Distribution module triggers an explosion a couple of times per second. 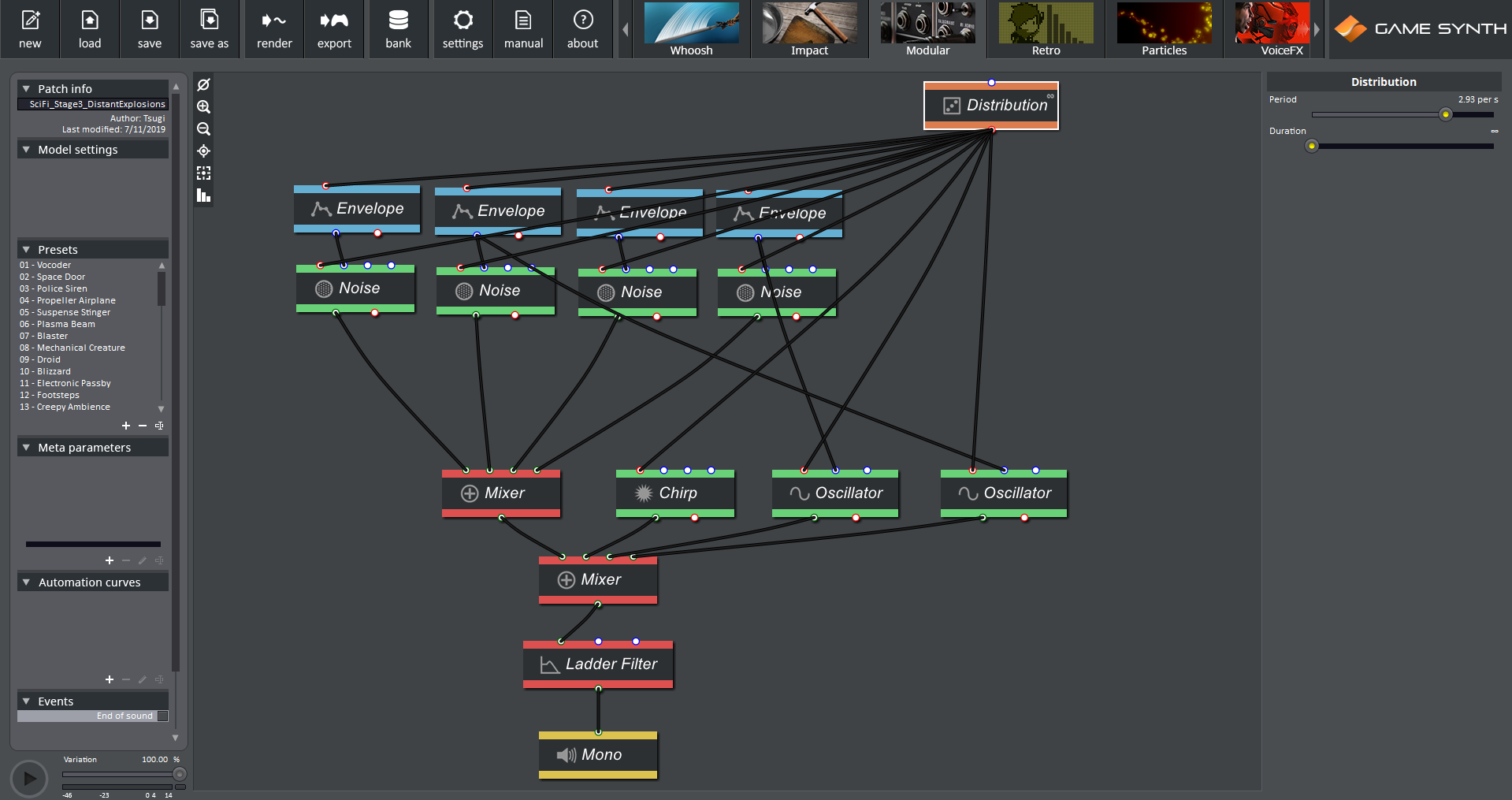 The second patch for the distant explosions uses the Particles model and is based on the “Warfare” preset. It actually uses short Fireworks recordings as sound grains! Simply by drawing on the Sketch pad, you can select the position, tone and volume of the explosions. Since the Particles model offers many modulation destinations for the Sketch Pad, we could also easily control the rate of the explosions, their resonance etc..

Spaceships: Return of the Layers

The big battleship is under heavy attack and is crashing down. 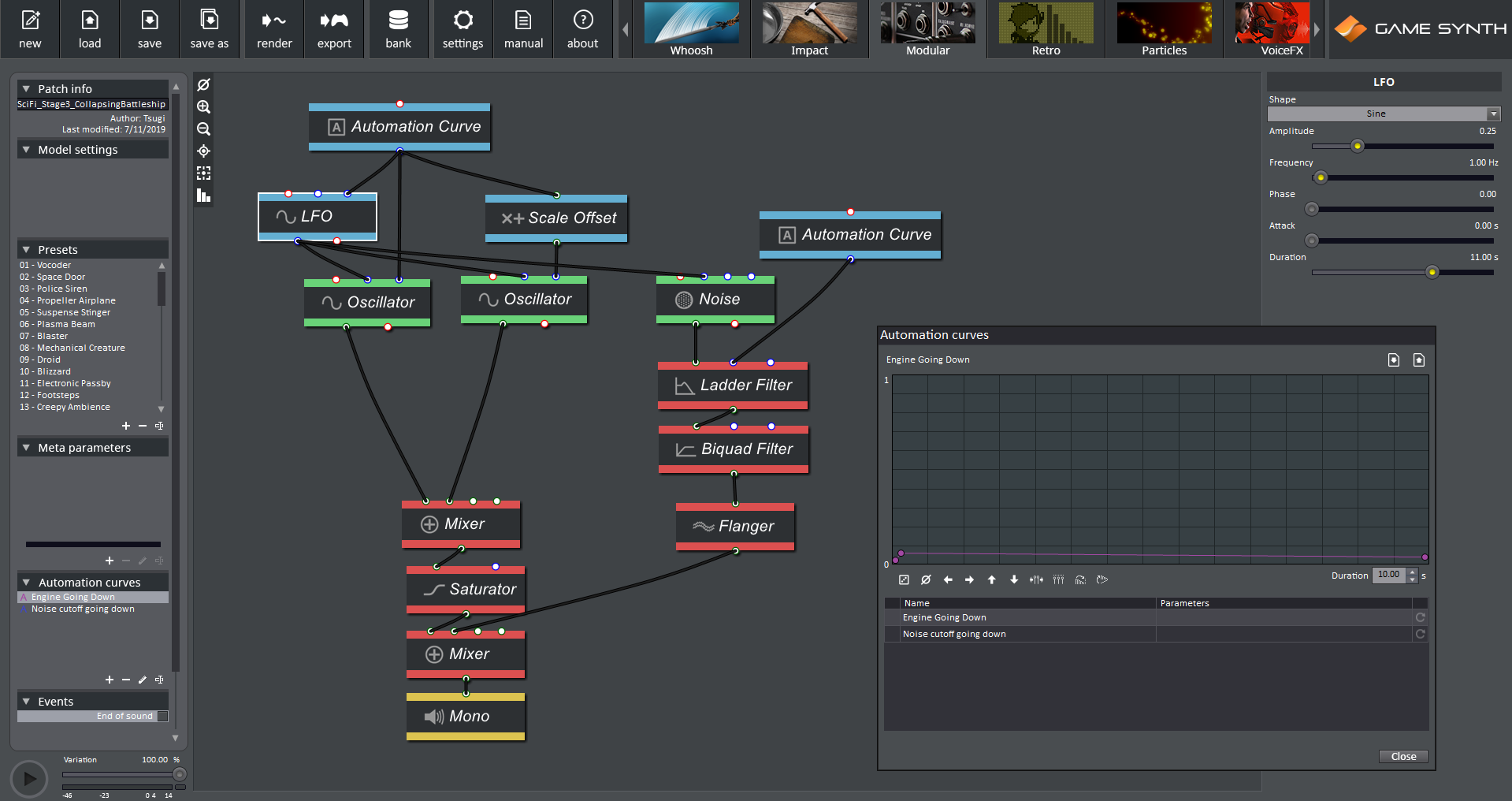 The sound of its engine is reflecting this, as automation curves are slowly modulating its pitch downward. The sound source itself is a mix of saturated Oscillator and Noise modules that create a slightly gritty sound. The amplitudes of these generators are modulated by the same LFO, which provides the pulsating feeling characteristic of an engine sound.

The sound of the smaller ships passing by are designed in the same way as the vehicles from the futuristic city ambiance of the first post in this series. However, this time we created no less than three different layers in the Modular model that we then used as sound sources in the Whoosh model.

The first layer is simply based on the “Jet Combustion” preset. The sound is produced by a saturated noise going through chorus and flanger effects. The envelope in the corresponding Whoosh patch is quite abrupt. All this leads to the creation of a rather aggressive, low frequency passby effect. 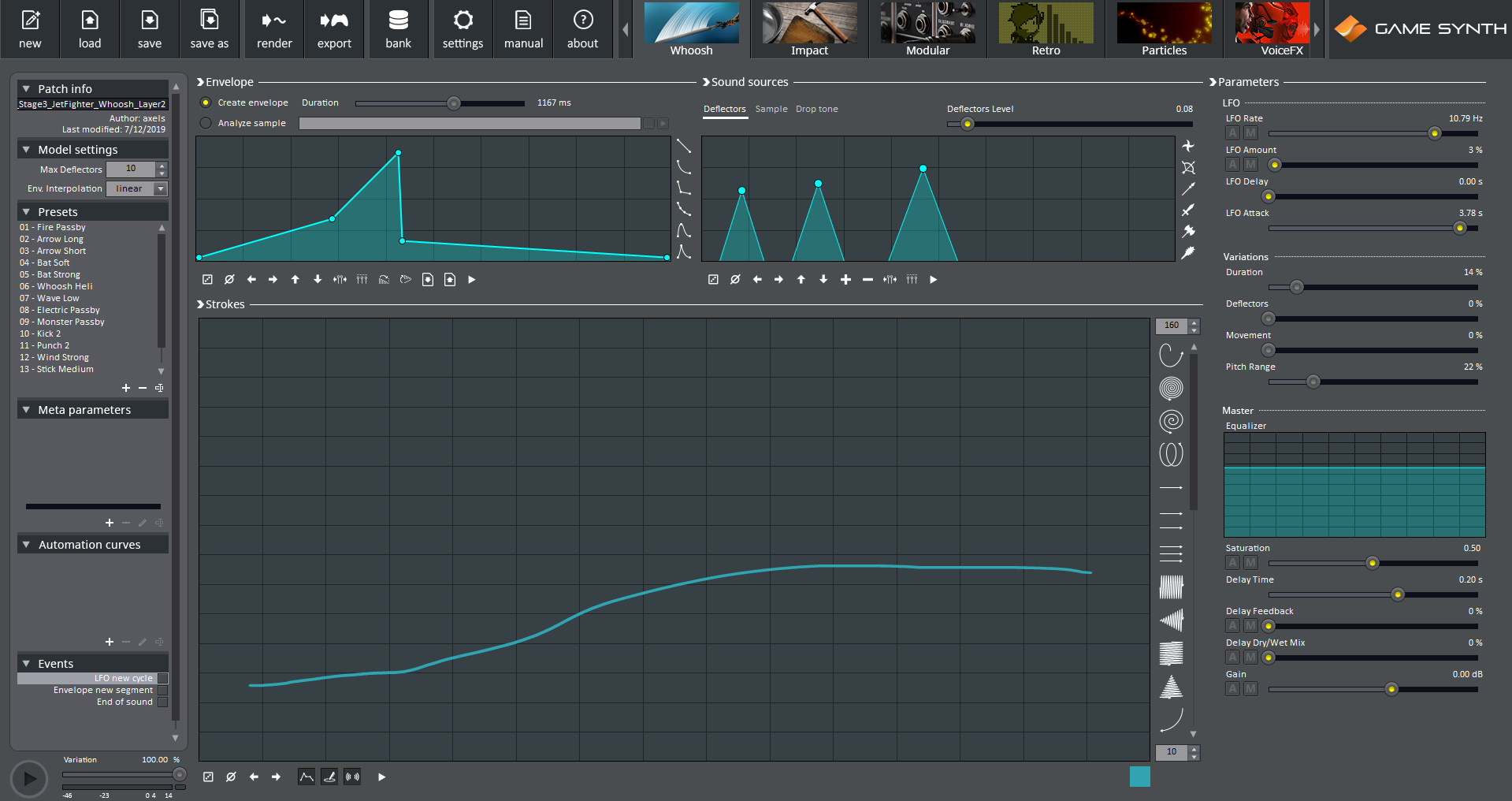 The second layer is similar but with more movement, provided by the modulation of both the Noise module’s amplitude and the cutoff of an extra resonant filter. It is softer and has a higher frequency range but exhibits a bigger pitch change, drawn on the Sketch Pad. 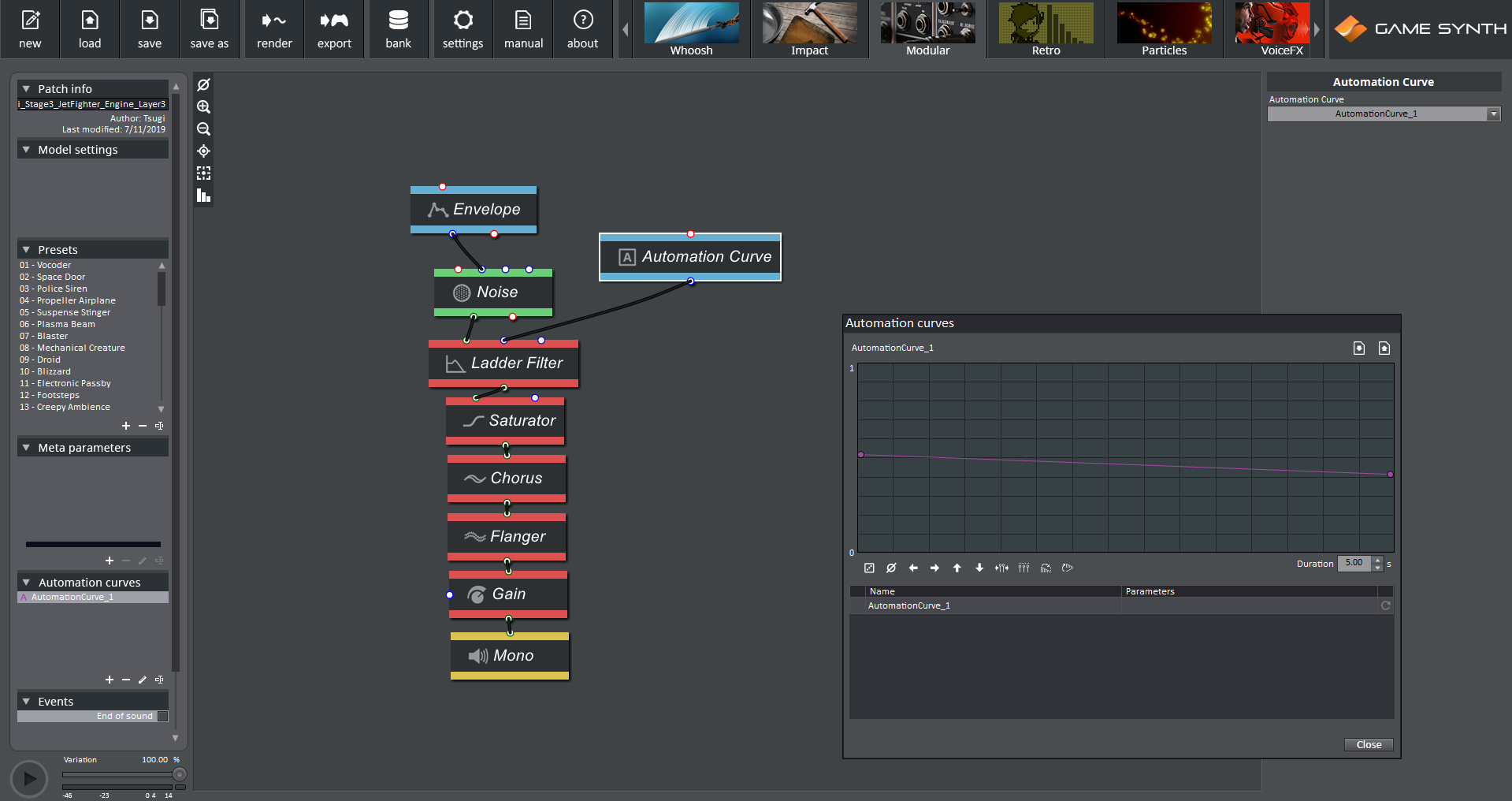 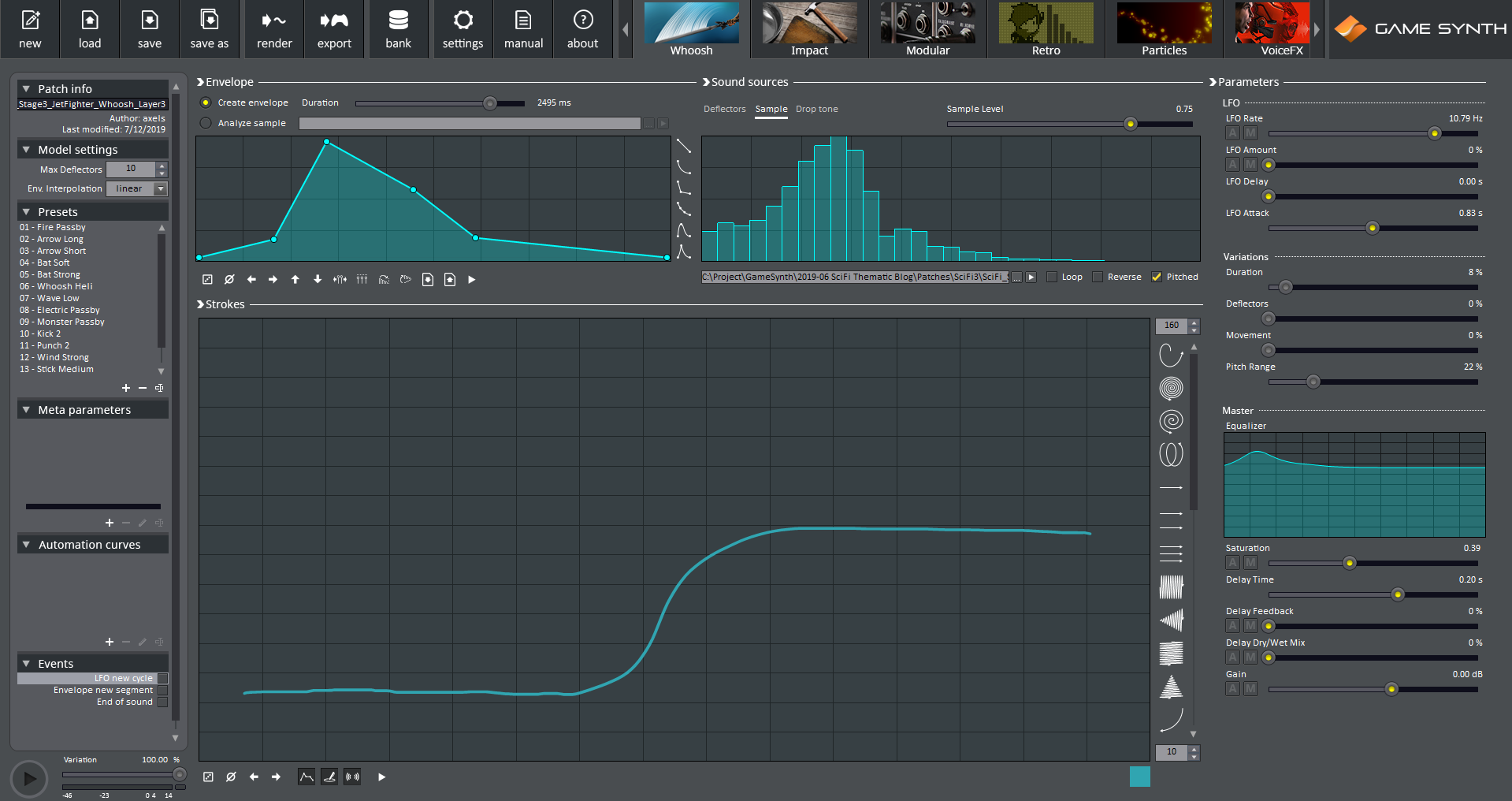 The last layer is built around a Creature module that is filtered to create a breathy, evolving sound. However, once drawn with a quick movement on the Sketch Pad of the Whoosh model and coupled with a drop tone, it produces another very characteristic passby sound. 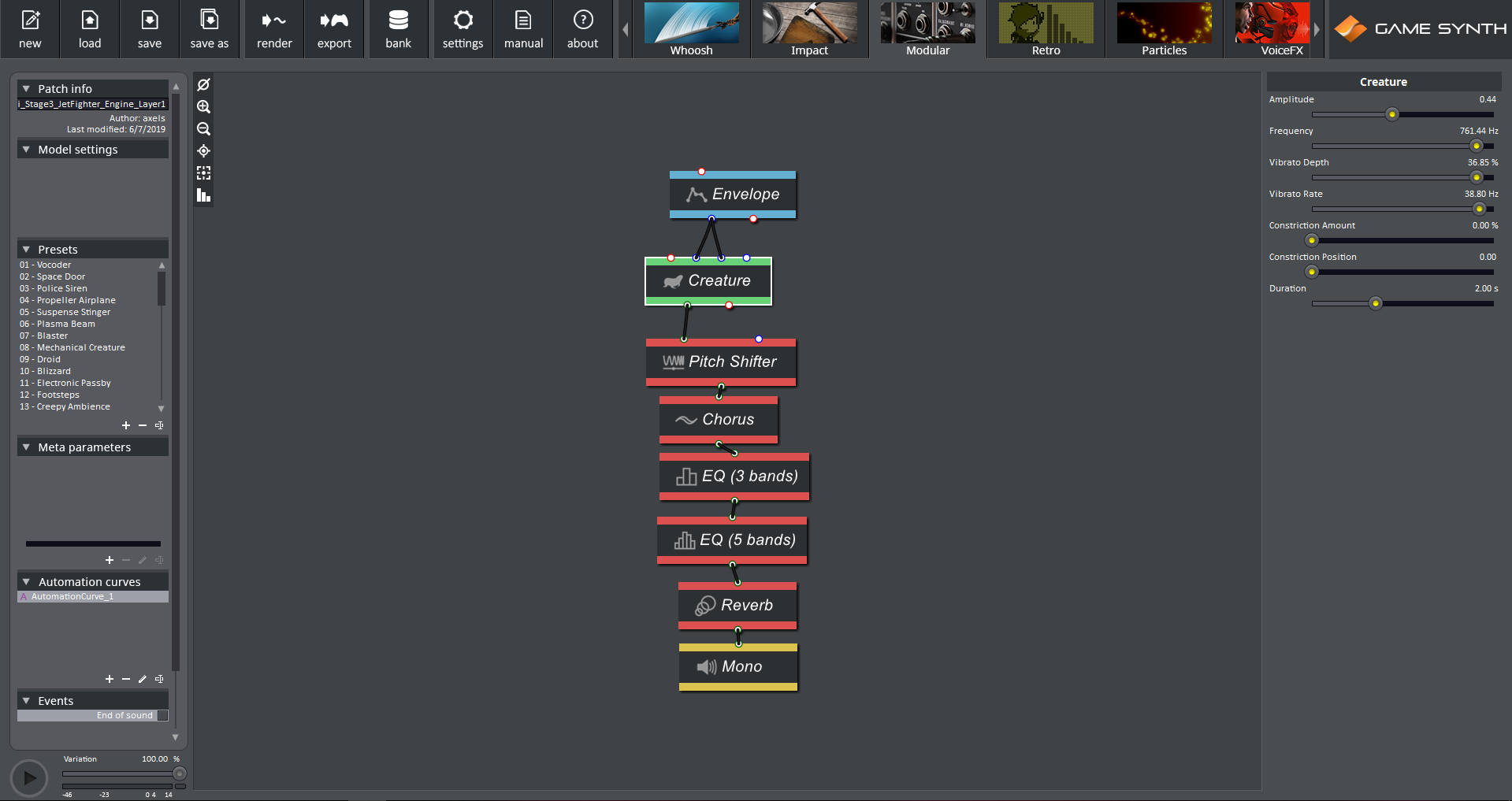 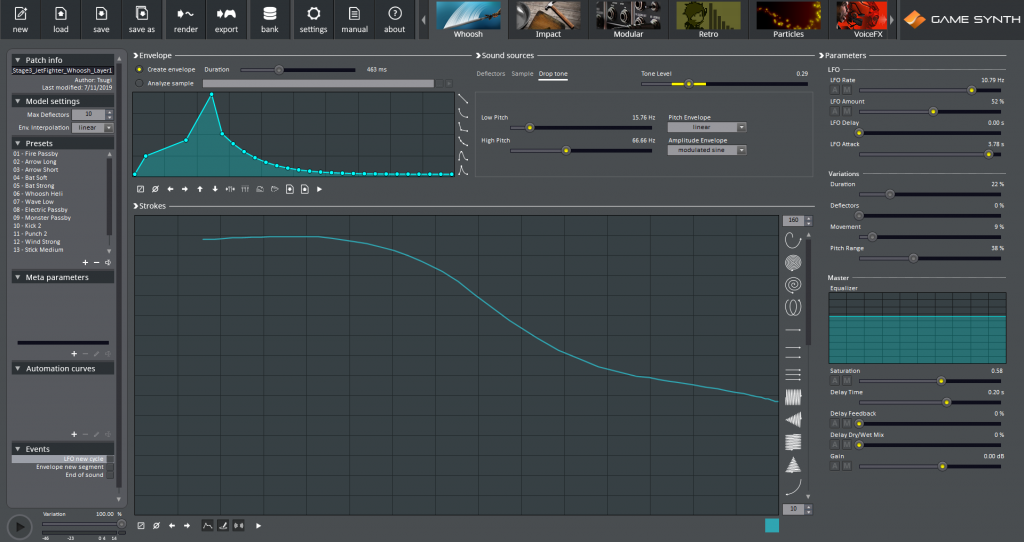 All three layers generate whooshes, but each of them exhibits a distinct audio identity. Combined, they create a very dynamic and convincing passby for these fast, attacking ships.

You can listen to the final result here:

This concludes our post on the procedural sound design of a spaceship battle. We hope this post has inspired you to explore the many features of GameSynth for game and animation sound design and that it will prove useful in your future projects! 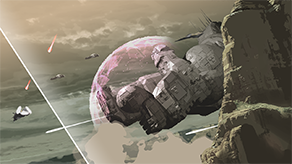 As always, you can download all the patches we built for this animation below:
DOWNLOAD ALL PATCHES
These patches require GameSynth 2019.1 or higher.
In addition, they will all be added to the GameSynth  online patch repository.

In our next and final post of the series, excitement will be at an all-time high as we will encounter aliens, a perfect opportunity to play with the VoiceFX model!