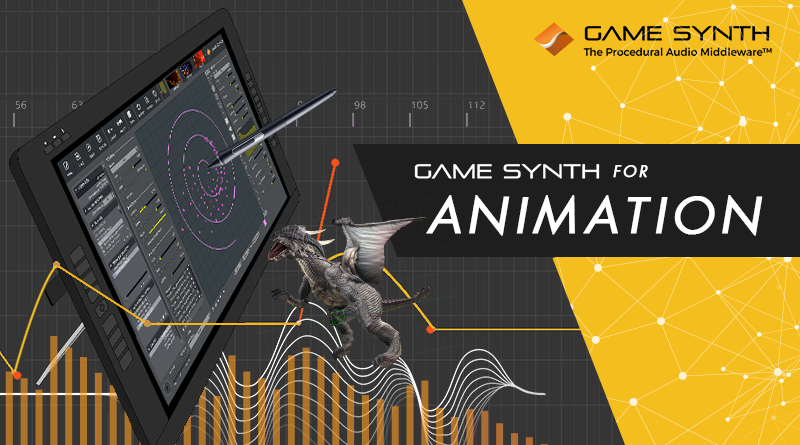 With a very intuitive interface, generators for all types of sound effects, the import of animation curves from popular 2D / 3D packages, fully controllable sounds instead of fixed samples, the automatic creation of sound variations and the support of graphic tablets, GameSynth is the ideal tool for animators, sound artists and game developers who want to create sounds that perfectly match their animations.

A very visual and intuitive interface

GameSynth is a procedural audio tool: it generates high-quality sound effects by synthesizing them in real-time, based on sound models.  By adjusting the parameters of a sound model, the designer can obtain exactly the sound desired. This is far more flexible than trying to record the right sound or editing existing samples.

GameSynth offers procedural audio models for all common types of sound effects in animations (footsteps, whooshes, impacts, particles etc…).  Each model comes with a very unique user interface which makes the creation of sound effects not only faster and more intuitive but also a lot more fun to use!

At the center of these user interfaces is the Sketch Pad; a surface on which you can literally draw sound effects with your mouse or with a graphic tablet – often the animator’s weapon of choice.

The following video shows how easy it is to produce very expressive sounds using a Wacom Cintiq tablet.

Of course, it works equally well with the various Bamboo and Intuos models or other tablets. Simply choose what parameters of the sound model you want to modulate in real-time – based on the position and pressure of the pen – and just draw!

In GameSynth, automation curves offer a way to precisely control sound parameters over time, allowing for the generated sound effects to match your animation’s timing perfectly.

GameSynth is the first sound design tool that allows for the import of animation curves and motion capture files from popular 2D and 3D animation packages and makes it possible to link them to sound parameters.

Since GameSynth is using sound models and not fixed samples, most parameters can be controlled. This has many advantages. For example, if an animation curve is modified or its duration is changed, the sound can simply be recalculated, without having to record new material or to edit existing samples, therefore saving precious time.

Finally, when working on an animation, it is not rare for a movement to repeat itself. This can be the case of a walking cycle for example, or a series of hits during a fight.

Using the exact same sound each time would lead to unsatisfactory results. GameSynth has a built-in system to automatically generate sound variations in these cases. A random range can be assigned to most sound parameters, as well as a global variation percentage. Once set up, a slightly different sound will be automatically played or rendered as a .WAV file each time.

The combination of the procedural audio techniques and unique, animation-oriented features of GameSynth makes it the perfect tool to design sound effects for your animations! You can learn more about GameSynth here and feel free to contact us should you have any questions.