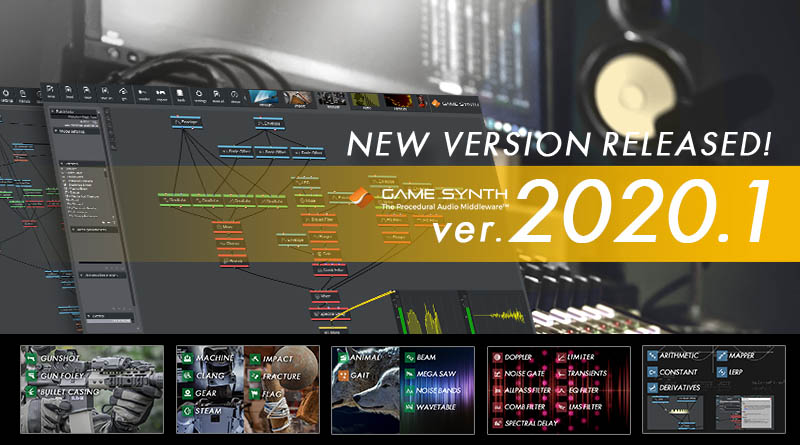 We are thrilled to announce the release of GameSynth 2020.1. Aptly nicknamed “Modular Madness”,  this update focuses on the Modular model, offering a total of 110 modules that can be connected to design any sound you can imagine.

Among the 35 totally new modules introduced in this version are game-oriented generators for the creation of weapons, robots, creatures, and physics-based sound effects, as well as new oscillators, filters, effects and more! New features, such as the real-time visualization of signals in wires and the integrated module documentation will make modular patching a breeze!

Let’s have a tour!

Three new modules – based on military research publications – provide the basis for the synthesis of any firearm sound, from ultra-realistic to futuristic and even cartoonish, thanks to the versatility of the Modular model.

First, the Gun Foley simulates all the sounds associated with the manipulation of a firearm: clip insertion and removal, reloading, pump and bolt noises etc. The mechanical aspect of the sounds generated makes it a prime candidate to create parts for other machines than firearms. For instance, we have used it in robot patches! Then comes the Gunshot module, for which you can adjust the amount of explosive used, the blast radius, the distance etc… Finally, the Bullet Casing module will let you generate the sound of the casings falling on the ground, based on the type of cartridge, the number of bounces and other factors.

From heavy machinery  to giant robots and steampunk ambiences, our next modules will bring the (industrial) revolution to you! Clang creates heavy metallic impacts, Machine simulates the sounds of heavy metal work, and Gear is perfect to add a sense of automation to your patches. Used in conjunction with the new Steam generator , these modules can help you to recreate any type of machinery!

Our next 3 modules are great to create sounds linked to physics-based events. Fracture generate the sound of various materials (wood, fibers, rubber, metal…). It’s perfect to design the sound of a creaking door or the bridge of a wooden ship. Impact synthesizes noisy impacts based on modes having  a bandwidth, friction etc… Finally, Flag simulates the sound of fabric in motion, from flags in the wind to cloth Foley and drapes.

Although it was already possible to generate creature sounds, two new modules are poised to make it even easier and more fun! Animal generates the source signals for animal and monster vocalizations. It has a large range of usage, from the tweaking of birds to the howling of wolves and roaring of trolls! The secret is in the modulation of its many parameters. Gait is not an audio generator:  it creates logic and control sequences that simulate the walking or running pattern of an animal. Combined, these two modules can create some realistic or frightening creature sounds!

A couple of new oscillators that generate signal that are particularly rich in harmonics will allow you to create fat synthetic sounds. The Beam oscillator generates its signal by summing 2 saw oscillators and having the resulting pulse-like signal modulate the frequency of a sine wave (just listen to it, all questions will evaporate!). The Mega Saw oscillator mixes the output a sawtooth oscillator with several detuned versions, both lower and higher in frequency. It is reminiscent of a type of oscillators that can be found in some musical synthesizers and is great for pads!

In addition, the new Noise Bands module mixes several fluctuating noise bands to create a rich, evolving signal. As for the Wavetable module, it plays back sample data while allowing a signal to control the reading position and speed of reading. This is a very versatile module that can be used for instance with short waveform cycles to create new types of oscillators, or with longer samples to simulate tape recording or even scratching effects.

GameSynth 2020.1 brings new exciting effects to the Modular model. The Spectral Delay module applies a delay effect independently to each frequency band of the input signal. For each band, the level, delay length, and feedback can be adjusted. The Doppler module simulates the pitch change that is perceived as a sound source passes by a listener, also known as the Doppler effect. The Transients detects and amplify transients and a new Limiter module with lookahead, as well as a Noise Gate module have also been added.

The new math modules allow for an increased level of control in your patches, by allowing operations on control signals. Constant and Arithmetic are self-explanatory. Derivatives can generate a speed or acceleration curve from an input signal and thus is very useful when creating patches for animations. The Mapper module maps an input signal on a mathematical curve or a custom envelope. The Lerp module is a classic linear interpolator. It can be used to create envelope variations by interpolating randomly between two exiting envelopes (this is a really neat trick about which we will talk about in a future post).

There are other new modules, such as Pattern to create sequences of logic signals or Tempo to analyze the beat of a sample or signal, but we will let you discover them! In addition, some existing modules have been greatly improved as well. This is the case of the Granular Player for example, which now offers various sample selection modes, including one from a control input, fading of the grains, and more… Other notable additions are a Vocalization parameter for the Creature to adjust the overall shape of the vocalization generated, a new Entropy analysis for the Curve module, and the ability to save and load the event lists of the Sequencer module.

In addition to all these new modules and improvements, several exciting features have been added to the Modular model itself. We will examine two of them in this post. One of the most visible additions is the real-time visualization of a signal when hovering over a wire during playback. This is a very handy way to quickly check signals while designing your patch or debugging it, and it will probably greatly speed up your patching!

Another big help during patching will undoubtfully come from the new, integrated documentation. First, you can now access the “Introduction to modular patching” documentation directly from the context menu of the modular model.

Moreover, you can also consult the documentation pertaining to a selected module directly by clicking on the question mark located on top of its parameter window, or via the “Read about module” command from the context menu. The description of the module and of its inputs / outputs / parameters will then instantly be displayed. Inputs / outputs are also color-coded to reflect their type (audio, control, or logic).

To learn more about GameSynth and all the other models it includes, check its web page.