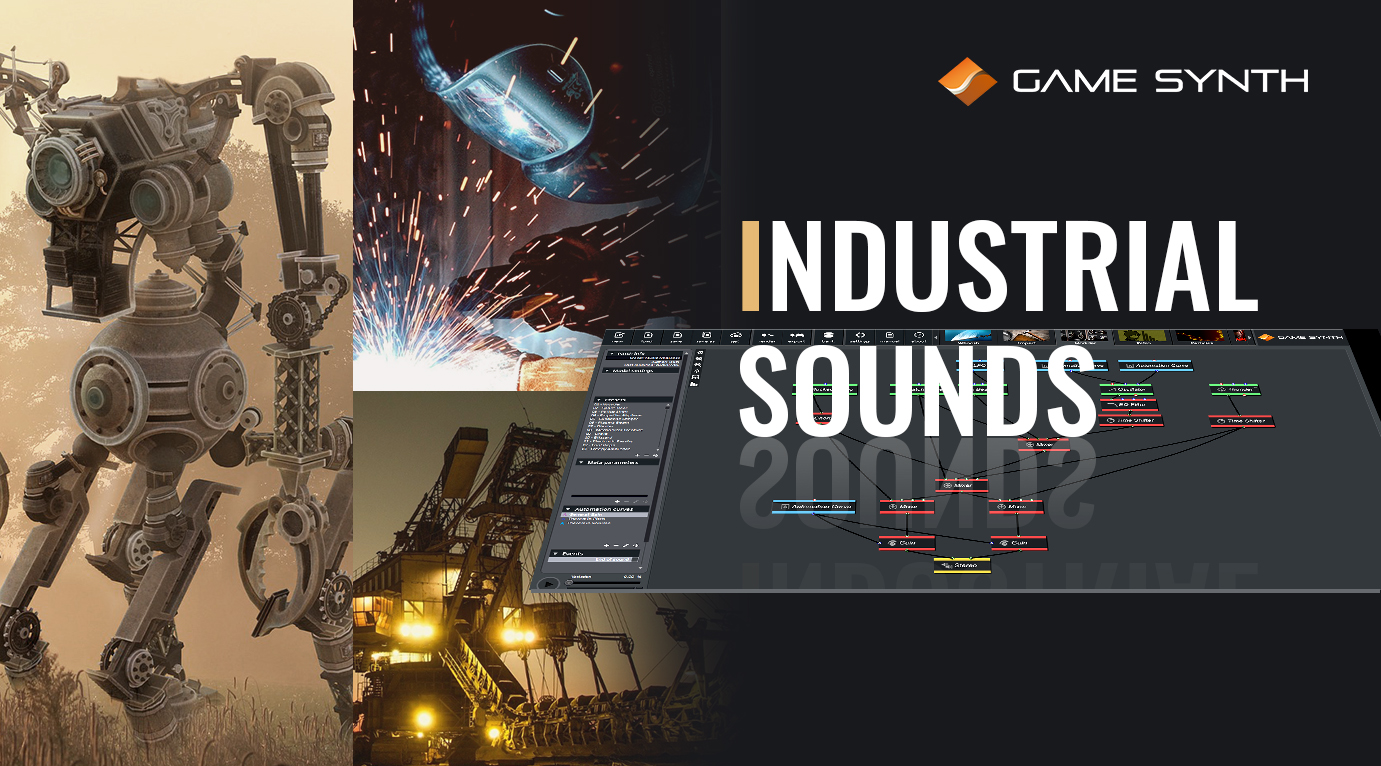 Machine is a harmonically rich sound generator with a good selection of input pins for control. When various envelopes are applied to the inputs, we can create a very expressive industrial pneumatic sound. Throttle and Speed both control pitch and timbre, but in different ways. Increasing the Speed increases the pitch, whereas increasing the Throttle decreases the pitch. Listen to the examples below to hear the effect that this has on the sound. The Tone slider simply controls the brightness of the sound.

Gear offers some satisfying dynamic clicks. Most of the sliders are designed to control the action of the mechanism, such as Speed, Light click, Heavy click, and Fluctuation. Each click is made up of a balance of low and high-frequency layers (Heavy click and Light click, respectively). Fluctuation then applies some modulation to the amplitude and pitch of each click, which can be used to create the impression of a less perfect gear. Pitch and Metallic offer tonal shaping, with the latter controlling the resonance of the click.

Clang is a new chunky impact generator made up of two components, Crank and Impact. Crank is the brighter resonant part of the hit, and Impact is the noisy bassy part. Force, Tone, and Size control the timbre of the sound, with Force implying the magnitude of the strike. Tone affects overall brightness, and Size has a subtle effect on the pitch.

And the Steam module gives us two noisy aerosol bursts. Both bursts are customizable via Initial burst and Close burst (which sets the amplitude of each), and Valve open and Valve end (which sets the length in seconds of each). The Cylinder diameter and Cylinder length can be tweaked to change the character of the sound, with smaller dimensions resulting in a hiss, and longer ones resulting in more of a gust.

Using Gear and Clang as the base of our patch, we can easily mimic the sound of a roller shutter opening or closing. Applying some Gun Foley sweetener and a very short 60Hz Oscillator for a bassy thud soon results in a fully fleshed-out mechanism.

A Sequencer and Switch combo allow us to easily change our beginning and end sound generators, for when we need to synch our sounds to animation. This combo, combined with an Automation Curve, makes it easier to understand and adapt the patch to the specific needs of any given project.

Finally, to make our sound seem as though it’s in a small factory, we can use the Cabinet module. This module can be tweaked to simulate resonant cubic spaces, from small instrument bodies to large reflective rooms. It is an excellent glue for machinery sounds, which are often in reflective factory settings.

Mecha footsteps are an ideal candidate for the Machine module. In this GameSynth preset, different modes of movement are simulated by using creative envelope shapes on the Throttle input.. Combining this again with Clang and a short 60Hz Oscillator gives us big imposing mechanical steps.

Unlike in the Roller Shutter example, this patch makes use of a Clock to control playback, with several Timer Shifters offsetting the impact components. GameSynth offers many different approaches for triggering playback, and this is just a different approach with the same outcome.

Our final example is another GameSynth preset. It makes use of a bit of everything: Motors, Gear, Machine, and Steam. The Steam module is a great way to imply that energy being released. After the Motors and Machine have powered up in rich harmony, the rest of the generators breathe a noisy and textured huff.

This patch is pretty straight-forward. Besides its generators, it uses an orchestra of control Envelopes, Mixers, and Gain adjustments to precisely shape each element.