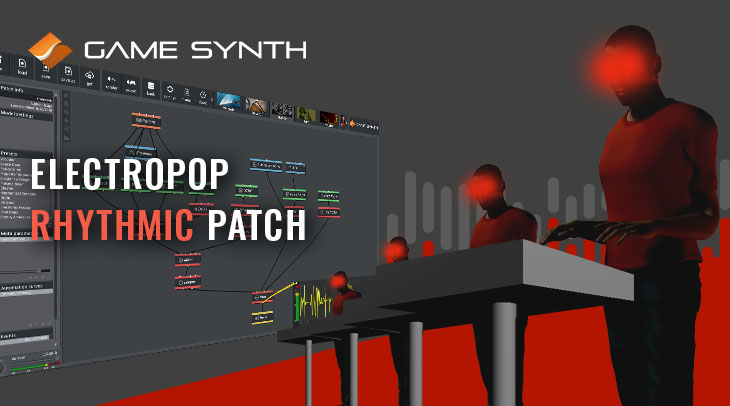 In this installment of Patch Anatomy, we will dissect an electropop rhythmic sequence – slightly reminiscent of Kraftwerk – which makes good use of several new modules from GameSynth 2020.1. First, let’s check it out! 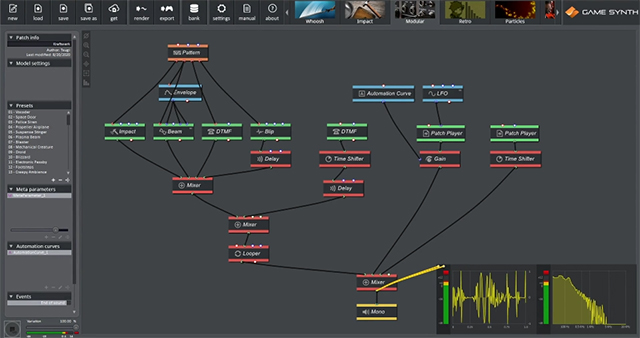 The sequence first plays a drum pattern, followed by series of reverberated phone tones. This is repeated once, before a final retro computer sound is played. Let’s see how we built all these components!

The new Pattern module is an obvious choice when creating rhythmic sequences in GameSynth. It can be used to generate musical phrases of course, but also to design mechanical sound effects and more. Here, we left the tempo at 120 BPM, selected an 8-beat pattern, and made it loop 4 times. Each of the 4 rows of cells displayed in the editing window corresponds to one of the trigger outputs of the module. It is possible to add / erase events simply by drawing with the mouse.

The first row of the pattern corresponds to a bass drum sound. It is generated by the new Impact module, set up with low mode frequencies, and relatively short attack and decay durations. The second row of the pattern triggers a Beam oscillator, another recent addition to the Modular which creates harmonic-rich signals. An Envelope, triggered simultaneously, modulates the amplitude, width, and slope inputs of the Beam module to create a short sweep. The third sound in the pattern is a single phone tone created by the new DTMF module. Finally, a good old Blip module adds a touch of FM synthesis (with a bit of feedback for a grittier sound). 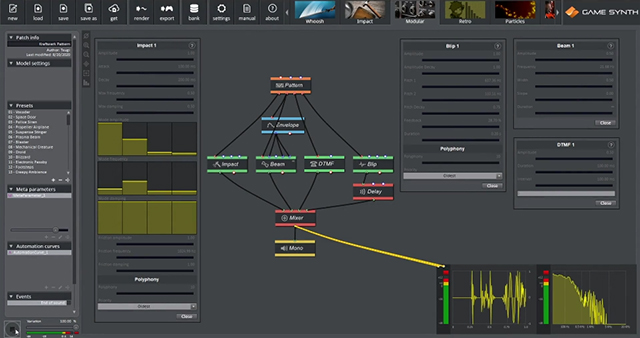 Once the drum pattern has looped 4 times, a sequence of distant phone tones is played. The ideal candidate for this is of course a DTMF module (DTMF stands for Dual-Tone Multi-Frequency, which is a type of signal actually used in telecommunication). The digits of the phone number have been adjusted to complement the drum pattern. The Delay module adds a sense of space and distance.

The Time Shifter module is used to ensure that the playback of the phone tones starts after the rhythmic pattern. Then, to repeat this sequence, we simply need to mix the drum pattern and the phone tones, and send the result to a Looper module.

The pads are generated by a Particles patch which is then played back in the Modular model via a Patch Player module. We already used this trick in Patch Anatomy #1 for the pads of the creepy music.

In this case, we also modulate the pads in amplitude with a sine shaped LFO, which gives them more of a shimmering feel. The pads are heard during the rhythmic pattern, but we don’t want them to play over the phone tones break. An Automation Curve controlling a Gain module is used to achieve this. 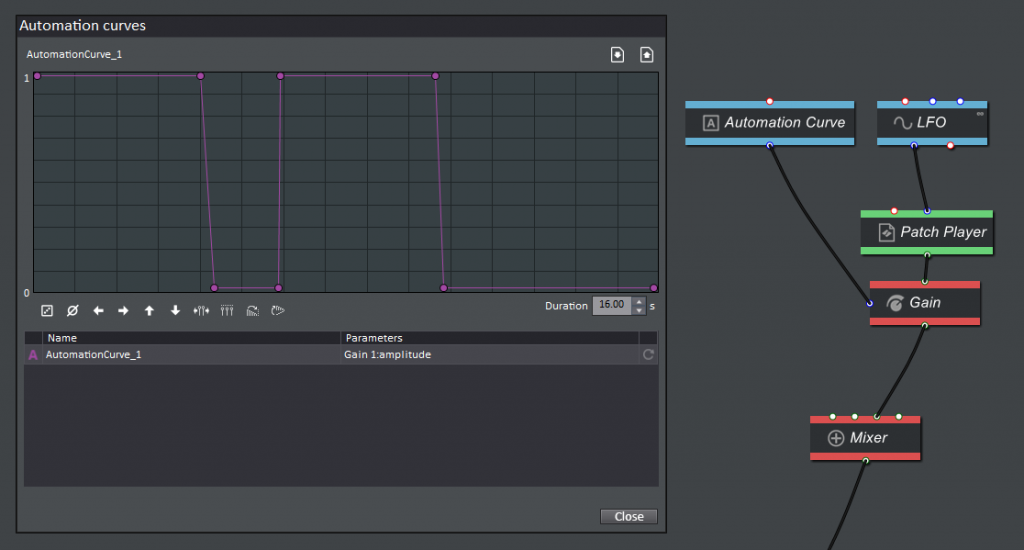 The sequence concludes with an old-style computer sound based on the SuperComputer preset from the Retro model. This is a good example of usage of the arppeggiator included in this model. 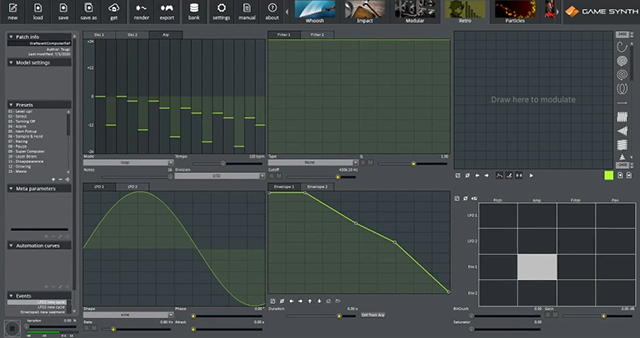 Finally, all these elements (drum pattern and phone beeps, pads, computer sound) are sent to a last Mixer before reaching the output.

That’s all! As always, we hope that this post gave you some ideas to build your own patches in GameSynth. You can download all the files below and don’t forget to regularly check our blog for new episodes of Patch Anatomy!