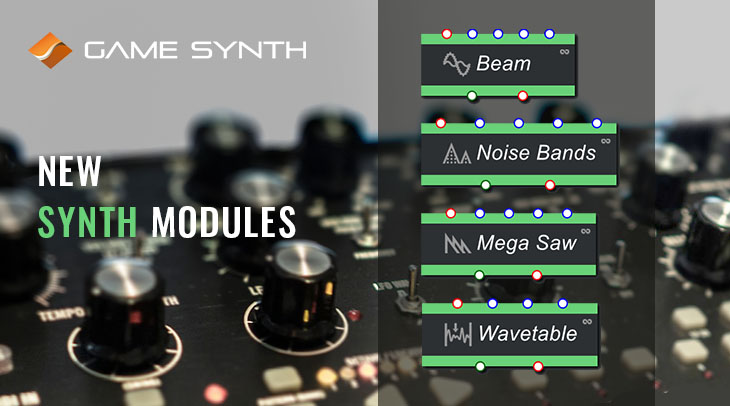 GameSynth version 2020.1 dropped with four new powerful synth generators in the Modular model: Beam, Mega Saw, Noise Bands and Wavetable. Several classic synth modules have also been included for shaping and triggering the sound, such as a new ADSR envelope, Allpass, Comb, and EQ Filters, as well as a logical Pattern module.

Beam is a new synth module that generates rich waveforms by modulating a sinewave by the sum of two saw waves. This interrelationship between waveforms leads to exciting results, even with the smallest of parameter changes. Width controls the duty-cycle of the modulating pulse, and Slope determines its slant direction. Since this module isn’t trying to emulate a specific sound type, the details of what each slider does aren’t as important as experimenting and learning its sonic signature.

Mega Saw is another musical synth module that generates rich signals by summing together seven saw waveforms. Frequency determines the center pitch, and Detune controls the distance between the three overtones and the three undertones. Mix controls the amplitude of these surrounding waveforms, with a value of 1, resulting in them all peaking at the same level. 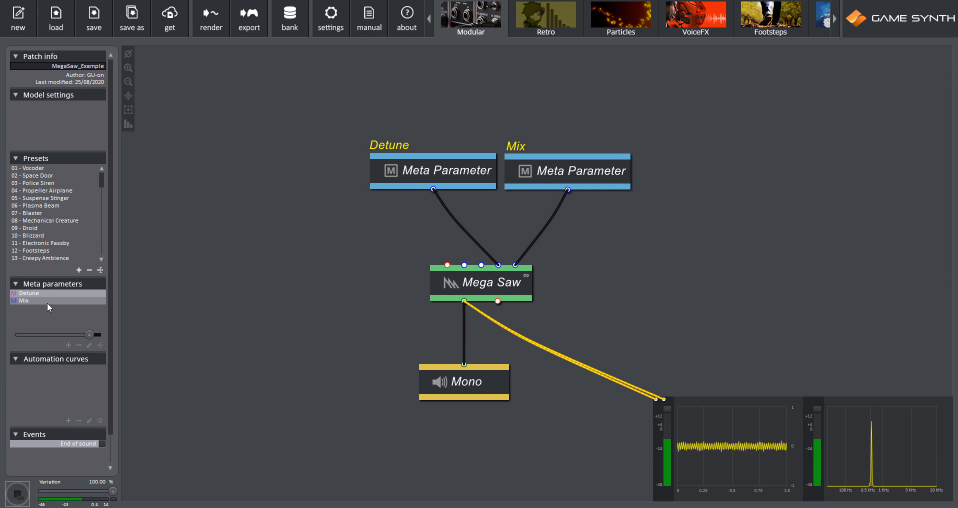 Noise Bands is based on the same principle as the Deflectors in the Whoosh model. Several bands of noise are defined on a graph, where x is pitch, y is amplitude, and z is bandwidth (or filter steepness). A primary feature of this module lies in its ability to define the fluctuations of these three components, with extreme settings resulting in a gale-like effect. 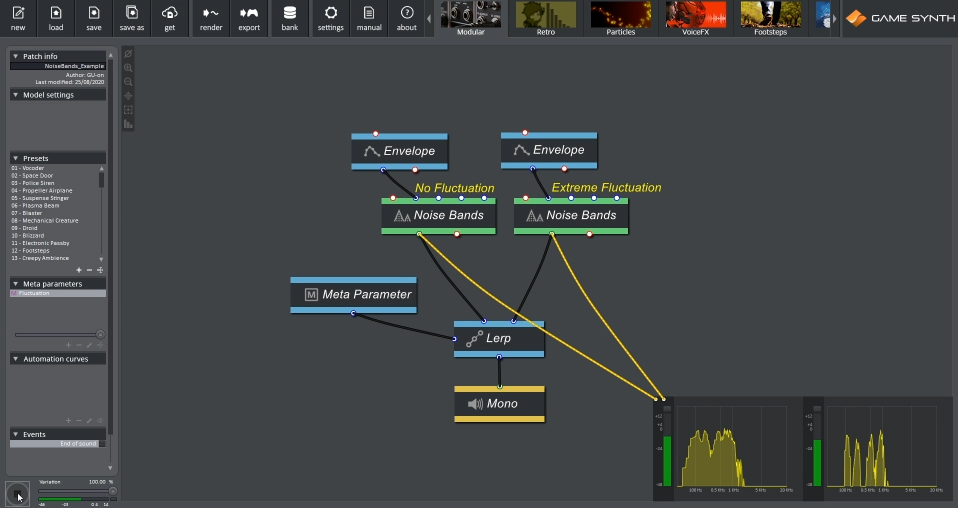 Wavetable is a synth module that uses sampled audio as its source. With short waveforms, we can generate new pitched periodic waveforms, controlling the pitch via the speed parameter. With longer waveforms, we can create a dynamic record-scratch effect, as we showcased in our Procedural Audio Math 101 blog.

To control these modules, we have a new traditional ADSR module that works much like GameSynth’s existing Envelope, but with attack, release, decay, and sustain parameters familiar to anyone who has worked with other synthesizers. An added benefit of this module is that we can apply random variation to all the segments of the envelope.

We also have Allpass, Comb, and EQ Filter modules for shaping our sound. Allpass Filters work, not by adjusting frequency gain, but by changing the phase relationship between frequencies. Comb Filters create comb-like phase interference by applying a delayed version of the signal to itself. And the new EQ Filter offers a highly customizable EQ, with a choice of filter type, slope steepness from 12 to 36 dB/octave, and several inputs for external control.

And finally, for triggering our synths, we have a new Pattern module. This module works like a grid-based drum sequencer, wherein we can define our tempo, number of beats per loop, and the total number of loops.

Our previous blogs have showcased the effectiveness of synthesis for creating real-world sounds; however, synthesis really shines when producing aggressive other-worldly sounds. In this patch, Mega Saw is generating a complex signal which the EQ Filter steeply sweeps through. A Gain module controlled by an Envelope sets the amplitude of the signal over time, and Saturator and Reverb modules brighten and color the final sound. The result is an ominous metallic bellow that wouldn’t feel out of place in a gritty robot fight scene. 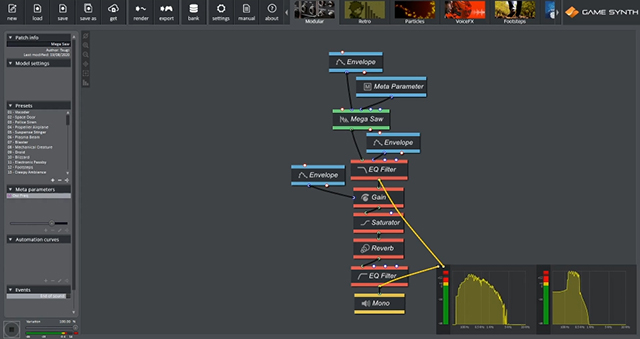 This patch makes full use of procedural synthesis and randomization to create endless sci-fi weapon variations. Gunshot and Gun Foley provide the transient textural components, and Beam and Oscillator provide the harmonic parts. Lerp controls pitch randomization for Beam by having variation applied to its ratio slider. Then, since there are two Envelopes, both of which descend, the pitch always decreases to create that iconic “pew” effect. This same result couldn’t be achieved by applying variation to the frequency slider in the Beam directly, since the pitch would remain static. 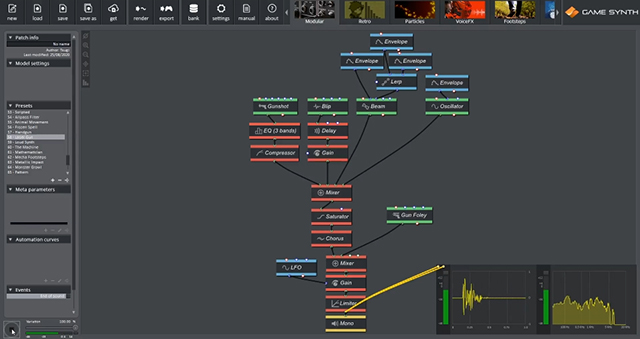 Of course, the new synth modules are great for musical applications. In this example, Mega Saw is being used to generate a subby kick sound, with a Selector and some Constants being used to alter the pitch rhythmically. A short Envelope on the Noise Bands module with some thin bands is generating the pitched percussive part. The final sound is being produced by two sources, Footsteps and Granular Noise. These create a snare sound, with the former providing impact, and the latter providing crackle. Altogether, these are rhythmically triggered using the new Pattern logic module, which can quickly be tweaked to provide new drum loops. 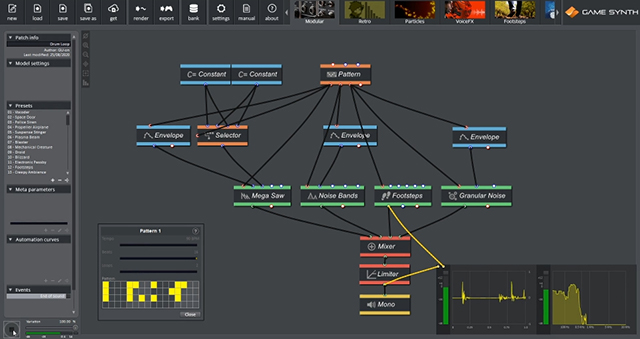 The new Allpass and Comb Filters are excellent sound design tools if you have a bit more time to spend. They aren’t as immediately intuitive as many of the other audio processors, but this is because they are a building block of DSP effects (such as for algorithmic reverb). In this example, a combination of parallel Comb Filters and sequential Allpass Filters are being controlled through a mix of hard-coded values and real-time Meta Parameter control. By live controlling the inputs in this way, we can get a sense of what effect these modules are having on our sound. A Gear sound source is being used to test the filter setup, but this can easily be replaced with any other source. The result is a metallic-sounding resonator that is coloring the sound in unique ways. 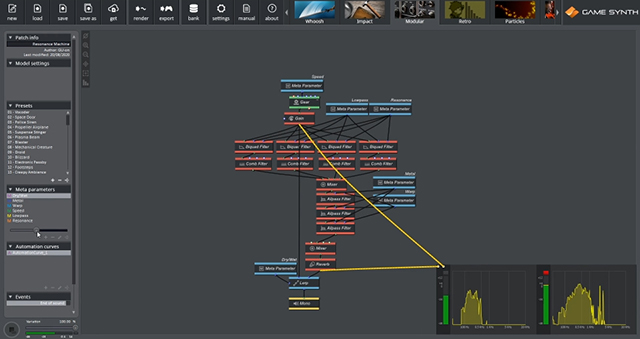