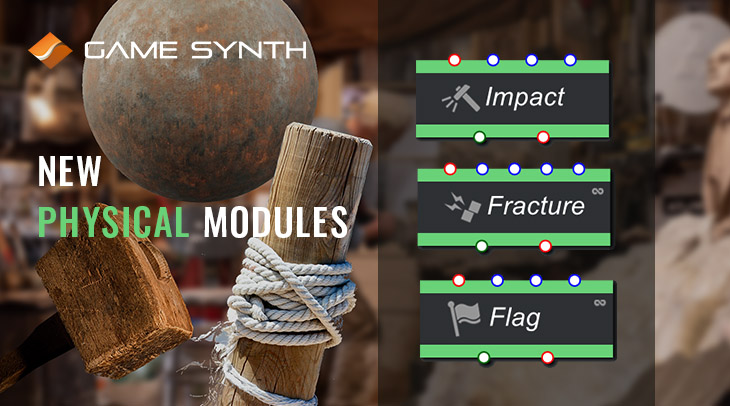 The final part of our introduction to the new modules in GameSynth 2020.1 brings with it Impact, Fracture, and Flag. These modules make use of physically informed modeling to create realistic and customizable sounds.

The Impact module generates a noisy hit accompanied by a modal resonance. It features some standard envelope parameters: Attack, Decay, and Amplitude, as well as global controls for frequency and damping. The character of the sound is designed via three sets of four graphical sliders to control the amplitude, frequency, and damping of the modal components. The two sliders on the left in each instance control the resonant modes, and the two on the right control the noise shaping. There are also three additional sliders to control amplitude, frequency, and damping for the Friction component of our sound. This aspect becomes audible with longer Attack times and manifests itself a bit like the friction of a match being struck. 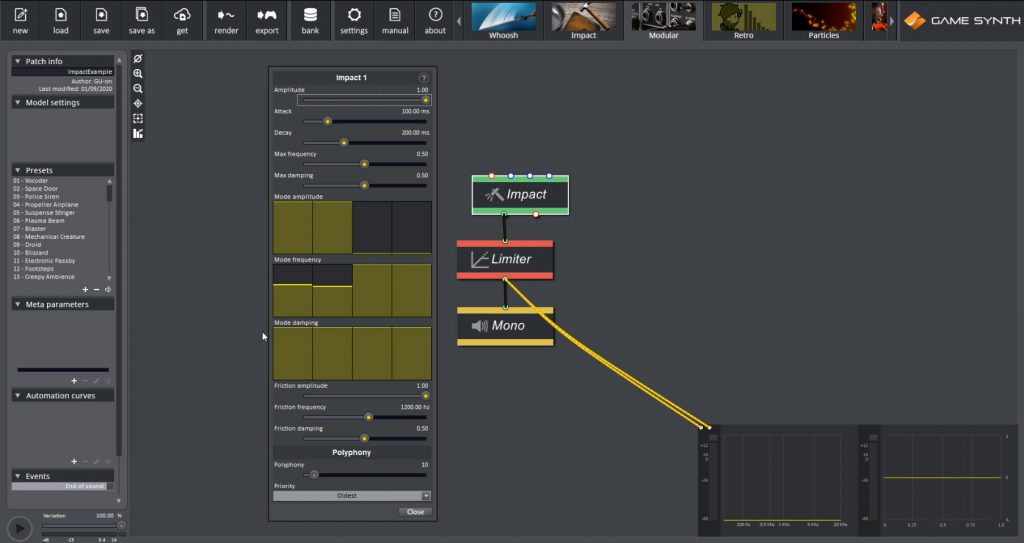 Fracture can be used to generate the sound of various Materials under frictional stress, such as wood, fiber, or metal. Speed and Fluctuation control the rate and randomized offset between each frictional click. These parameters can be used to imply changes in tension when used with control signals via the respective inputs. Size affects the tone, with lower values giving a slightly darker tone, and Crack works as a low-pass filter, allowing more high-frequency content through at higher values.

Flag is a simple new module that generates the sound of a piece of cloth billowing in the wind. Control for this module comes in the form of tonal shaping. Surface area offers a fuller bass response at higher values, and Speed effects high-frequency presence, with higher values creating a more saturated result.

This patch uses the new Fracture modules to create the frictional sound of rope being twisted. Each module uses the same Natural Fibers material but adjusts the Size and Amplitude values to create a richer layered effect. Several Envelopes then work in tandem controlling the amplitude, speed, and crack over time, to create a natural-sounding performance. The addition of some Granular Noise helps to make everything feel more substantial, and a final pass through the EQ Filter and Limiter glues it all together. 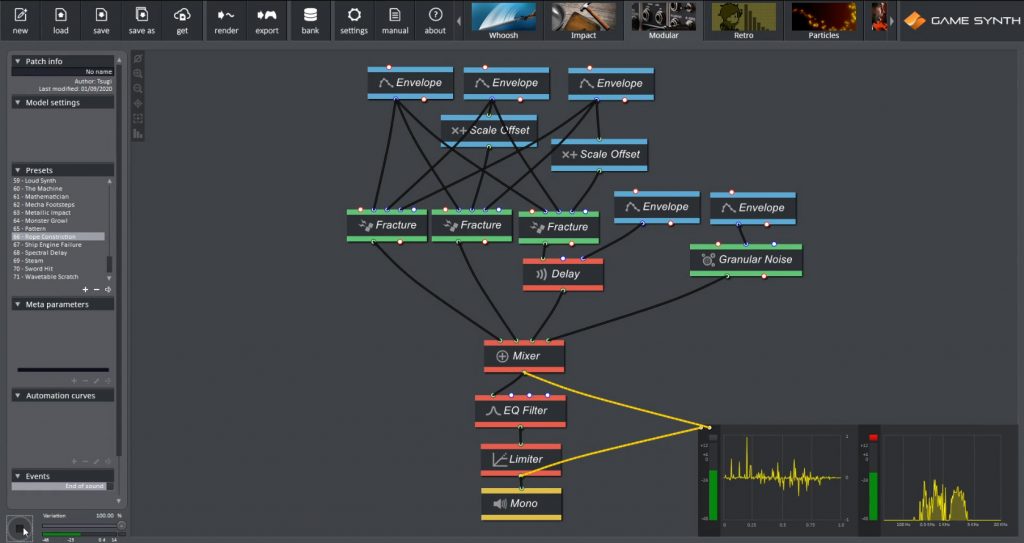 Since the Flag module generates the sound of billowing cloth, it serves as a great starting source for creating clothing Foley. In this example, we capture the chaotic amplitude modulation of the Flag module and use it to control and match other modules using the Env Follower. The resultant signal is then smoothed with a low-pass Biquad Filter and tailored with a Mapper to modulate the Noise Bands. The playback of this patch is finally controlled via a Gain module linked to a Meta Parameter, emulating the effect of cloth moving. 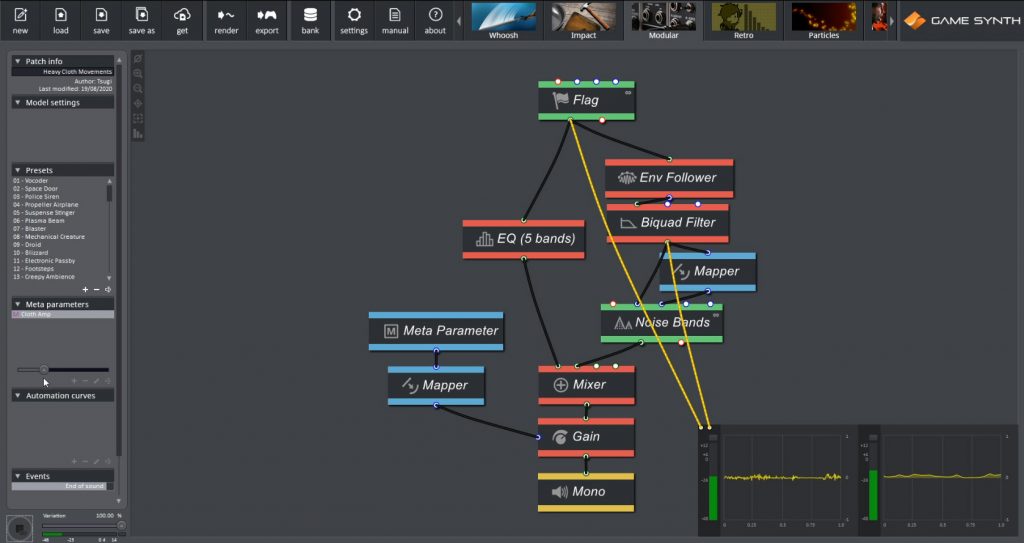 Creating frictional sounds is not only limited to the Fracture module. In this simple example, we are using a Sequencer to trigger an Impact module, with output values increasing the amplitude. This approach is significantly more granular and can be ideal for short interaction sounds.

Because the new Impact module has both harmonic and noise-based components, it’s great for designing punches and hits. Noisier signals provide snap and texture, and harmonic signals give sounds a sense of weight. The addition of the Chirp and Oscillator modules further emphasizes these points. Several other processes are then used to make the punch hit harder. The Transient module affects the first Impact by boosting peak transient parts of its waveform. This process helps it to cut through the mix and better balance with the second Impact module. Time Shifters then separate the other generators, giving the different components time to breathe; and Saturator, Reverb, and Delay modules are used to thicken and spatialize the final playback. 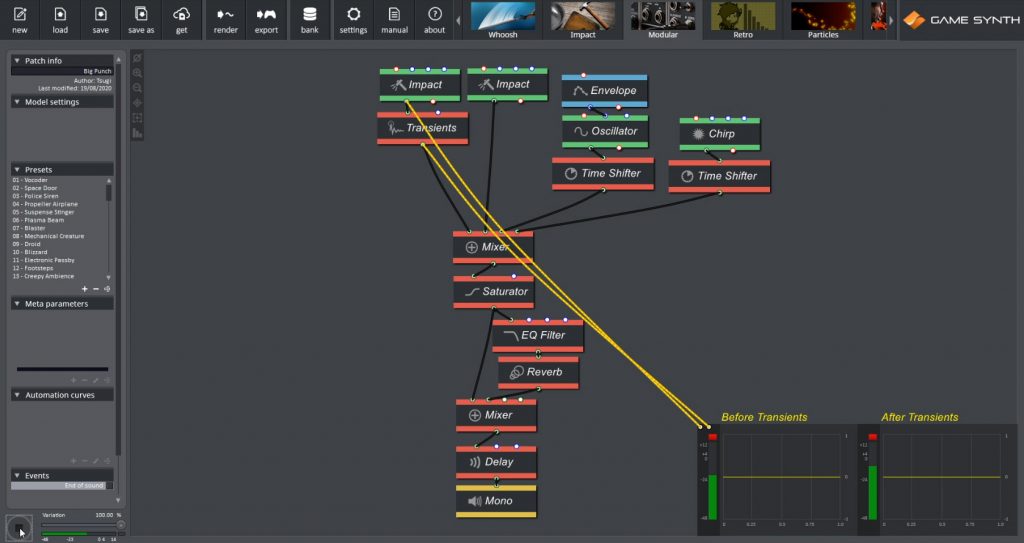