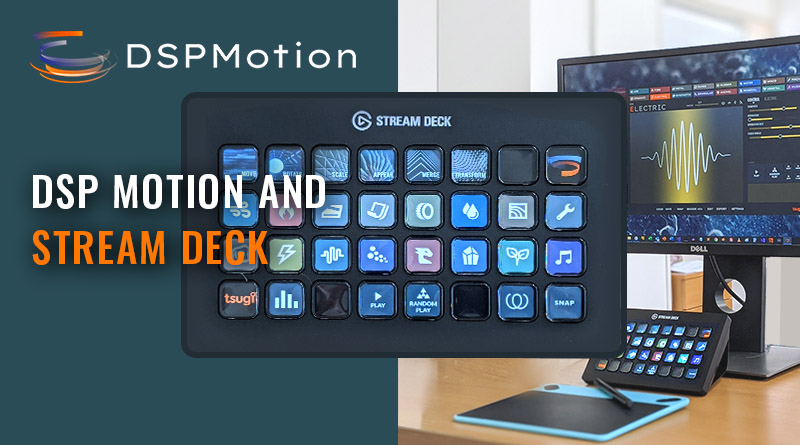 In this post, we will see how to control DSP Motion from an Elgato Stream Deck. As implied by its name, the Stream Deck was initially designed for streamers, to quickly produce content and easily interact with viewers. However, with great LCD buttons and a powerful configuration app, it simply is a great productivity system that can be used for many other tasks.

Because DSP Motion lets you draw sounds very easily, many of its users are video makers and more generally content creators who may already own a Stream Deck. The layout we present here is for the Stream Deck XL but, if you have another model, check the bottom of the page where you can download all the icons and create your own layout. 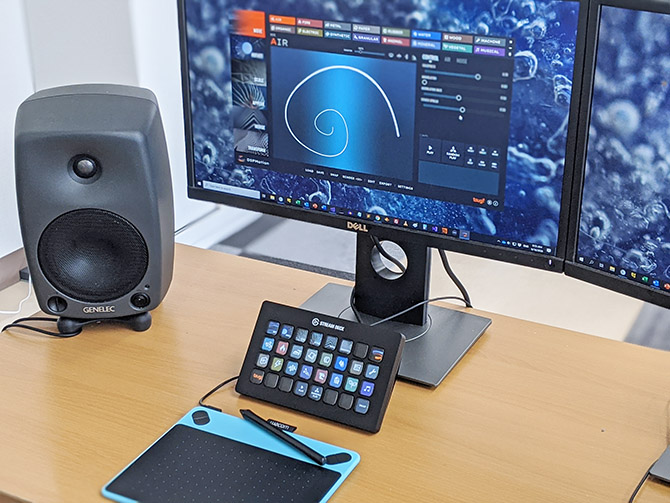 The first row of buttons allows for the selection of one of the 6 types of motions available in DSP Motion (move, rotate, scale, appear, merge and transform). They are simply assigned to the keyboard shortcuts of DSP Motion, like most of buttons in this layout. 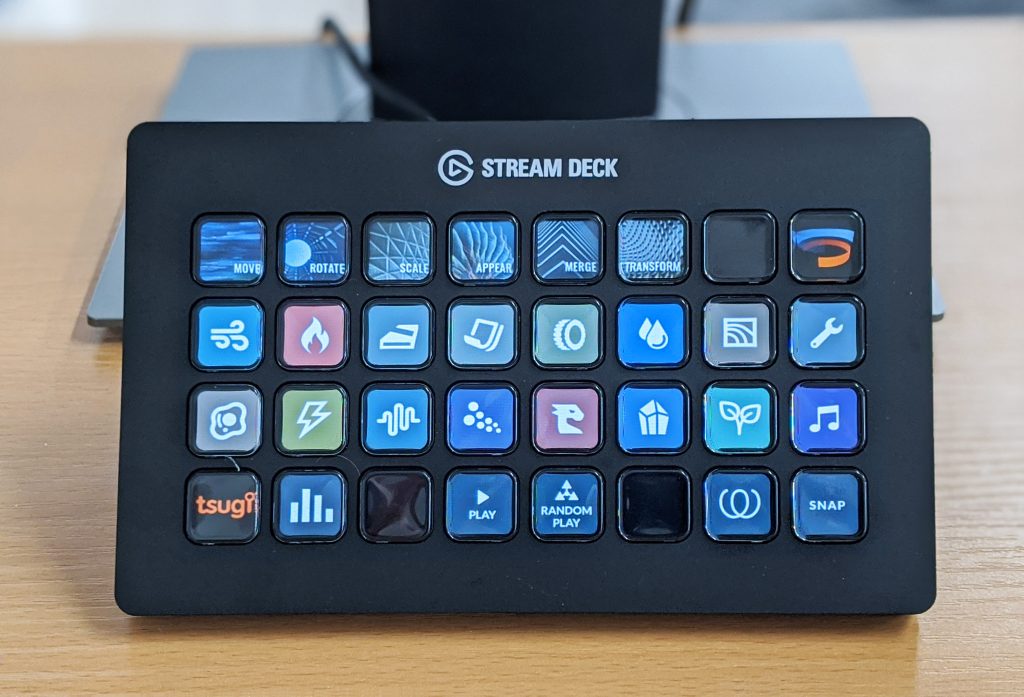 The next two rows are used to choose the audio shader (e.g. water, paper, synthetic…). Luckily for us, these shaders are organized in 2 rows of 8 buttons in DSP Motion, so we can mimic this layout perfectly on the Stream Deck XL. Each audio shader in DSP Motion also already has its own icon, which is very handy to design the buttons!

The last row of the layout is dedicated to the main commands. We chose to add Play and Random Play as they are the most important, as well as Snap. This function saves the latest sound generated as a WAV file (in a folder of your choice, with a date and an index). This means than with this layout and a tablet, it becomes possible to draw your sounds and save them very quickly, without ever needing a keyboard. 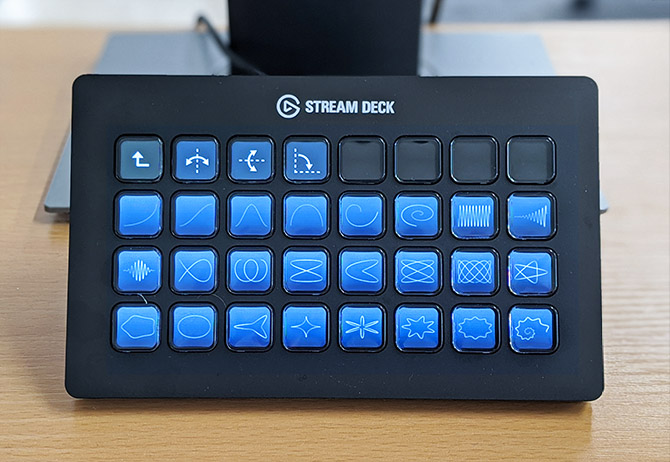 In addition to the main commands, the last row also hosts the visualizer button (allowing you to cycle through the various audio displays), and the curve button. This last one opens a secondary layout dedicated to the sketch pad drawing. It contains buttons to rotate and flip the curve, as well as 24 curve presets. These preset buttons simply open the preset window in DSP Motion and select the corresponding preset by triggering a few keystrokes.

Finally, you will notice that there are also DSP Motion and Tsugi buttons in our layout. By pushing them, you can go on the web page of DSP Motion (for example to check for updates) or on the homepage of the Tsugi’s web site.

Although this configuration is for the Stream Deck XL, if you have another model of Stream Deck, want to design a new layout, or add different functions, we have prepared a package containing all the icons you may need! Refer to the DSP Motion documentation to see all the shortcuts available and assign them to your deck’s buttons. Most functions have their own key shortcut, so you can really control the whole tool! 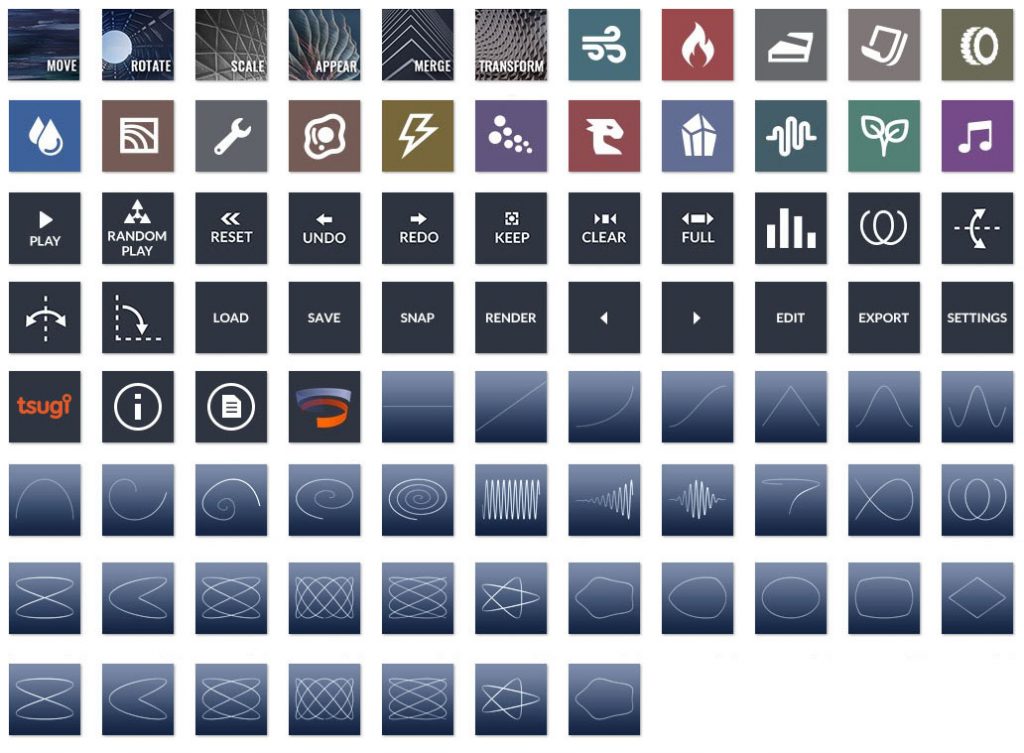 Final tip: you can also make good use of some 3rd-party Stream Deck plug-ins. For example, we added the Audio Meter from https://barraider.com/ to this layout, to visualize the output level of DSP Motion directly on the Stream Deck!