The sound of hinges and floorboards creaking in media is often tied to a visible, interactive event (such as opening a door). This interaction makes syncing to picture tricky if we don’t have the right texture and sound duration. Fortunately, we can use GameSynth to create a procedural system to generate our sounds, meaning that we don’t need to find the perfect real-world analog. 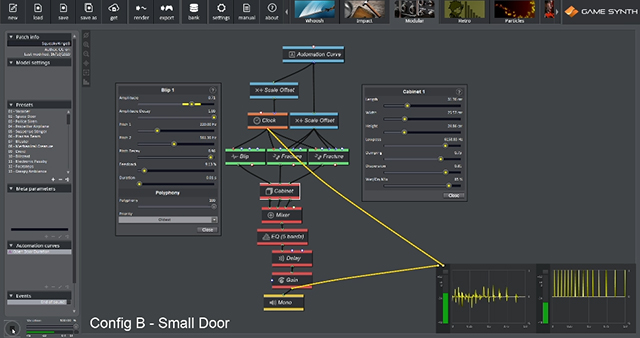 This patch uses two Fracture modules and a Blip to generate our slip-stick clicks. The Fracture modules produce the frictional body, and the Blip adds color and character. Each Fracture instance is set up slightly differently to produce a more robust sound, with Material and Size being the primary means of customization. “Hardwood” and “Softwood” Materials can be used to impart a thump, whereas “Rubber” and “Natural Fibers” work better for adding snap. The Size slider can then be used to adjust the overall tone of each. 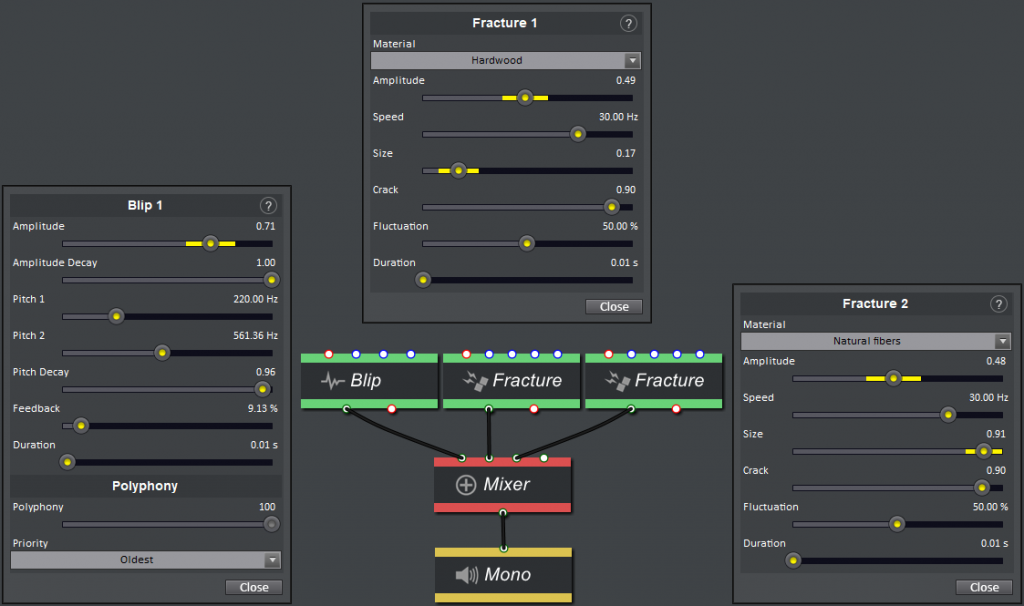 Blip has many more features and allows for even more creativity. The Duration can be set as low as 0.01, and higher Pitch and Amplitude Decays tend to work better, but all of the other settings can be used to shape the sound freely. Since there are two Pitch sliders, a wide variety of tones can be achieved by only adjusting these. The Feedback slider can further yield interesting results depending on the pitches set. In some cases, it can produce an almost watery effect.

Once we have generated our source material, we are sending it to resonate through a Cabinet module. This module allows us to define our resonant body’s dimensions and damping, giving our sound weight and realism. Feeding a different generator into each input leads to some interesting interactions within the Cabinet, which is later balanced via the Mixer. Some EQ and Delay add a final touch of spatial dimension and polish.

Control for this patch is straight-forward, using one lead Automation Curve to control the whole patch. A Scale Offset module scales this curve to control a Clock module’s frequency, which triggers click playback. A second Scale Offset Module adapts this curve again, but to a smaller range and higher up, to add some subtle pitch and speed modulation to the source generators.

By swapping out the Automation Curve with different shapes, we can mimic the control envelope of different interactions. We could even use a Meta Parameter with custom curve shapes to create a more performable patch or use the Derivatives module to create a patch which responds to velocity.