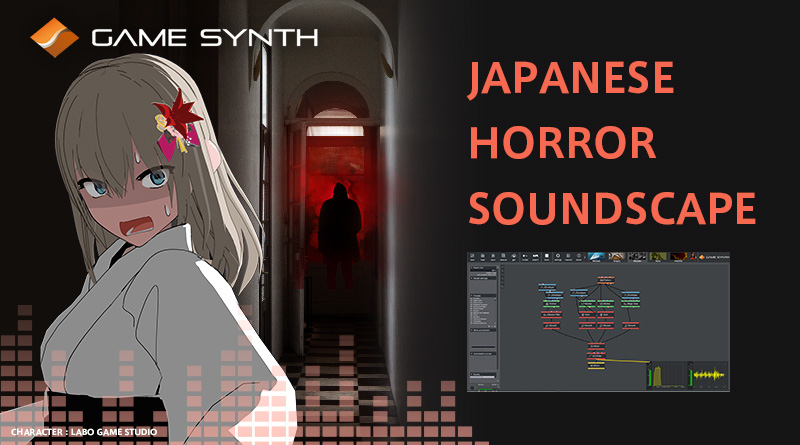 Horror is a popular genre of games, especially here in Japan. This is the type of games I develop, mainly using RPG Maker. It is relatively easy to create, even as an independent developer, as the main goal – scaring the player – can be achieved without high-end production. To induce fear, we can rely on the story and visuals, but also on audio, by playing disturbing sounds and ambiences.

The modular patching system in GameSynth allows for the creation of creepy soundscapes, with both tonal and noisy elements. Without having to dive into DTM or to read sheet music, indie developers can create elaborate horror soundtracks, which can be tailored to their game, unlike free music material downloaded from the web.

In typical Japanese horror movies, a gradually creepy music or ambience will often play before something terrible happening, like a creature appearing etc.
It is usually composed of one or more of the following elements:

I tried to reproduce this feeling in a modular patch in GameSynth. Here are some of the important modules I used:

The full patch combining all the elements can be seen below. You can click on the Download button at the bottom of this page to get the patch and experiment with it.

Here are a couple of other ideas to explore when using the GameSynth Modular model to generate creepy ambiences.

The Modular model has a very handy feature that will instantly create a random patch (available either from the context menu or by pressing “Ctrl + P“). The patches created this way are always structurally correct and will always generate a sound.

However, since they are randomly generated, many of the resulting sound effects are abstract and not well defined. It is hard to say what they represent exactly… Such strange and unique sounds are fantastic material to create destabilizing sounds in horror projects.
I often use the random patch creator and, when I find something intriguing, I save it as a preset to use it as a seed for more patches later. 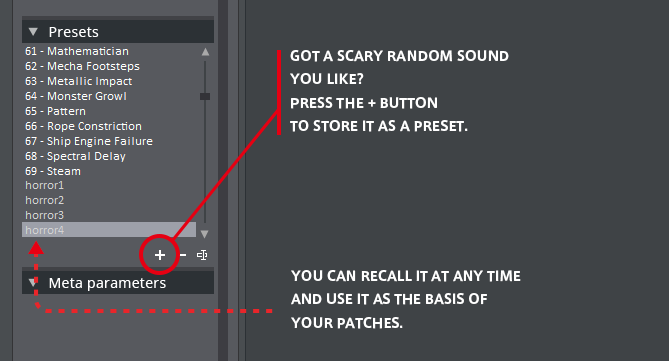 If you download the patch at the bottom, you will notice that I assigned some random ranges to the parameters, and also applied random selection to some of the checkboxes (the ranges and marks appear in yellow). By doing this, each time the sound is triggered, the parameters of the patch are randomly determined, and the horror ambience changes slightly…
Automatic generation of sound variations is something unique to procedural audio and it is a great feature when creating various ambiences or layers.

The way a sound slowly moves from one side of the audio field to the other, or accelerates, can be very evocative as well. If you are not using positional audio in your game for your source, try to craft your sound to take advantage of stereo (add a Stereo Output module to your patch first).
In this last example, I created a sense of emergency – like during a time-sensitive mission or a boss battle. The feeling is accentuated by the ping-pong effect of the impact sound, which is jumping between the left and right channels.