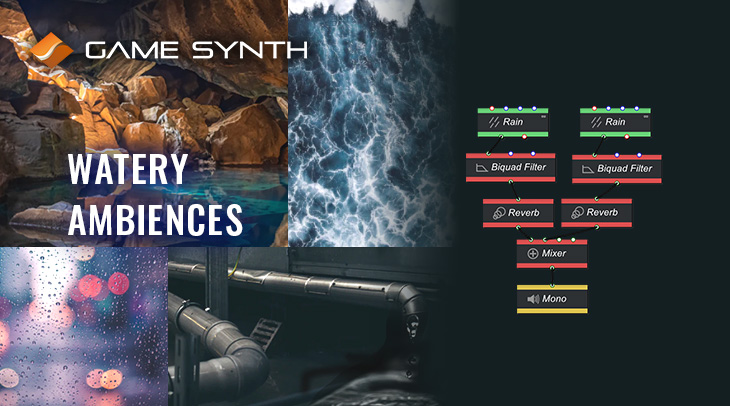 In this post, we will examine creating some watery ambiences with a collection of wet modular patches. Of course, GameSynth has a dedicated Weather model for easily customizing traditional ambience types. However, the Modular model allows for a much deeper level of control and offers additional generators and effects processors to sweeten the result.

In this example, four Rain generators are being used to create the different characteristics of rainfall. The volume of each is represented in the Meta Parameters tab as Close Shower, Far Shower, Heavy Drips, and Light Drips. Separating the generators in this way allows us to quickly dial in the perfect mix via the Gain modules.

Each generator’s density is also being controlled; however, they have been separated into two groups. The two on the left create the blanketed noisy rain aspect, and the two on the right create the distinct pitter-patter of individual droplets. The Meta Parameters Shower Density and Drips Rate represent both of these, respectively.

Finally, an EQ Filter is applied at the end as an adjustable low-pass filter. Lower values of this slider create the effect of being inside, as the high-frequency content is attenuated.

Our second patch is perceptually quite simple. Two Rain generators are outputting only the distinct drips, with a Biquad filter and a Reverb effect used to create a sense of space and control the apparent depth. By setting the material type to Lake, using heavy reverb settings, and setting a low drip rate, we can develop a convincing cave drip ambience.

This time we are using a mix of Rain and Wind as our source generators. These modules create a complex, noisy signal, which is then modulated by some looping Automation Curves. A Lerp module chooses a value between these two curves and sets them based on the Waves Height Meta Parameter.

The Pitch Meta Parameter is actually controlling the center frequency for the EQ Filter‘s bell curve. Since the signal is quite noisy, this has the effect of altering the perceived pitch as it creates a resonant peak. It also mimics the effervescent gush of the ocean’s surf.
And like with the Waves Height Meta Parameter, we have a Lerp module choosing between two automation shapes, this time controlling the apparent distance from the sound source.

As with our cave drips, we have another patch that is easily understood at a glance. A Rain generator is used to output drip sounds, and a Comb Filter and Tube processor shape the result. The combination of aggressive filtering and resonant shaping by these two effects modules convincingly creates the effect of a drain or water pipe. A Meta Parameter then offers the ability to perform the amount of water pouring down the drain in real-time.