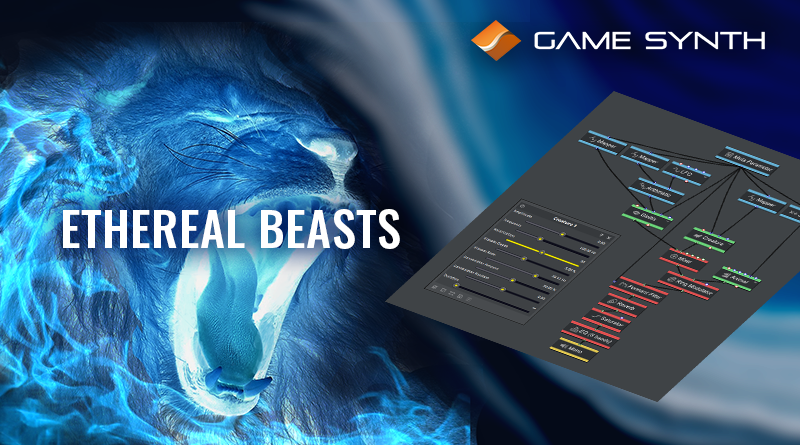 GameSynth offers a nifty collection of modules for creating all sorts of vocal sounds. In this patch, we will showcase how to craft the wails and roars of ethereal wraiths and mythical beasts.

Glottis produces a throaty harmonic squabble that requires a fair amount of modulation. Creature offers a more immediately usable vocal wail that leans into vibrato for defining its character. And the Animal module is similar to Glottis but is more focused on noise shaping. Although each module has a wealth of internal settings to tweak, we can hear the most significant changes by switching the Animals dropdown in the Animal module. Bat, Tiger, and Lion work particularly well in this patch.

The entire patch is controlled via a single Meta Parameter titled “Vox”, and thus we need to make liberal use of Mappers. For the Glottis, it can help to use a non-linear curve to create a natural vocal curve. And since the Glottis is ring-modulated by the Animal module, this curve will have a knock-on effect throughout the whole project.

The Pitch of the Glottis is being modulated directly by Vox, as well as by an LFO. The LFO adds jitter to the signal, and changing its amplitude can produce interesting tonal changes.

Mapper and Scale Offset modules are used for the other generators to reduce the range of modulation shifts. Since the Mapper is mapping to a linear curve, the outcome is effectively the same as the Scale Offset. The use of both is simply to demonstrate different valid approaches.

The Ring Modulator is the central processor that ties the whole patch together. By summing various modules together and modulating them with a rich source, we can create a new source that is more tonally complex than any single part.

The Formant Filter then simulates the filtering performed by a vocal tract. This filter, together with the Reverb, glues everything together and softens the high-frequencies. However, since the attenuation can be a little too severe, we can use a Saturator and EQ to tune the perfect amount back in.

Like always, this patch will be added to the GameSynth repository. In the meantine, you can download it below.