If you have ever experienced a car rushing by you, you will already have a good idea of what Doppler is. If you are unfamiliar with the word, Doppler refers to the perceived pitch change as an object rushes by a listener. The sound will appear to pitch up as it gets near and pitch down as it drifts away.

The Doppler module of GameSynth’s patching environment allows us to mimic this effect by setting the sound source’s distance and velocity. This effect is quite unique in that it is a one-shot effect, and it can be reset via its trigger input. Once the effect has pitched and faded out, it won’t automatically start by itself.

The simplest use-case for this effect is the most obvious – creating a car driving by. Since we have designed a highly-customizable engine sound in a different blog, we have used that as our source thanks to the Patch Player module. Next, we use Doppler to quickly create our pitch shift effect. To sell the effect further, we have created Gain and Panner effects modulated via a couple of Envelopes. By matching all our effects together, the final patch is light-weight but very convincing! 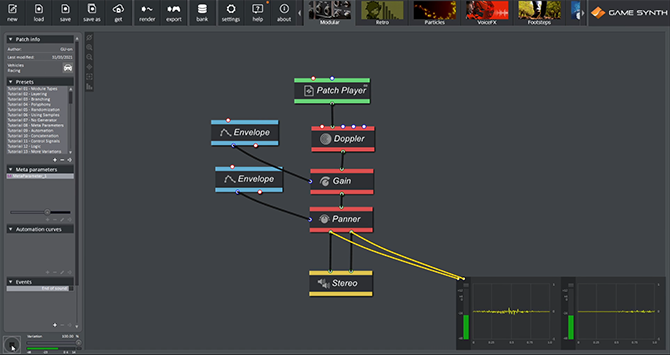 In a previous blog, we showcased a procedural debris generator that synthesized up some satisfying gravelly textures. We revisited that patch, swapped out the Impact module for some Bullet Casings, and added a Doppler effect to the chain. Since certain cartridge types produce pitched tonal clattering, the pitch shifting is distinct and characterful.

Although the Doppler in this patch isn’t explicitly used to mimic motion, it is still a neat effect for creative sound design purposes. 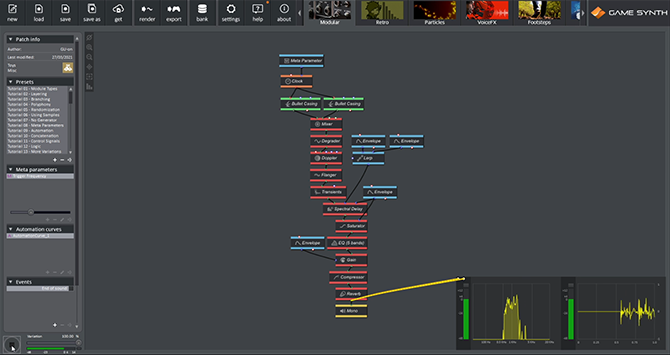 In this patch, we use Doppler to imply motion, but not of a fast object rushing by. Instead, we can use it to create the froth of a wave’s surf.

The Hail and Fracture sources give the sound its distinct textural character, and the Goo and Granular Noise sources give the sound its frothiness. The Hail is first Ring Modulated by a Random signal shape (aka noise) to help soften it. All of the sources are then mixed and Doppler-shifted to give it that distinct pitch sweep effect. By keeping all the generators on infinite Duration, we can use the Clock to retrigger the effect for a rhythmic pattern that matches a tidal ebb and flow.

Saturator and Chorus modules help to bring out the high end and thicken the overall sound. Since the Doppler shifting can lead to excessive bass, using a Biquad around 40Hz prevents too sub-frequency build-up. Then a touch of EQ is used to accentuate the high-end even more for the perfect mix. 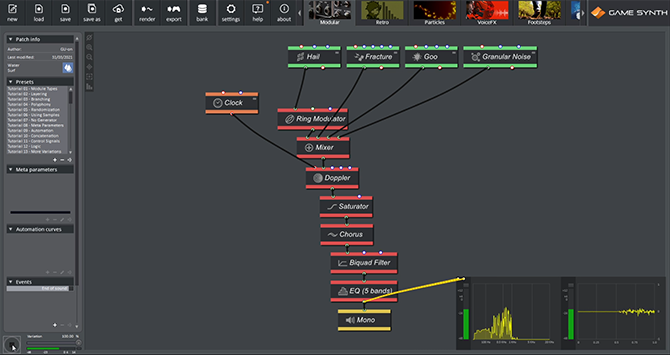 In our previous blog, we recreated a typical Japanese anime swish sound by drawing its movements in the Sketch Pad module.

Below is another implementation of this sound effect, which after creating the initial metallic timbre with Gear and Clang generators sent through Spectral Delays, uses a Doppler module to add movement to the sound.

The sound is then made low-fi with a Saturator and a Degrader, before going through a Delay and an EQ (5 bands). 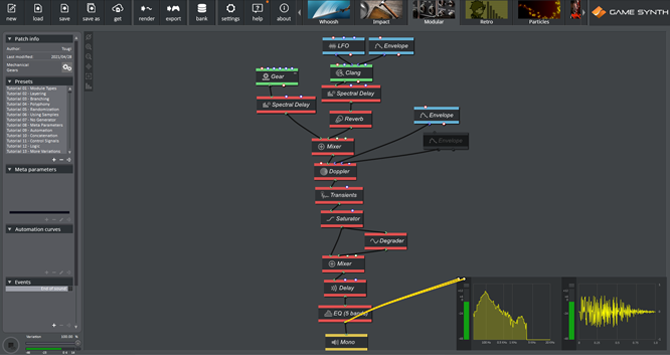