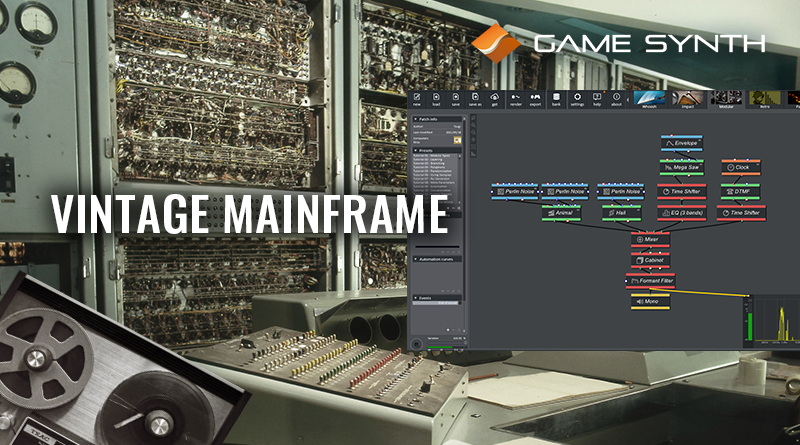 In this post we design the sound of a vintage mainframe computer in GameSynth’s patching environment. Think about a huge machine, hidden in an underground complex during the cold war, calculating all the possible outcomes of a potential nuclear conflict. Certainly scary, but also a perfect sound effect for your wargames! 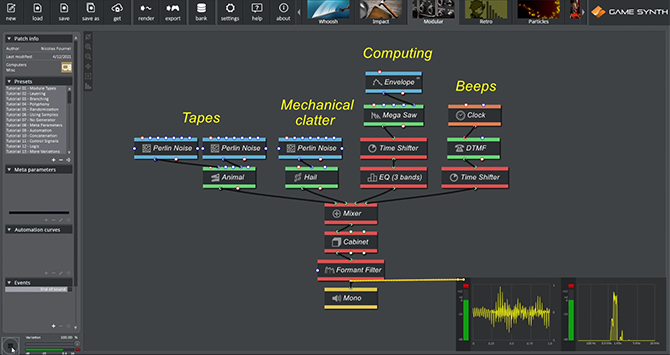 Our patch combines 4 different types of sounds (tapes, mechanical clatter, computing, and beeps), and some of the modules used to synthesize them may surprise you! But it is part of the appeal of modular patching: the sum is always greater than the parts!

Before SSD hard drives and before floppy disks, computer data was stored on magnetic tapes. To recreate the sound of these tapes, we use an Animal module, modulated by two Perlin Noise modules that make its amplitude and pitch randomly evolve over time.

The Animal module may seem like a surprising choice, but it simulates the slightly whining sound of the rolling tapes surprisingly well. We selected the algorithm for a bat, but by changing the type of animal we can synthesize various types of sounds, from smaller / faster tapes (e.g., bird, bat) to larger / slower tapes (e.g., lion, tiger). The wolf gives some very interesting results too, try it! 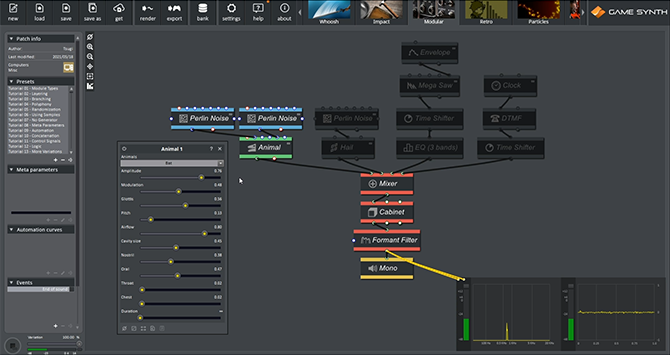 The second branch of the patch generates the sound of mechanical clatter, coming for example from the opening and closing of electromechanical relays. The Hail module may look like another odd choice, but it gives us exactly the event distribution we are after, and offers a very similar, noisy timbre. Once filtered by the patch’s processing stage, and mixed with the other generators, it will sound exactly the part! 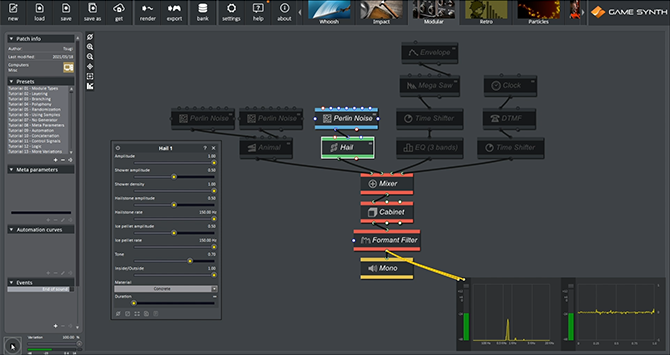 The third sound source simulates the computer’s processing by adding a pulsating, electric-sounding tone. The generator used is a Mega Saw oscillator, whose Mix parameter is modulated by a looping Envelope. This creates a harsh and at times resonant sound. To avoid triggering all the sound sources simultaneously when starting the patch, a slight delay is added by a Time Shifter module. 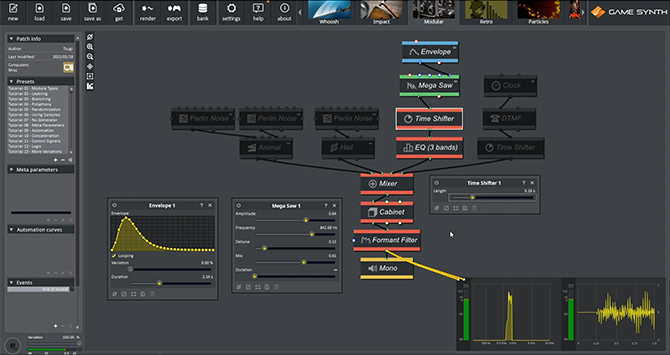 The last sound source is a DTMF module that outputs a series of 3 characteristic beeps, representing results or maybe calculation errors. The frequency at which the series of beeps are repeated is set via a Clock module, with a rather large value for its Variation parameter, in order to avoid any recognizable cycle. Here again, a Time Shifter is used to spread the different sound components over time.

Finally, the 4 sound sources are mixed and sent through the processing stage of the patch, constituted from Cabinet and Formant Filter modules. The goal here is to make the sound less harsh and more like it originates from behind a glass panel, inside a computer cabinet, or a computer room.

If this patch taught us something, it is that we should focus on the sound we are trying to create, rather than on the name of the modules!

The patch has recently been added to the GameSynth repository under the name ‘Vintage Mainframe’. You can access it directly from the tool and modify it as you wish. You can also search for ‘Computer’ in the repository for similar patches!