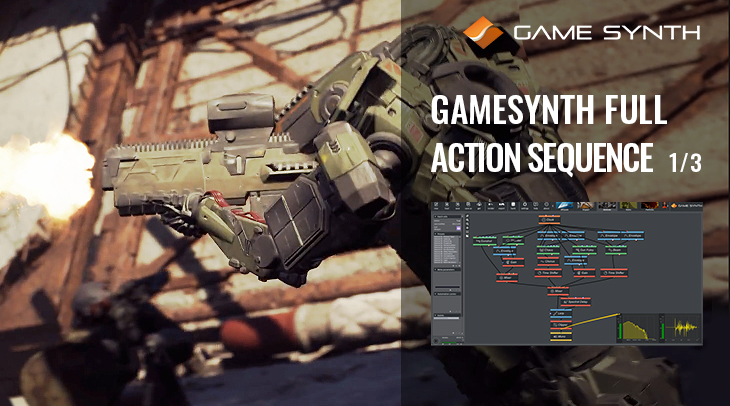 As a procedural sound design tool, GameSynth makes it possible to generate any real or imaginary sounds by synthesizing them, without using any samples (although you could also import some if you wanted).

In this 3-part series, we will learn how to design the sounds of a full action sequence, complete with gunfights, explosions and robots! Here is the final video, using 100% synthesis and not a single sample. All the patches are available for download below. 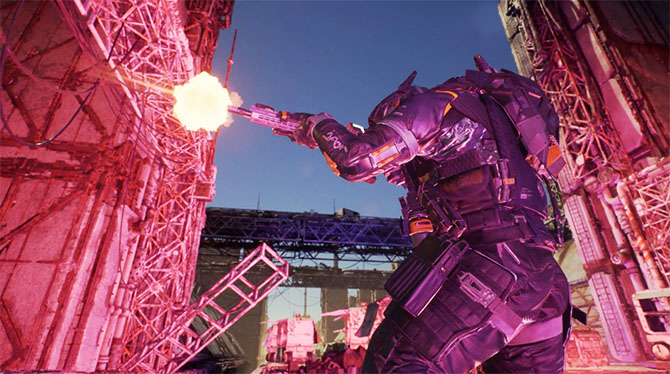 Let’s get right into it! The first sequence shows a robot running and shooting on an urban battlefield. The footsteps sound effects are based on the repository’s Robot Footsteps patch. Since this patch is better suited for larger robots, we lowered the value of the Impact parameter on the Clang module and, in the Mixer, we decreased the gain corresponding to the sub-sine generated by the Oscillator module. 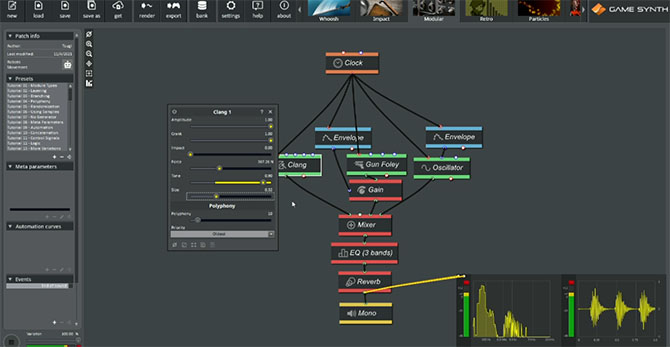 The legs movements consist of two layers. The Machine module is used as the main generator for the first one. This module is always very useful when creating servo and motor noises. By modulating the Throttle with an Envelope, convincing mechanical movements can be simulated. The Clock module is used to trigger the sound at regular intervals, although a small Variation set in the Envelope allows for a slight randomization of the timing.

The second layer is a lighter and more hi-tech servo sound. A Blip module is sent through a Ring Modulator. Instead of relying on its internal oscillator, we use the Mega Saw to get a softer sound. The Rectifier module adds some noise with the same effect. 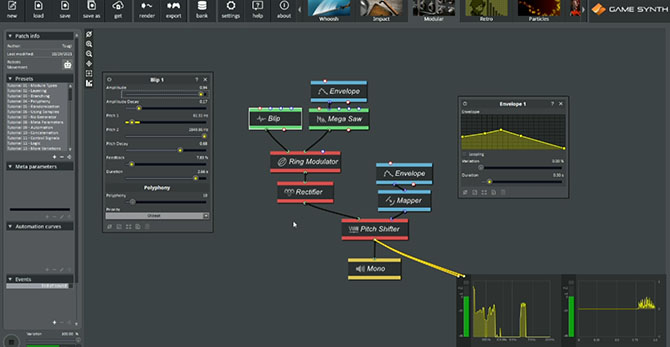 The robot’s rifle looks hi-tech. So, while the gunshot should sound big, we also want to add a sci-fi layer to it, which will make this patch a bit more complex. Our first focus is on the explosive part of the gunshot: a powerful blast is created by combining Gunshot and Thunder modules. We then use the Reload Rifle mode of the Gun Foley module to give a more realistic feeling to the sound by adding some mechanical parts.

As for the sci-fi layer, we start by using the Beam module to create a punchy laser sound. This effect is easily created by modulating the pitch with a fast downward Envelope. The Width and Slope parameters can then be adjusted to achieve different sounds. Finally, a Chaos module going through a Chorus adds a more organic touch to the sound. The Time Shifter module ensures that the layers don’t totally overlap and mask each other. 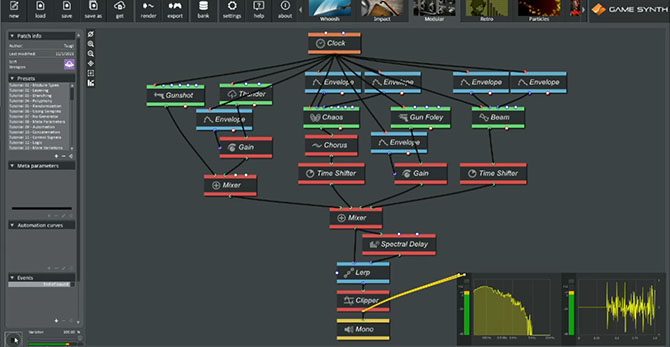 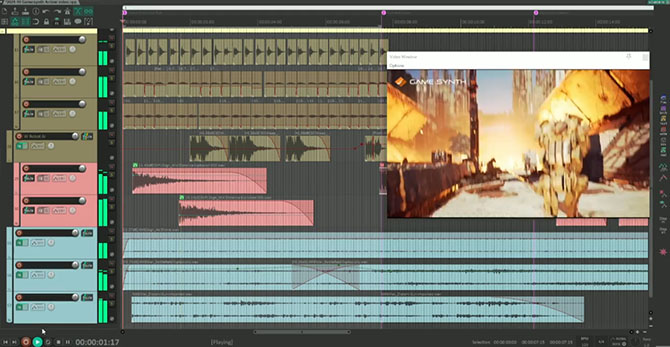 The next sequence starts with an explosion, whose initial impact is built by combining Chirp and Blip modules. The whoosh layer is supplied by a Fire module, and a Thunder module is again used for the tail of the explosion. (Note that this patch was also used for the distant explosions at the beginning of the previous sequence.) 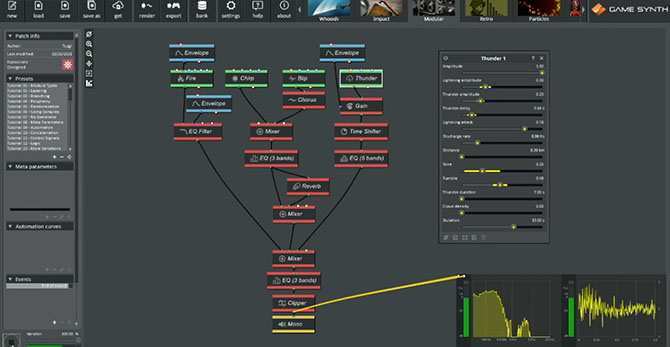 The footsteps of the running soldier are straightforward to design in the Footsteps model of GameSynth. After having selected Run for the Movement, Boots for type of shoes and Concrete for the Surface, it is very intuitive to simply draw on the sketch pad, essentially walking to generate the footsteps! The sound was fine-tuned by adjusting the Speed and Detune parameters as well as the EQ curve.

We created other layers in the Footsteps model, for example using the Sand surface to add a smoother sound. We also used the Jump movement just before the soldier slides and set the Scuff parameter when he tries to get back on his feet. An additional gritty layer was generated in the Impact model. The Impact Noise section of the model is indeed great to create impacts that sound more like gravel or snow. 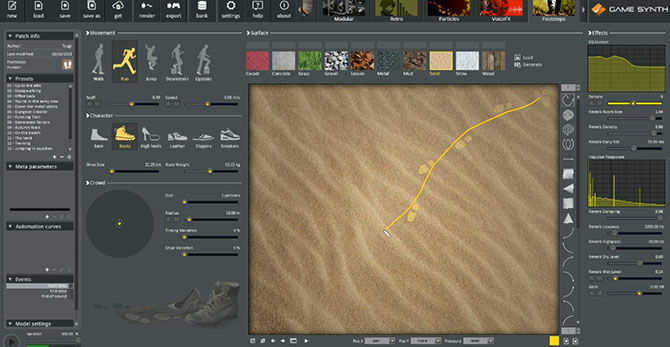 For the slide itself, we went back to the Modular model. Combining Granular Noise and Rocks modules allows for the creation of a nice gritty movement. A Footsteps module with the Leaves surface is also used to soften the sound.  The sound of the dust trail is generated by using the Whoosh model, with a high frequency, low bandwidth deflector, and the EQ set up to emphasize the high-frequency content. Using the sketch pad, it is really easy to simulate the movement by following the action on screen. 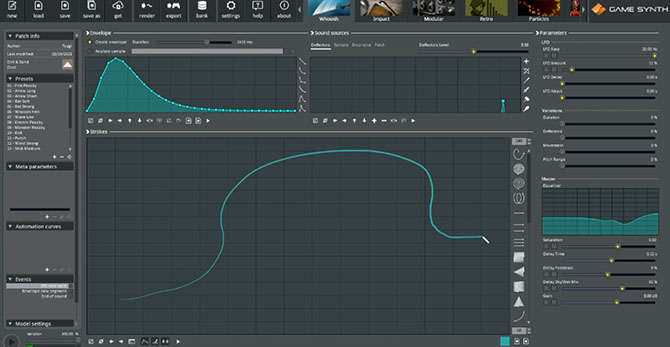 Finally, we created a patch to generate clothes sounds, once again in the Modular model. The Noise Bands module is especially well suited for this. Some modulated filtering was used to create a sense of motion, and a final Comb Filter adds some resonances. 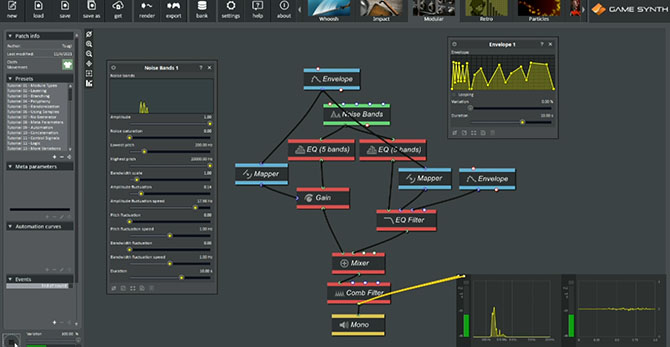 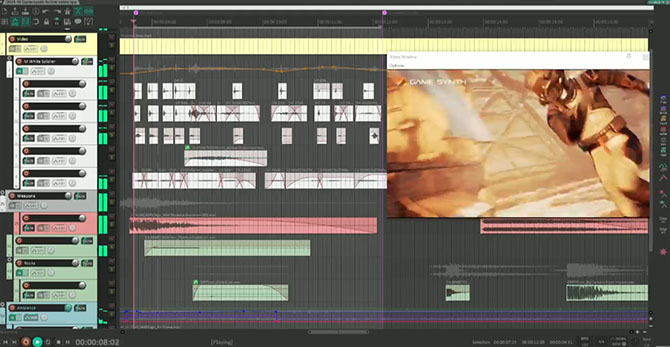 A multi-layered warfare ambience patch plays in the background during the whole video. First, a low and quiet “air tone” has been generated in the Modular model. It consists of a simple Noise module, connected to a Biquad Filter configured as a Lowpass, and sent to two slightly different Reverb modules to create a subtle stereo effect. To make it vary slightly over time, a Perlin Noise module that generates a pseudo-random signal modulates the Cutoff of the Biquad Filter. An extra Mapper is used to constrain the amplitude of the variations of the modulating signal. 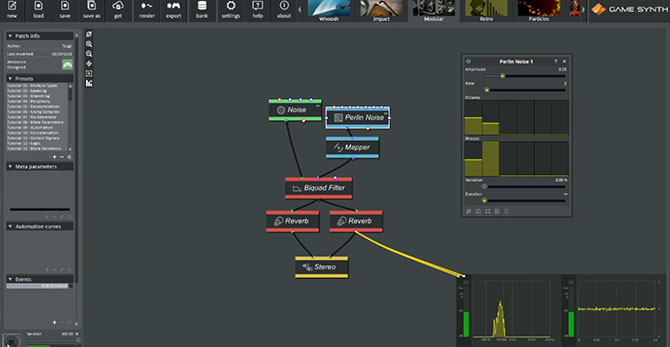 To add some distant explosions and gunshots to the ambience, a second patch including a Gunshot module and a Thunder module has been created. As you may have noticed by now, the Thunder module is also very well suited to create explosive sounds! The role of the following EQ Filter and Spectral Delay modules is to create a more distant sound.

Now let’s introduce a very useful technique. In GameSynth, you can assign random ranges to the parameters and then automatically generate a large number of sound variations from a single patch. Here, we rendered a dozen a wave files that all sound slightly differently. Once these wave files are imported in the Particles model, we can draw on the sketch pad to instantly simulate a distant warfare ambience with scattered explosions. The various sounds are triggered while we are drawing, and modified based on the movements of the mouse, essentially allowing us to perform granular synthesis in a very intuitive way. 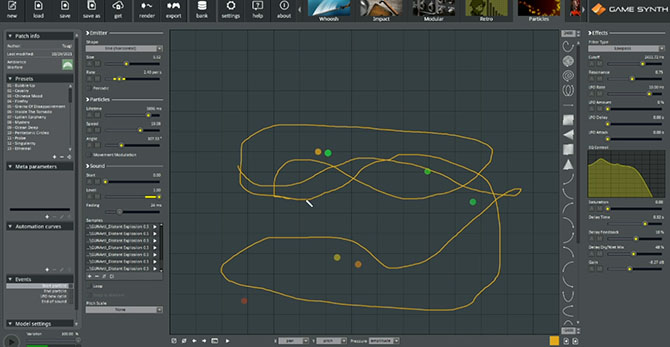 We replicate this technique for another type of gunshot, a bit less powerful than the first one. This time, we get the Shotgun patch from the GameSynth repository and delete the right branch of the patch (the one with all the Gun Foley and Bullets modules), to only keep the gunshot itself. Then, just before the Clipper module, we add an extra EQ Filter set up as a Lowpass to simulate a more distant sound. The patch repository of GameSynth is a really useful resource to find interesting patches that we can then modify to our liking. After assigning some random ranges, we export a few variations and draw a new ambience layer in the Particles model. 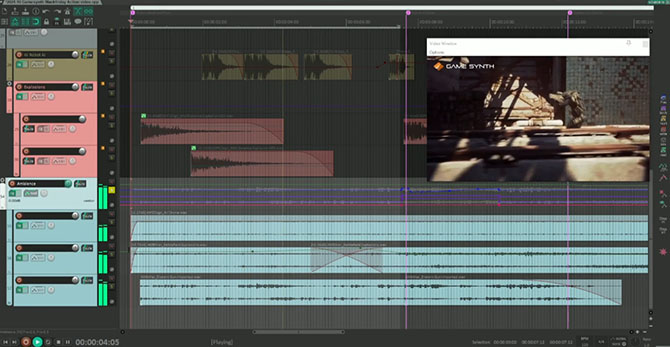 With this last layer, the warfare ambience is now complete and this concludes the first part of our series on designing the sound of a full action sequence in GameSynth! Avoiding the whole recording-sourcing / cleaning / editing / processing / tagging and cataloging process that comes with using samples definitely has some benefits, especially in terms of workflow, turnaround time, and creating sounds that are perfect matches for your project. In the second part, we will continue our foray in sound effects synthesis and design more gun shots, bullets, explosions and machines in GameSynth!