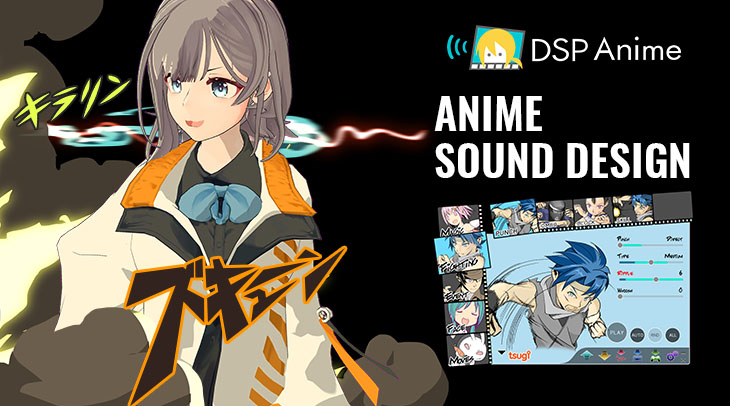 Cel animation is the traditional, hand-drawn animation technique that involves drawing and painting objects on celluloid (cel) and that is used to create cartoons and Japanese anime. However, with the help of advanced toon shaders and new, intuitive animation features, it is now possible to produce similar animations with a 3D package. Moreover, many characters such as Unity-chan and other virtual YouTubers are now readily available – especially in Japan -, making it even easier to get started. But how to create sound effects that match these animations?

DSP Anime is a sound effects generator focusing on Japanese anime and cel-animation in general. It offers many categories of sounds (for characters, locations, objects…), each of them with parameters that you can adjust to fit your project. For example, we used DSP Anime to add sound effects to the character animation below, which was first created in Unity, with some visual effects later added in After Effects.

In search of the perfect sound

Getting the exact sounds needed for an animation sequence is usually a time-consuming and costly affair. At the professional level, it involves recording multiple takes either on location or in a Foley pit. If characters are involved, voice actors must be recorded. Then comes the time to clean all these recordings, edit them, and tag them for inclusion in a sound database. If similar sounds were already in the database, they can be used instead. However, applying time-stretching and other processing to make them match a specific animation will likely be required.

For non-professionals, scouring the net in search of sound materials takes time and is not guaranteed to turn up any samples that fit the situation, are of sufficient quality, and match the very specific audio style of Anime.

The merit of DSP Anime – and the DSP Series in general – is to provide high-quality sounds (as they are synthesized, there is no background noise and they use the full dynamic range), that are already in the right style (in this case, Anime), and that you can tailor to your exact needs, simply by adjusting a few parameters with evocative names.

In the video below, we adjust the sound parameters to match our sequence while watching the animation. 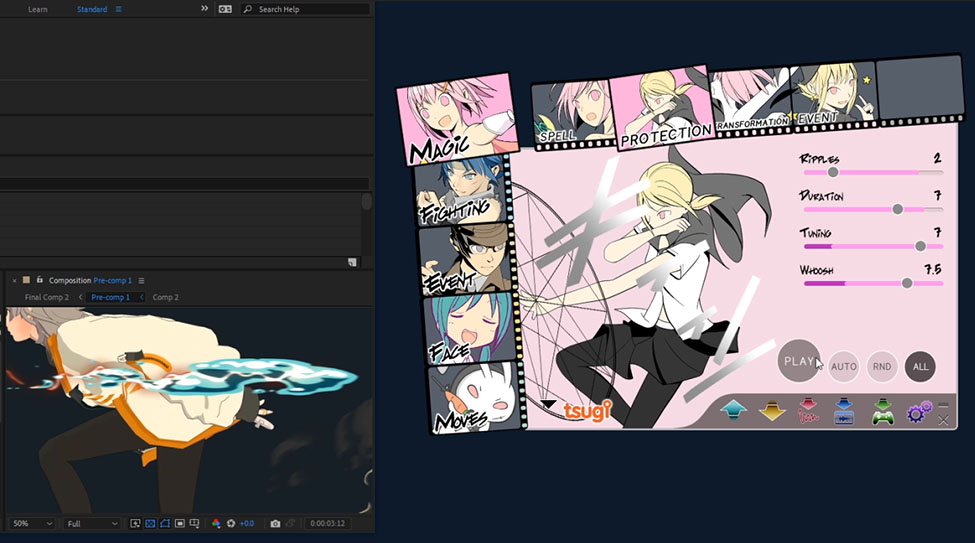 DSP Anime is straightforward to use, with no knowledge of audio jargon required. Simply select a Category of sounds (e.g., Fighting) , then a Type of sound (e.g., Punch), and adjust the parameters to your liking!

The previous video shows how the sound effects for the character movements were created, using the Dodge patch of the Moves category. Plenty of other whooshes and movement sounds can be generated in this category.

For the magical effects, we used the Protection and Spell sounds of the Magic category. Instead of manually adjusting the sliders, this time we assigned random ranges to the parameters and used the Random Play function of DSP Anime to generate sound variations until we found one that worked for well for the animation. The random play mode makes sound design even easier and faster! We used it as well for the final blinking eye sound effect.

In addition to these sounds, we also generated footsteps and fighting sounds with DSP Anime, from the Fight and Foley categories respectively. All the sounds were saved as WAVE files and imported into a video editing tool, where the timings were adjusted. You can see the final audio layers below. 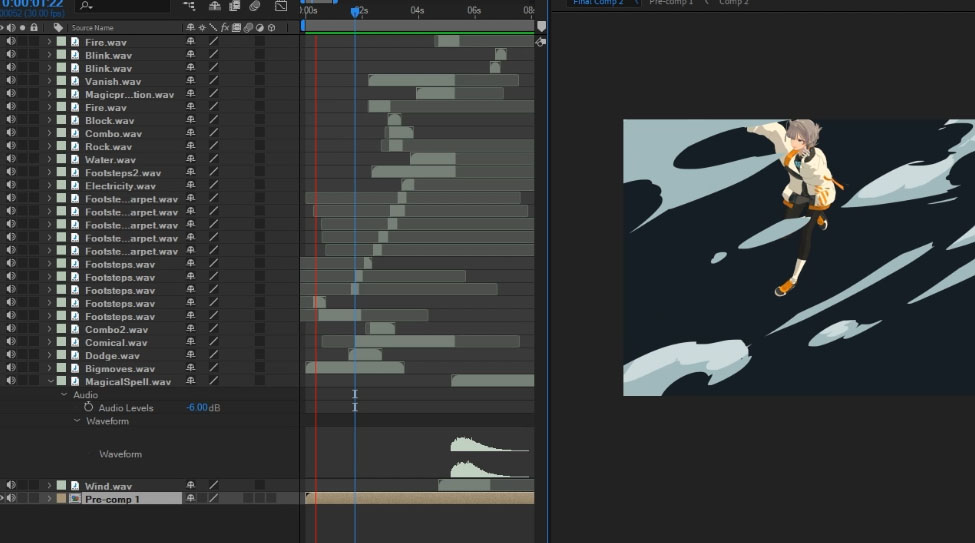 DSP Anime includes a wide range of sound categories, such as Magic, Fighting, Events, Emotions, Pets, Locations, Elements and Foley that will cover any situation specific to anime. For example, the Locations category offers places that well look familiar to anime fans, such as a classroom, an office, a park, a ramen restaurant, or a train station. There is even a slider to adjust the rate of the slurping sound in the ramen restaurant!

The sounds generated have a definite anime flavor to them, which suits cel animation perfectly. Using realistic recordings in this case would sound out of character!

The WAVE files saved by DSP Anime can be used in any free or commercial creative project. There are no extra fee or royalties. Don’t hesitate to let us know how you are using them, as we would love to watch your animations!