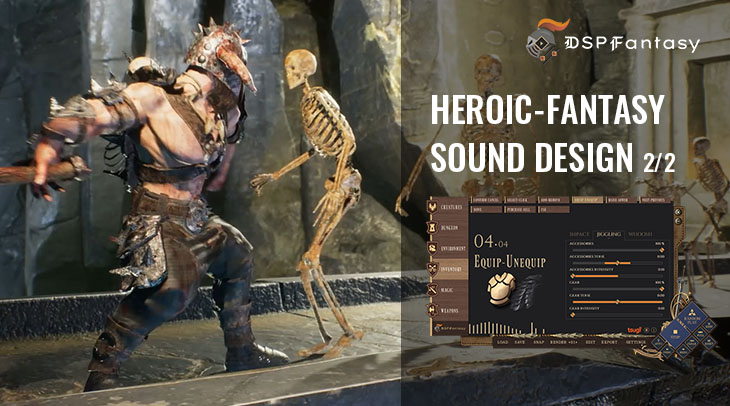 After using DSP Fantasy to design a dungeon ambience and cast magic spells in the first part of this post, it’s time to get our battle axe and fight some skeletons, while a dragon is ominously waiting for us. But let’s check the full animation first. 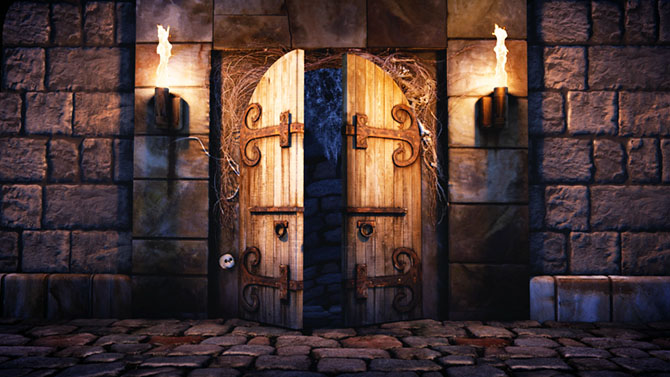 Warrior on a bridge

The third sequence of our animation shows a ferocious warrior making his way on a bridge while fighting a horde a skeletons. To create their voices, we layered both the Skeleton and Goblin patches from the Creatures category. The Skeleton layer provides the breathy part while the Goblin layers adds a growly component. Several variations for each of them were randomly generated and we simply selected the best pair for the two closest skeletons.

The Footsteps patch of the Dungeon category, with the Surface set to Gravel does a good job at simulating bone footsteps. The impact sounds – triggered when the skeletons are hit by the warrior’s axe and fall on the ground – are generated by layering the Equip-Unequip patch of the Inventory category and the Scroll patch of the Magic category. We only keep the Wood component of the Impact section of the Equip-Unequip patch and randomize everything in the Jingling section. Although it may sound a bit metallic by itself, it creates a nice bones texture once combined with the Scroll sound (in which we totally mute the Whoosh section). 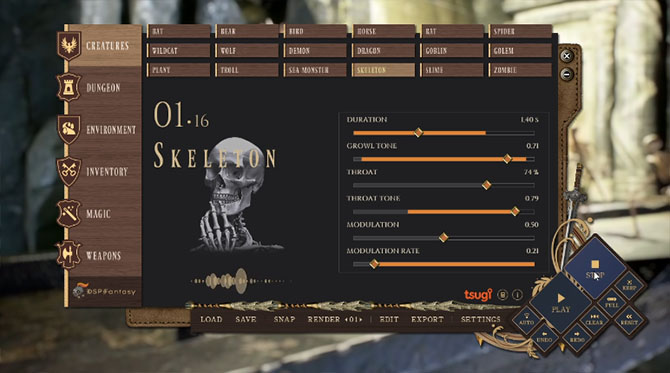 The warrior’s movements are created with the Cloth-Foley patch. Unlike for the wizard in the previous post, who was simply wearing a robe, we keep the Plate and Mail components from the Gear section. Since he is carrying a heavy axe,  we want to add some grunts to emphasize his efforts. This is done by using the Demon patch as it sounds the most  human-like (while still ferocious) from the patches of Creatures category.

As for the axe, we choose to mix the Whoosh component of the Mace patch with the Impact component of the Axe patch, both in the Weapons category. We generate two variations with a different Tone for both patches, and we also layer the impacts with the Hit patch in the Dungeon category,  without its Flesh section. 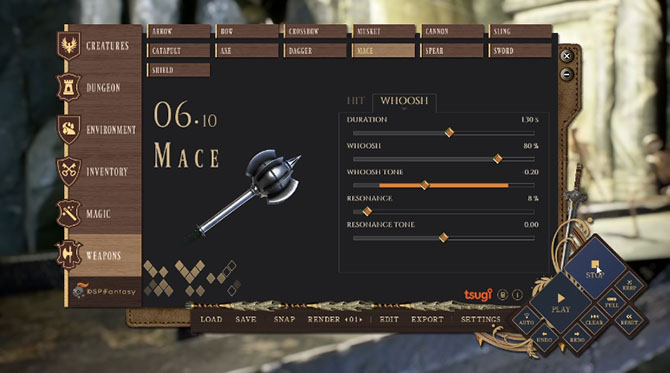 Like for the alchemist’s laboratory, we add a simple environmental ambience by using the Wind patch again, but this time with higher Air Power and Whistling settings, to convey a feeling of altitude. 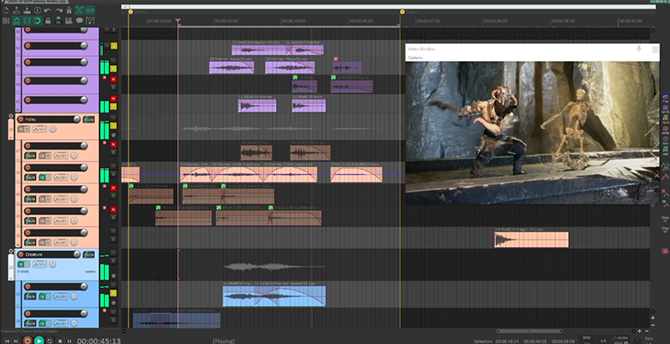 The final sequence sees the landing of a fierce dragon. The Dragon patch already includes Wings and Growl sections. We can adjust their respective Timing as well as the Duration and the Wings Speed of the Wings section to synchronize the sound with the animation. In the Growl section, we increase the values of most parameters, but lower the Throat Tone to create the sound of a larger beast.

Two other layers are added with the Wildcat and Zombie patches. The role of the Wildcat patch is to add more high frequencies to the sound. We lower the Breath – since the dragon already sounds breathy – and the Growl Tone and increase the Maw Size to make it sound like a bigger creature.

The Zombie patch is used to add some modulation at the start and at the end of the sound. Like for the Wildcat, we lower the Growl Tone. We totally mute the Flesh sound but increase the Modulation to its maximum value. Then, in our DAW we only keep the start and the end of the generated sound and synchronize them with the opening and the closing of the dragon’s maw. 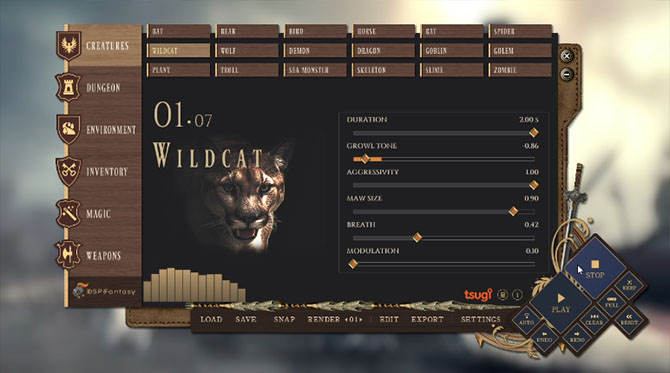 Several layers are also created for the landing of the beast itself. First, we use the Mace patch to give a proper amount of low-end to the sound. We set its Whoosh section at its maximum duration to add some sense of motion during the dragon’s arrival. Then, in the Hit section, we lower all the Tone parameters and boost the Low Impact to have even more sub. For the initial impact, we also use the Hit patch, keeping only the Impact section. As a final touch, we create the impact’s tail using the Cannon patch from the Weapon category. More specifically, we mute the Loading, increase the Reverb Tail, and lower the Tone. This dragon now feels a lot heavier when it lands! 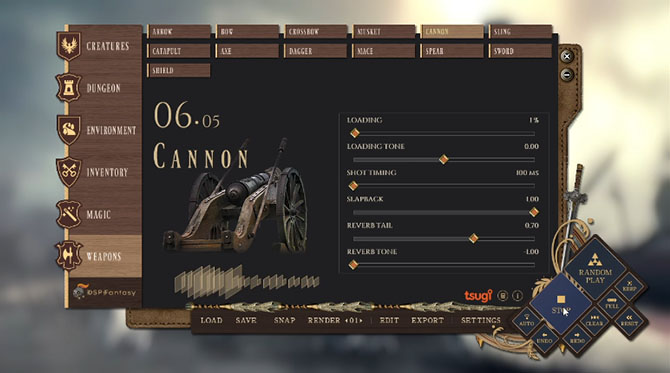 As the dragon is landing nearby the sea, we conjure a few environmental patches for the ambience. First, the Thunderstorm patch of the Environment category is used to create a low rumble sound (we mute the Lightning and add a bit of Distance). Then, we use the Seashore patch to add some water movements to the scene. It doesn’t have to be too powerful, so we lower the Waves Cycle and Amplitude parameters, as well as the Close Waves since we want to keep it in the background. 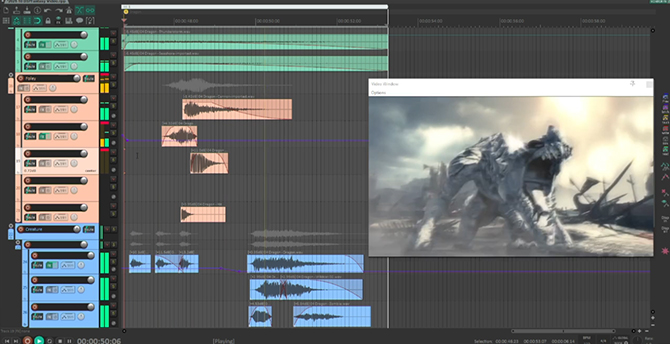 You can hear the final sound design for the whole animation in the video below.

All the sounds have been created with DSP Fantasy. You can use DSP Fantasy and its many sound effects generators (for creatures, dungeons, spells, weapons etc…) in your own creative projects, free or commercial. Let us know what you did with it!