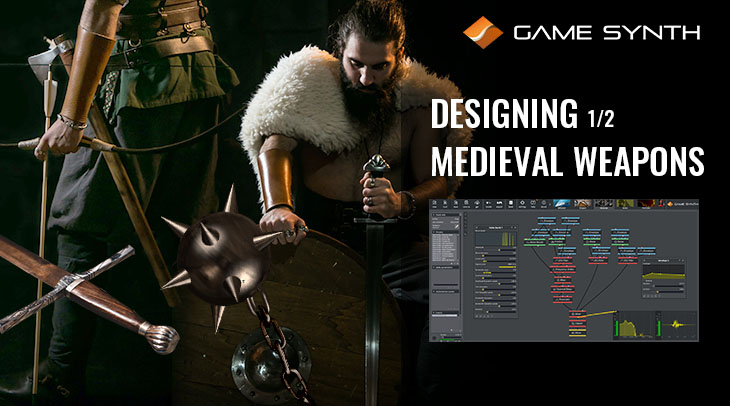 In this 2-part series, we are going full-medieval with the procedural sound design of your favorite weapons from the Middle Ages! After generating the sounds of swords, spears and flails in this post, we will turn our attention to plate armors, bows and catapults next time. Procedural audio is ideal to create as many variations as needed for all these in-fight impacts and whooshes, so get ready to wreak havoc!

Let’s start with the weapon that indisputably evokes the dark ages the most, the sword.

Hit – For extra realism, we analyzed a sample from our sound library in the Impact model. The resonant modes were extracted. Then, we were able to adjust their parameters (damping, pitch …) to create the exact sound we wanted.

This impact patch is called from the Modular model via a Patch Player module. (Note that Meta Parameters have been assigned to the impact patch, so that we can access and tweak them directly in Patch Player.)

No sword sample to analyze? No problem! You can replace the Patch Player by an Impact module followed by a Resonator!

Extra Resonances – A Modes module adds even more resonances in the high frequencies. The combination of both the initial hit and the extra resonances creates fuller sound with nice variations.
Whoosh – Two Noise sources are sent to different filters. The first one emphasizes the low-end and adds weight to the weapon, while the second one creates the airy feeling. Notice the use of the Lerp module: by assigning a random range to its Ratio parameter, a new random envelope (interpolated between the two provided Envelopes) is generated for each playback, making the sound slightly different each time!

Thanks to its reach the spear was the favorite weapon of mounted knights. In this patch we focus on the sound of the spear moving through the air.

Scrape – A Friction module (with its Material set to Metal) and a Noise Bands module are combined to create a scrape-like sound. The Friction module is sent through a Frequency Shifter to make it sound higher, and through an EQ Filter (configured as a Bandpass) whose Frequency is controlled to simulate movement.

In the Noise Bands module, several narrow bands in the high-end help create a metallic sound. A Spectral Delay is used to a more natural release to the sound, while a Resonator is set to emphasize specific frequencies.

To fine-tune the resonance of your weapon, simply adjust the Feedback parameter of the Resonator module.

Whoosh – Like for the sword, two Noise generators are used. The Envelopes controlling the filters are different though, to simulate a heavier weapon. Note how the durations of the two sources are different, to create more realistic movements. 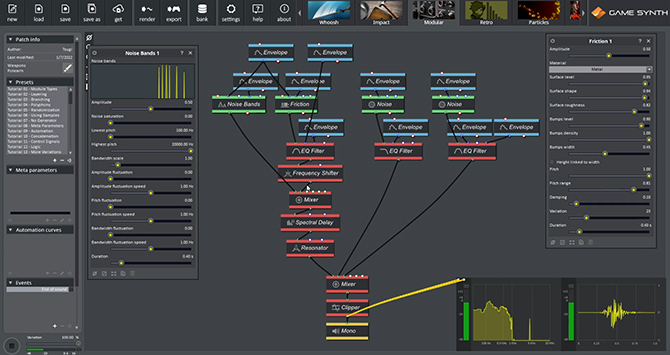 The flail with its head full of spikes was a particularly terrifying weapon. Here we generate the sound of the chain spinning around.

Chain – A Noise Bands module with a lot of narrow bands in the high-end and a short Envelope create the basis of the metallic sound. Modes and Impacts modules are added to make the sound more percussive.  Gait modules give a more granular feeling to the chain, triggering a lot of impulses in a short amount of time. The Spectral Delay also greatly helps in that matter, with the added bonus of reducing the transients generated by the Modes and Impacts modules.

Whoosh – This time we used a single Noise Bands module to generate the whoosh. Modulating its Pitch and the Bandwidth parameters is adequate to simulate the air displaced by the flail.

Modify the curves of the Envelope modules controlled by the Retrigger to simulate different types of movements! 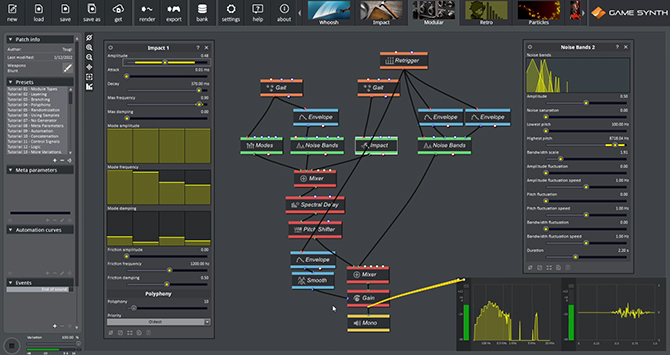 This concludes the first part of this series on medieval weapons sound design in GameSynth. Don’t miss the next part, where projectiles will fly while we synthesize bows and catapults!