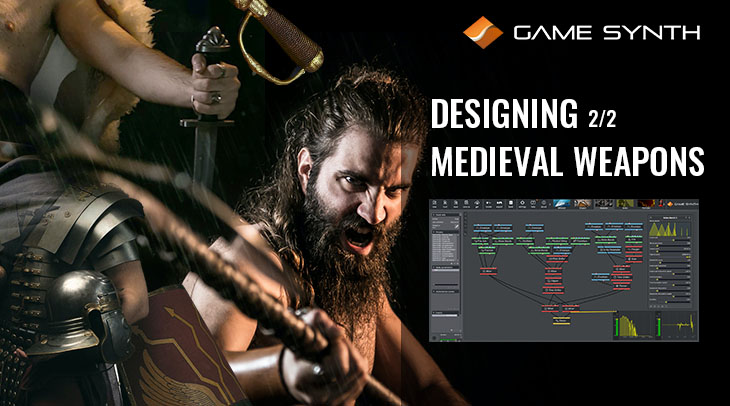 Take cover as we design the sounds of bows and catapults in the second part of this series dedicated to medieval weapons in GameSynth! Thankfully, we will also create a plate armor patch to protect ourselves!

The bow was an essential part of medieval warfare, where large formations of archers could rain arrows on enemy troops. The sound design for the bow can be thought of as a sequence: first the bending, followed by the shot, and then the arrow swish.

Bending – The bending of a bow can be accurately simulated by a couple of Fracture modules using Natural Fibers and Rubber(!) materials. An extra Noise Bands module adds more friction.

Shot – A Plucked String module with a low Pitch and a short Duration is connected to a Pitch Shifter controlled by an Envelope to create a distinctive bowstring sound. The Scuff component of a Footsteps module creates a nice and short friction sound. Finally, a Noise Bands module and an Oscillator generating a sub sine wave, both driven by a very fast Envelope, add more punch to the sound.

Swish – The sound of the arrow departing is generated by another Noise Bands module. To create the characteristic whistling sound, a lot of narrow bands were added in the mid-frequencies.
You can add more layers to this part! For example, a Fire module followed by a Flanger will create a very convincing flaming arrow sound!

Sequence – Time Shifter modules are used to control the timing of the different events in the sequence. By adjusting their Length (and the Duration of the different generators), it is easy to create many variations, or to synchronize the sound with an animation. 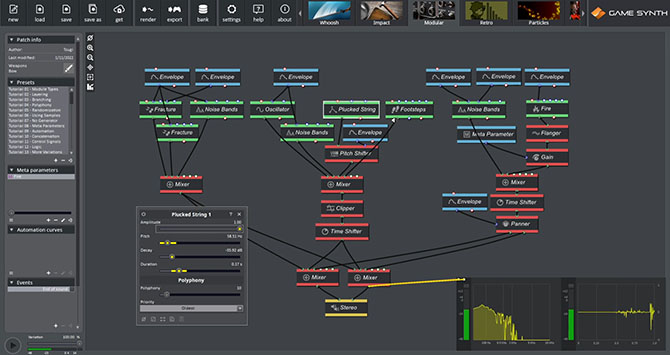 Catapults were large ballistic devices capable of launching projectiles at great distances. Like the bows, their sounds can be designed as a sequence of events.

Start / Stop -The key to a realistic catapult sound is its woodiness.

The Modes module that is triggered at the start and at the end of the patch is an important of part of it. The Spectral Delay adds more presence to the sound.
By adding a lot of modes within a narrow frequency range, convincing wood impacts can be generated!

Tension – A Gear module is used during the tension phase of the catapult. Although this module generates a metallic sound, after being sent to a Chorus module and a 5-band EQ which emphasizes some key frequencies, the result sounds like a wooden mechanism. The various Fracture and Friction modules reinforce that perception.

Release – A Clang module simulates the loud noise emitted when the throwing arm of the catapult hits the frame. This is quite a violent sound, so most of the parameters of the module (Force, Impact, Size) are set to high values. For a more pronounced effect, it is accompanied by a whoosh (using the same system than previously). Like for the bow, it is possible to add a fire layer to evoke flaming projectiles. 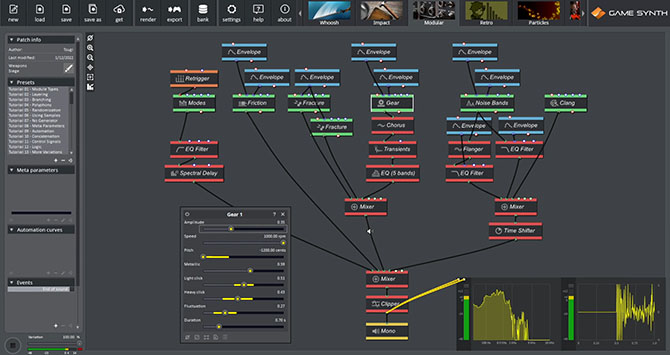 This type of armor was made from metal plates that could in some cases entirely encase the wearer. Needless to say, a knight wearing such a body armor was not exactly stealthy, and here we design the sound of the plates colliding.

Hits – Similarly to the chain of the Flail, we want to hear several layers of metal colliding with each other. This is achieved by triggering a Clang module multiple times with a Gait module, and going through a Spectral Delay to add some resonance.

Friction – To add more body to the sound, a second branch of the patch sends the output of a Noise Bands generator though Spectral Delay and Resonator effects.

Although this already produces a nice metallic friction sound, the trick here is to control the Amplitude of the Noise Bands with the output of the Clang layer by using an Envelope Follower. In this branch of the patch, the Clang layer acts as a transient generator, triggering a resonating layer.
By assigning random ranges to several parameters, we ensure that each impact will sound different for a more realistic result! We can generate hundreds of variations for our game or animation!

Cloth – As a final touch, another layer made of filtered Noise Bands adds some extra cloth friction sounds.

This concludes our 2-part series on the procedural sound design of medieval weapons in GameSynth. All these sounds are or will be shortly in the repository.