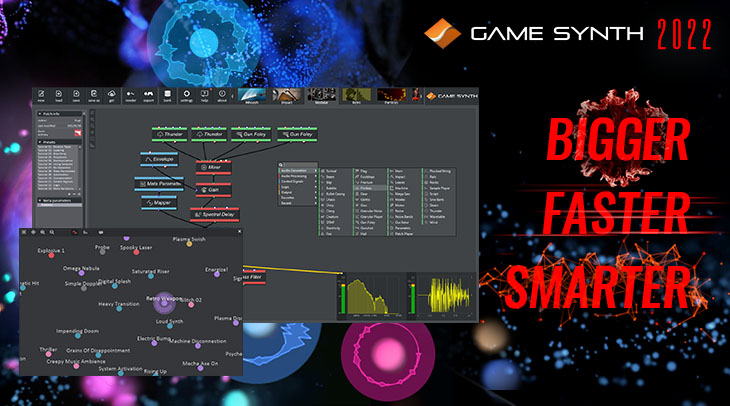 We are thrilled to announce the release of GameSynth 2022. With this massive update, the leading procedural sound design tool gets bigger, faster, and smarter than ever!

The GameSynth repository is the largest collection of procedural audio models for games and animations. In this new version, it now hosts more than 1000+ high quality sound models of all types, easily searchable, and ready to be tweaked or used directly in your creative projects! Inspiration is just one click away!

GameSynth has always been a feature-packed tool, with many specialized synthesizers (Particles, Weather, Footsteps, Whoosh, Impact/Contact etc.) and a patching environment that lets you create any sound you can imagine. This new version comes with no less than 130 modules, including new generators such as Horn and Parametric, processors like a formant profiler and a wavefolder, control modules such as a the Drifter and many more. Existing modules have been improved too! 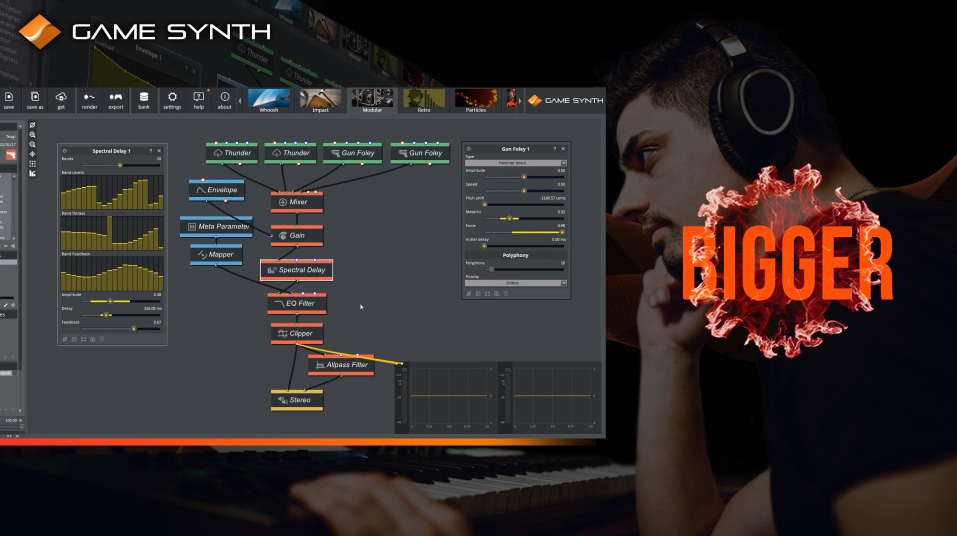 The VoiceFX model also got plenty of new effect racks to create all kind of vocal effects, from monsters and aliens to robots and communications interferences. Among the new processors are a Comb Filter, Frequency Shifter, Resonator, Spectral Delay, Stutter, Tube and more!

The Sketch Pad, a central feature of the GameSynth workflow that lets you literally draw your sounds, has not been forgotten, far from it! The new SVG import allows you to create accurate and sonically interesting curves in tools such as Inkscape and Illustrator to drive GameSynth’s sound models. Many new functions have also been added to the Sketch Pad scripting, as well as a new guiding grid.

Finally, the list of integrations has been growing too. In addition to Wwise, FMOD Studio, ADX2, Unity, Cocos 2D and Reaper, it is now possible to automatically generate and export sound variations to Audacity and GameMaker Studio. The import of animation curves now supports Live2D and GameMaker Studio, in addition of Sprite Studio, Spine, Houdini, FXB files, Unity and even BVH motion capture data. This is perfect to synchronize sound and animation automatically, even if you change your curves frequently.

Modular patching in GameSynth is faster than ever – and dare we say, faster than in any other sound patching environment!

The brand-new module selector makes it easy to quickly select the right module for the job, based on its type, its name, if it has been used recently or if it is one of your favorite modules. 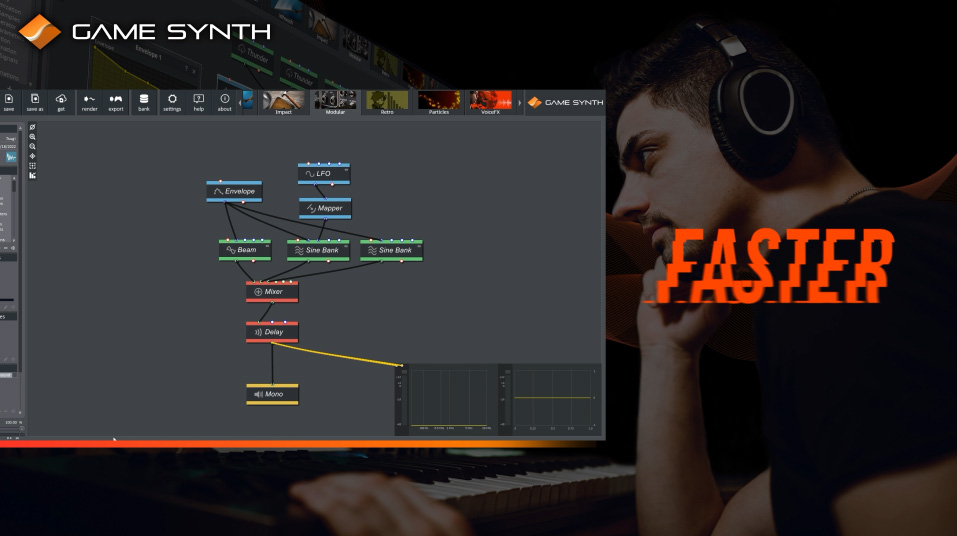 In addition to the many unique patching features already present (in-place swapping of modules by similar ones, detection of unused modules etc.), the new snap wiring and automatic rewiring after insertion and deletion of modules make patching a breeze.

The new wire context menu allows for the instant duplication of wires to connect to similar modules and plugs. For example, if an envelope controls the pitch of a sound generator, it is possible to select other generators and right-click on the wire to connect that envelope to all the pitch inputs of the other generators.

Checking the signals that go through your patch is faster than ever too, with the new partial playback function. You can also hover over a plug and press a key to automatically connect it to the signal analyzer.

Thanks to start-of-the-art AI algorithms, GameSynth got a lot smarter too, and will help you find and create interesting patches more easily.

The new repository map lets you browse patches based on their perceptual features, with similar sounding patches displayed close to each other. For example, a sound designer may want to create a patch for a distant explosion. While navigating the map, a storm patch may appear nearby the explosions sounds, inviting the designer to experiment with the Thunder module to generate distant explosions. 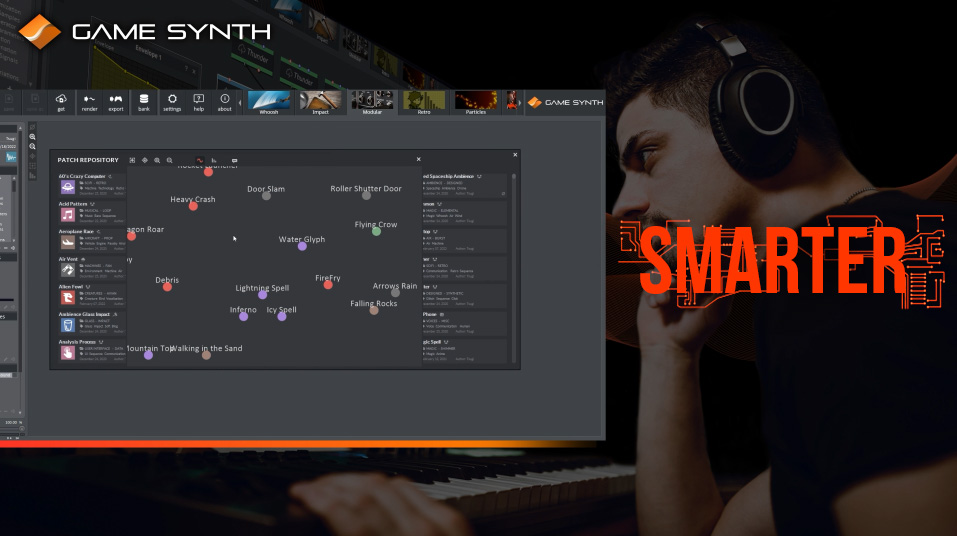 Still in the repository, it is now possible to drop a wave file to find procedural sound models that will generate similar sounds. This is perfect to get you started with your patching in no time!

The repository can now also find sound models based on the type of modules they use, which is great when learning how specific modules work.

Finally, the random patch creator – another tool to quickly get your creative juice flowing – has also been improved and can generate new patch structures.

GameSynth 2022 includes many other new features and improvements, such as support for UCS 8.1 and optimized run-time export. Discover them all by downloading the new version today, thanks to our lifetime free updates.