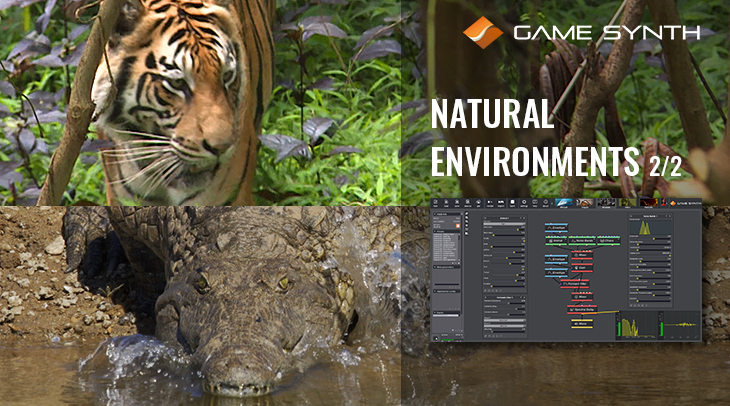 In the first part of this tutorial dedicated to the procedural sound design of natural environments, we learned how to generate ambient sounds, such as the seaside, forest grounds, or a waterfall with GameSynth. We also created patches that simulate the sounds of various birds and insects. In this second part, we will focus on the movement of larger animals. As a reminder, here is the final video.

The tiger movements are composed of 3 distinct patches: the footsteps, the rustling grass, and a low growl.

Footsteps – Two Footsteps modules with slightly different settings are used to get a more interesting sound.

The first one uses the Grass Surface with Dress shoes – it is a fancy tiger – for a sharp sound, while the second one uses the Leaves Surface to add some rustling during the release of the sound. Random ranges have been assigned to the Pitch and Scuff parameters to create variations while the Gait module triggers the footsteps at a slow pace.
During a walk cycle, animal footsteps can have different intensities. The Value output of the Gait module will send the amplitude of the events triggered. This is convenient to generate more natural footsteps. 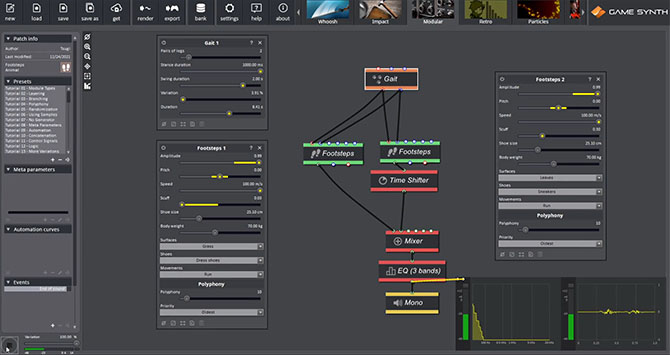 Grass Rustle – While on the move, the tiger passes through the vegetation. Like for the forest ambience, a Leaves module is used as the primary sound source, but with more Fluctuation this time. Using a Rain module may seem surprising, but selecting the Grass Material for the drip impacts will produce convincing vegetation rustle. A Granular Noise with low Density going through an EQ will complete the rustling in the high-range frequencies. Since this sound will be mixed with the Forest ambience, it is pitched down a bit to prevent too much overlapping. Finally, a Perlin Noise generator is used to create a random but natural movement for the rustling, by modulating the main amplitude of the patch. 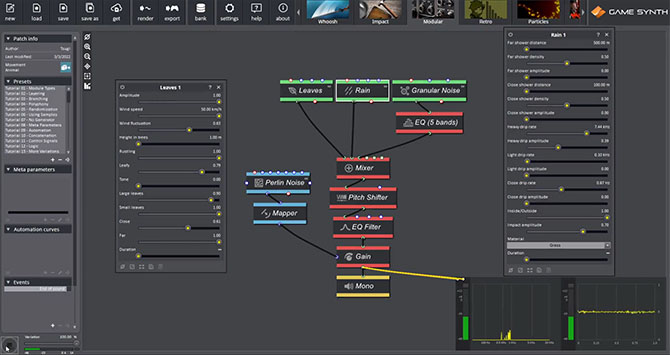 Tiger Growl – The Animal module conveniently includes a Tiger mode with which we can create a slow and growly sound by setting low Modulation and Pitch values. The Noise Bands module is used for the breathy part while the Chaos module adds some low-end. The Formant Filter plays a key role: by modulating the Morphing parameter, it is possible to switch between two set of formants, simulating the inspiration / expiration phases of the breathing cycle.

Footsteps – A Footsteps module with its Surface set to Carpet and followed by an EQ simulates dirt, while the triggering is again provided by a Gait module. A Rain module is used to add some muddiness. Its Amplitude is controlled by an Envelope Follower fed by the Footsteps output. This ensures the two sound sources glue well together.

Since the crocodile progressively enters the water, an extra layer built around Goo and Rain modules is added to the footsteps.

The wetness is controlled by a Meta Parameter and the Duration of the Stutter module is used to trigger smaller or bigger splashes (the higher the Meta Parameter value is, the longer the Stutter gate will stay open). The Triangle Shape of the Stutter, along with a low Duty Cycle value, allow for an impactful envelope.
In the rendering window of GameSynth, you can automatically generate sound variations by sweeping Meta Parameter values. Here, it is very convenient to quickly render footsteps with several level of wetness. 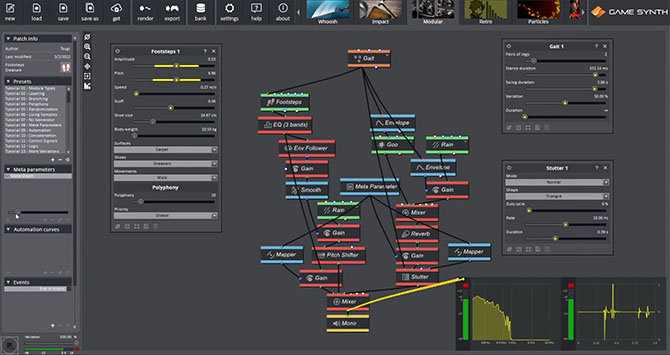 Water Splash – A specific patch was created for the main water splashes, relying on two Goo and a Rain module as main sound sources. The Goo modules cover different frequency ranges, while the purpose of the Rain module is to shape the movement of the sound. A filtered Noise module (whose Cutoff frequency is modulated) simulates the small ripple created by the splash. Random ranges are assigned to several parameters (especially the Envelope Duration and Variation) to generate different splash sounds. GameSynth makes it easy to produce many variations and to pick the best ones later. 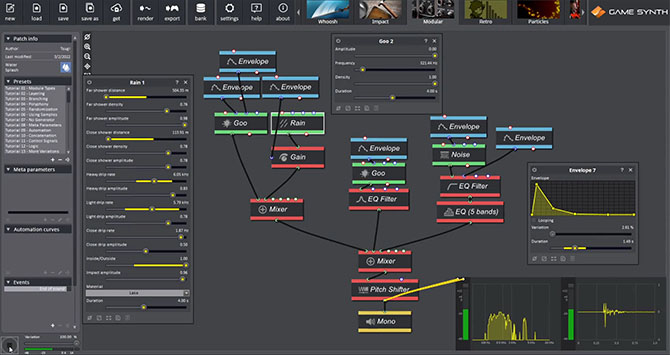 Water Movement – Goo and Rain modules are once again used to create the lighter water movements. This time, a Bubble module is also put to contribution to produce a light trickle of water. The Automation Curve is used to control the Density/Rate parameters of the sound sources, imitating a gentle wave movement. The Drifter module following the Automation Curve add slight variations to the control signal, creating a more realistic sound. 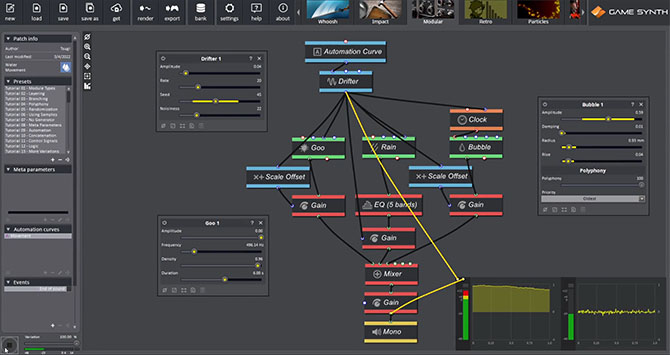 Diving – The goal of this patch is to put more emphasis on the crocodile’s diving and to complete the water movement started above. A Hail module has its Material set to Lake and its output is sent through a Ring Modulator to mask the transients and make the sound more organic. Goo and Granular Noise modules contribute to the water flow.

The Doppler module emphasizes the feeling of the crocodile sinking into the water. The Distance parameter is controlled by an Envelope to mimic a gentle passby. To prevent a too drastic pitch modulation, the Envelope is set to be decreasing slowly. More effects such as Chorus and EQ are added before the output to smooth the sound. 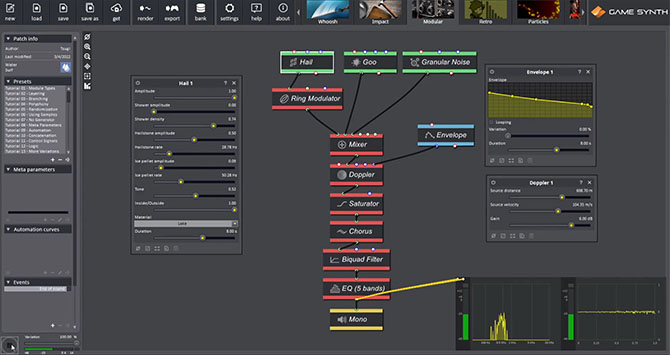 This concludes our 2-part tutorial on the synthesis of natural environments with GameSynth. While these sounds are definitely more lowkey than the action-packed patches of recent tutorials, they can be used in large variety of mediums, from game to animation and videos, and show the wide range of sounds procedural design can generate.

You can download all these patches below and experiment with them to create your own soundscapes.