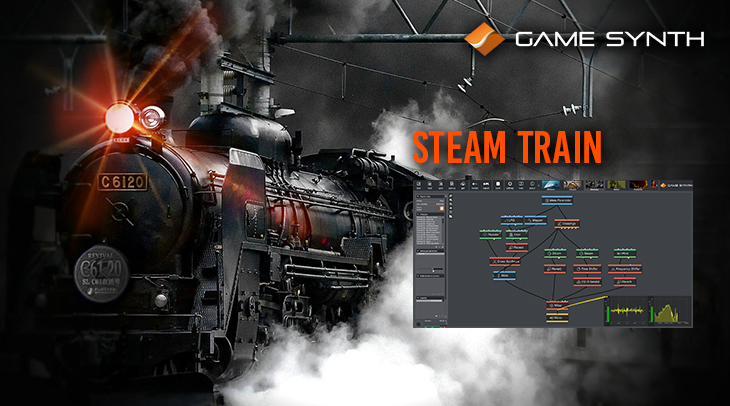 In this new installment of our ‘Patch Anatomy’ series – in which we dissect advanced GameSynth patches – we examine the synthesis of a steam train, complete with engine, steam and whistle sounds. All aboard the choo-choo train!

A Gear module is used to generate the repetitive, mechanical sound characteristic of an engine. Its amplitude is modulated by a LFO with a Saw Up shape and a different frequency, creating small variations in the rhythm of the engine. Cross-Synthesis with a Thunder module makes it a real steam engine sound by combining the mechanical clanging with the release of the thunderclap.

The whistle uses the new Horn module (introduced in GameSynth 2022) for generator, which gives its slow pitch and amplitude attack to the sound. The characteristic timbre of the whistle is built by sending the output of the Horn through a Frequency Shifter. An additional Reverb gives more presence to the sound, almost like if the train was coming out of a tunnel.

The sound of the steam is based on two eponymous modules. The first one goes through a Reverb that gives it a longer tail while the second one, slightly delayed by a Time Shifter, is equalized with an EQ 5 bands to have more presence in the low frequencies. Mixed together, the two Steam modules create a denser sound.

Speed control is achieved via a Meta-parameter.  Its range is constraint by a Mapper module, whose output drives the Speed input of the Gear module, thus controlling the whole engine.

When the speed is too low, the train stops and steam is released. To achieve this, the value of the meta-parameter is compared to a low threshold in the Crossings module. The Triggering mode is set to ‘Once, decreasing value’ so that the train will stop only once, and only if it is decelerating.

The output of the Crossings module triggers the Steam modules, but also activates a Mute module placed after the engine section of the patch, effectively shutting down the engine.

You can download the Stream Train patch below. The GameSynth patch repository includes several other train patches, check them out!