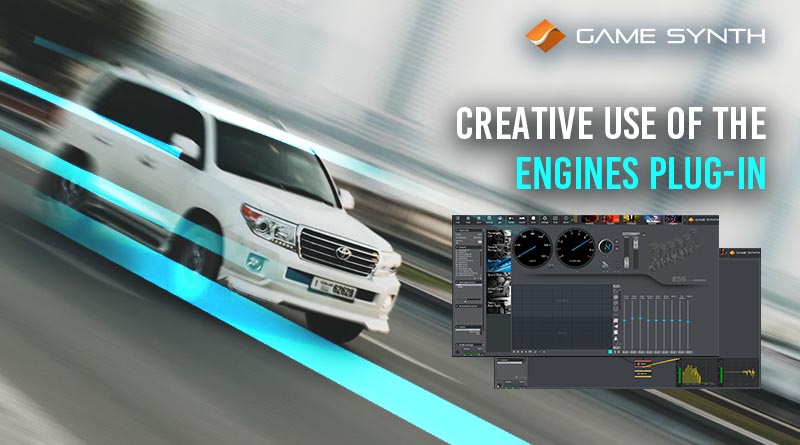 GameSynth’s Engines plug-in allows for the physically accurate modeling of engines, from racing cars to trucks, and from sedans to sports bikes. It offers an intuitive interface to control the model, literally as if you were driving it!

In this post we will go one step further, and see how loading engine patches in other GameSynth models opens the door to new sound design possibilities, like creating realistic vehicle pass-by in no time with the Whoosh model, or designing futuristic spaceships in the Modular patching environment!

First let’s generate some steady sounds with the Engines plug-in. This means that we will not use the Sketch Pad to control the engine, but rather meta-parameters that will later be referenced by the Whoosh model.

Here is the breakdown:

It is time to switch to the Whoosh model. Before playing the sound, let’s set up a few things:

Once this is done, load the Engine patch.

Now the Meta-Parameters we set up earlier should be available in the drop-down menu.

Now you can literally draw your pass-by sound on the Sketch Pad!

Experiment with different drawings and durations. Depending of the type of engine, you can use the EQ on specific frequencies and adjust the Saturation parameter to generate more aggressive sounds.

You can also come back to the Engine model at any time, tweak the sound or change the vehicle type. Once you save the patch, these changes will automatically be reflected in the Whoosh model.

Finally, you can adjust the variation parameters (Pitch, Duration, Movement or Deflectors) to instantly generate hundreds of vehicles pass-by!

The extensive collection of synthesis and processing modules available in the Modular model can then be used to transform the sound. In this case, we will load a patch created in the Engines plug-in and transform it to generate the sound of a landing Spaceship!

At this point, let’s add some processing to make the engine sound more futuristic.

The Modular model also allows us to add new generators to expand the sound further. For instance, let’s add a reactor sound:

Don’t hesitate to mix models like we did here with the engines plug-in, it allows to get complex results with simpler patch structures and to save a lot of time!