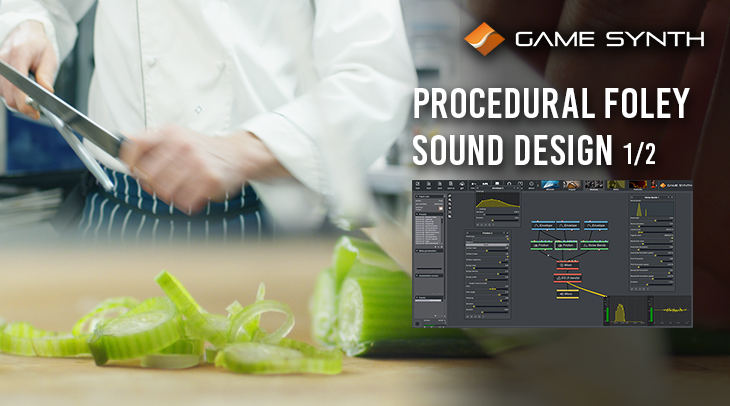 Procedural audio can be a great alternative to Foley recording: faster (no need to go on location), cheaper (no recording hardware and props needed, no Foley pit to build) and less messy (although it is also part of the charm!).

Furthermore, because they can be resynthesized, the sounds can be tailored to any project without requiring a new take, or post-processing. The dynamic range is always maximized, and many variations can be generated in seconds, automatically matching animations curves if needed.

But what about the realism of the sounds? After using GameSynth to design sound effects for action sequences and natural environments, we will this time create realistic Foley sounds for scenes of the daily life, more precisely a kitchen scene. So, what’s cooking? Let’s check in this video, in which all the sound effects have been generated procedurally, without using any samples. 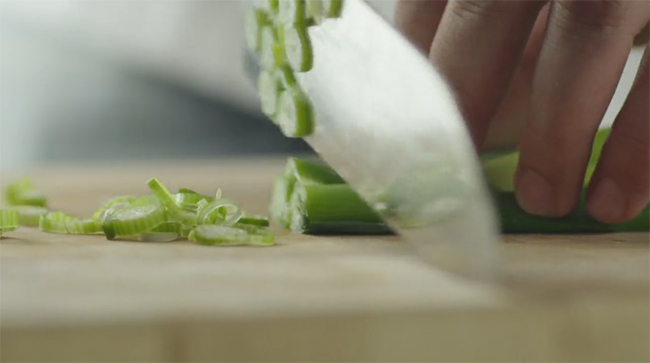 A single room tone patch is used through the whole video, with different settings to adjust the power of the kitchen’s air extractor for the different shots.

The patch consists of 3 branches. The first one uses a pink Noise followed by a Biquad Filter configured as a Lowpass, with a cutoff around 1400Hz to simulate a low rumble. The second branch uses a Noise Bands module with two narrow bands in the low-mid frequency range and a slow Pitch Fluctuation: this simulates the sound of the air extractor. Then third branch is based on a Sine Oscillator followed by a Chorus, which adds a small hum to the room tone.  Finally, an EQ (3 bands) dampens the high frequencies of the signal, which is then sent to two slightly detuned Reverb modules to create a stereo effect.

These initial settings are adjusted for the second shot in the video. Since it is a close shot, the room tone is made quieter to create a more intimate feeling, by lowering the HighGain and MidGain of the EQ (3 bands).

For the third shot, larger bands are added to the Noise Bands module and the Cutoff of the Biquad Filter is increased to around 2000 Hz. This creates a more powerful hiss for the extractor as the chef is now cooking. The Oscillator’s frequency is also increased to simulate the higher speed of the ventilation. 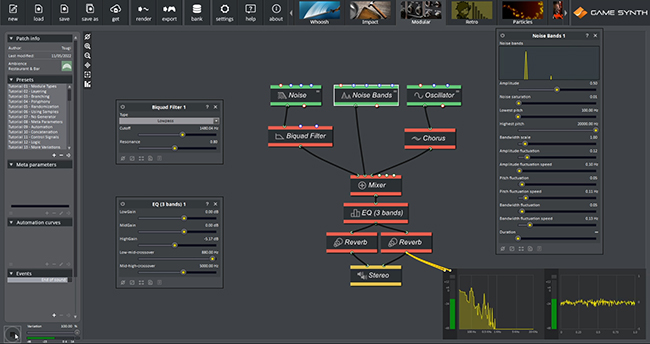 The first sequence of the video shows a chef sharpening his knife. Two patches were created: one for the initial impact of the knife on the sharpener, and one for the friction movement.

Knife Hit – The Impact module generates the base sound of the knife hitting the sharpener. It feeds a Resonator that adds harmonics around 9kHz, making the sound a bit less dry.  For more impact, a Noise Bands is added on a second branch (with five narrow bands spread between 5 and 15kHz). The pitch is randomized to create variations in that range, with an additional EQ (5 bands) module emphasizing some of the resonances. The final Reverb module blends the two branches together, also adding a bit of distance.

An easy way to simulate different materials (metal, glass, wood…), is to use an EQ (5 bands) module with all bell-shaped bands, maximum Q, and several dB of gain. By adjusting the location of the spectral peaks, various effects can be achieved, such as a wood-like resonance in the 100-300Hz range, or a metal-like resonance in the 500-5000Hz range. 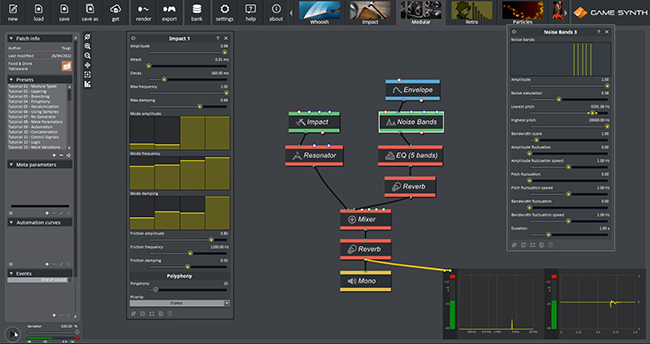 Knife Sharpening – A Friction module whose Material is set to Metal is used as the main sound source, with some narrow bands in the high frequencies added by a Noise Bands generator. The idea is to modulate the pitch of these modules to simulate the sliding sound of the knife on the sharpener. The Frequency Shifter module indeed shifts the signal to a higher frequency range while the EQ Filter – configured as a Bandpass – creates movement via its modulated frequency and resonance. Compressor, Clipper, and Gain modules are used to increase the overall volume. 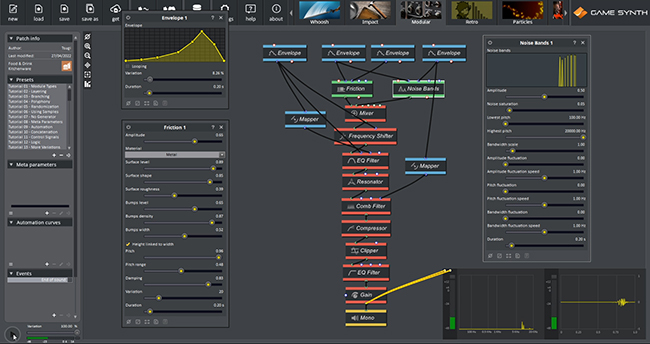 Cloth – To add some presence to the character, an extra cloth patch was also designed. It relies on a simple Noise Bands module followed by an EQ (5 bands). Its overall amplitude is modulated by a Perlin Noise, which generates random movements. By adjusting the rate, movements at different speeds can be generated, making this patch useful for the other shots as well. 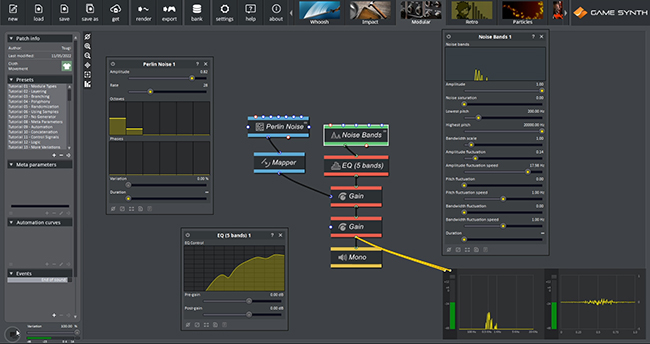 The next shot shows the preparation of the green onions, with the chef cutting them before cooking.

Slicing – A Granular Noise module followed by a Saturator simulate the crunchiness of the onions.  A short Envelope of around 0.1 second controls the amplitude to mimic the movement, while the final EQ (5 bands) attenuates the low and mid frequencies. Since the action is repeated several times, random ranges have been assigned to the Granular Noise parameters and the Envelope’s variation is set to 15% while its Duration is also randomized. This creates just the right amount of variation to get realistic and non-repetitive cutting sounds. 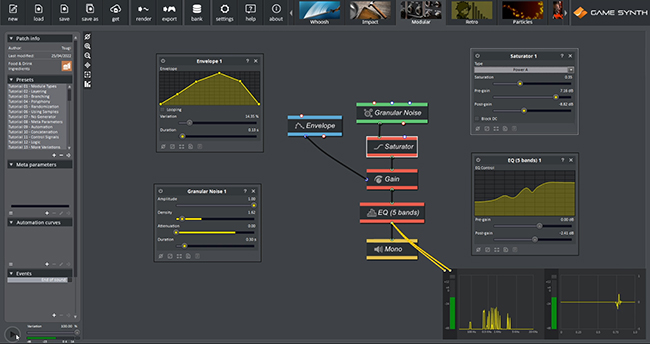 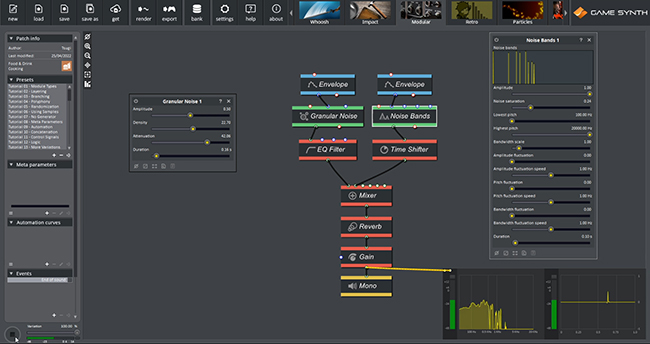 This concludes the first part of this tutorial about realistic Foley sound design using procedural audio techniques. Join us for the second part, as we cook and serve you this tasty meal!