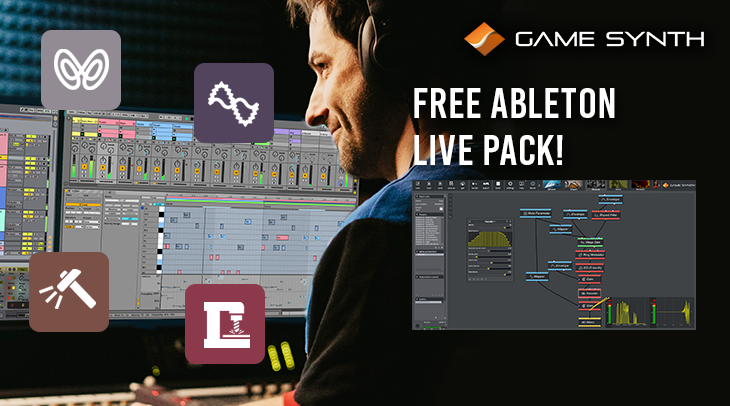 Creating unique and innovative drum kits with GameSynth is quick and easy. The 130+ modules of its patching environment cover everything from the physical modelling of impacts to chaotic oscillators, and GameSynth allows for the automatic generation of sound variations, making the whole process straightforward.

In this post, we highlight some of the features we used to create 5 types of drumkits that you can download for free as part of an Ableton’s Live Pack.

In addition to a few simple sounds made with subtractive synthesis and short percussive envelopes, Chaos or Parametric modules were used to produce more original and harsher, digital sounds.

Beam, Mega Saw and Blip modules were also put to contribution, adding a touch of FM synthesis, super-saw, and phase distortion to the kit. Finally, although not used this time, we should mention that the Sine Bank module can be very useful to create shimmering glitchy sounds.

On the processing side, Ring Modulator and Degrader modules were used to harshen the sound, while Vocoders and very short Delays helped creating a more robotic sound when needed.

Many of GameSynth’s specialized generators intended for game sound design (e.g., Clang, Gear, Impact or Gun Foley) are also perfect to create the type of mechanical impacts found in an industrial track. The Steam and Motor modules can even add a steam punk flavor to a kit!

The metallic resonances characteristic of industrial sounds are emphasized by the Resonator module, while Comb Filter, Tube or Spectral Delay are used to highlight the acoustic properties.

Processing relies heavily on the Saturator, Clipper and Compressor modules to get a louder sound.

With this kit, the focus is on realistic sounds. Due to its primary usage, Foley is an area where GameSynth especially shines. In this kit, the Modes, Impact or Plucked String modules are used to simulate the sounds created by the interactions with various objects.

In addition, sending Noise and Noise Bands generators through the right filters can also recreate realistic sounds. Due to its extra control inputs, the EQ Filter was used when modulation is needed, while the 3-band parameteric and 5-band graphic EQs allowed for the tuning of the overall spectrum of the sound.

But don’t let that limit you, as there are many Foley-related modules to explore in GameSynth!

This kit has a bit of a Kraftwerk vibe, and makes good use of the Vocoder module to give a robotic feeling to a variety of sound generators such as Blip, Gunshot or Gear. A combination of Blip and Degrader modules was also used to create several low-fi, digital sounds.

The Motor module was invoked to produce a tonal sound reminiscent of a robotic servo, while a SineBank module generates a high-pitched metallic impact. Finally, the Beam module was used to create two harsh beeps.

Our last kit is all about watery sounds. The Bubble module was used as the basis of many of the patches, from rising low-frequency sounds that can be used as kicks, to tiny high-pitched tones that can replace hi-hats.

The Goo module is great at creating watery textures and mostly contributed to splashy sounds. Thanks to its many parameters, the Rain module is very polyvalent, generating a wide range of sounds from noisy textures to individual drops. It was used here to create snare-like sounds. We even used the Footsteps module with its surface set to mud for a couple of squelchy sounds!

To modify a drum sound based on velocity, a Meta Parameter can be assigned to the amplitude of the patch in GameSynth.

Of course, this is done automatically by Live, but a single Meta Parameter can also control several parameters independently with the help of Mapper modules. We use this to our advantage in the Kick patch of the Industrial kit for example, where a Meta Parameter not only controls the main amplitude, but also the upper frequency of an Impact module, and the amount of feedback in a Comb Filter – adding more resonances as the velocity increases.

The rendering function of GameSynth allows for the automatic export of sound variations for different Meta Parameter values, speeding up the creation of drumkits considerably. For the kits described here, 20 sounds were generated with an increasing velocity, from a single click!

In addition to drums, GameSynth can be used to design many other original sounds for your music productions. For instance, check out this post for a tutorial on how to design the drone sounds shown in the video below. It is also possible to use its physical modelling generators to create the sounds of mallets, plucked strings and more. 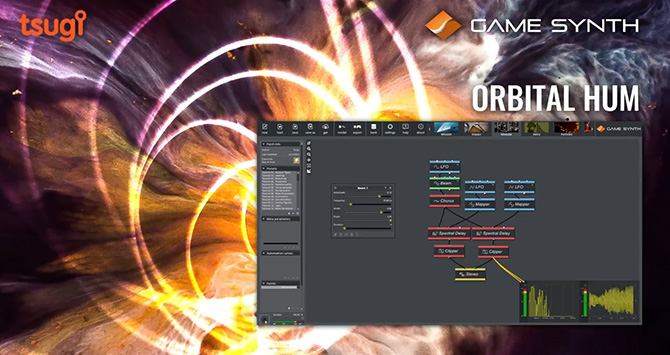 The Ableton Live Pack containing the 5 drum racks can be downloaded below (Live 11 required). All the GameSynth 2022.1 patches used to create the sounds are also included in the package.