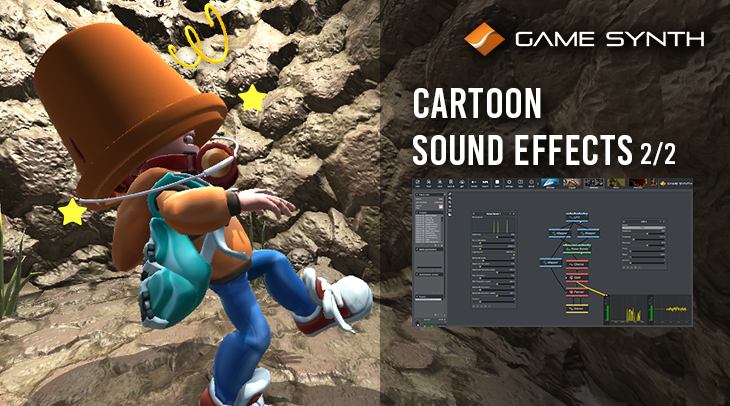 In the second part of this tutorial, we will learn to design more cartoonish sound effects using procedural audio, including a laughing rabbit. Yes, you read that right: we will synthesize a laughing rabbit in GameSynth. Really, what more could you ask for? First, let’s check the final video once again.

Falling in the pit

Objects and characters falling down are the bread-and-butter of comical effects in cartoons. Sound-wise, they often rely on long descending sweeps followed by exaggerated impacts. For the falling boy, we opted for a whistle-like sweep sound.

The impacts are often over-the-top: explosions, punches or gunshots are often used. Classic percussion sounds can also be added for emphasis.

One of the many ways to produce impact sounds in GameSynth is to send short impulses through filters that emphasize frequencies specific to a particular material. Adding resonator-based modules such as Tube, Comb Filter etc. will lead to more complex sounds. Don’t forget the dedicated Impact model too!

After the impact, the rabbit, finding the whole situation hilarious, begins to laugh hysterically (we know you have been waiting for this part!). GameSynth comes with various modules to simulate character or animal reactions. In this case, we went with the most basic ones.

The audio transition between the surface and the bottom of the pit was generated simply by drawing on the Sketch Pad of the Whoosh model. GameSynth offers many specialized synthesizers with very intuitive interfaces, so don’t hesitate to use them to create sounds even faster!

After crashing down the pit, the boy is dizzy, at least until a falling plank hits him!

To evocate dizziness, two patches were layered together:

The video ends with a 2-step iris out effect, a popular transition in cartoons.

We should also mention that a couple of ambiences were added to make the video livelier. While relatively quiet, they add context to the scenes.

The cavernous ambience at the bottom of the pit is generated by a simpler patch.

As always, you can download all the patches described in this tutorial below. While they the tutorial was primarily aimed at animation, this style of sound design is well suited for many fun and casual games!