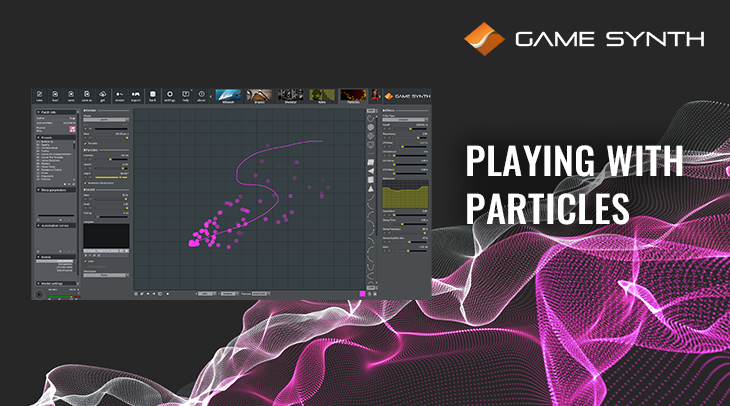 The Particles model is certainly one of the most immediate and enjoyable models available in GameSynth: Simply drop a few samples and draw with your mouse to instantly generate compelling sounds using granular synthesis. In this post, we will describe some of the features that make the Particles model so interesting, by creating these patches: 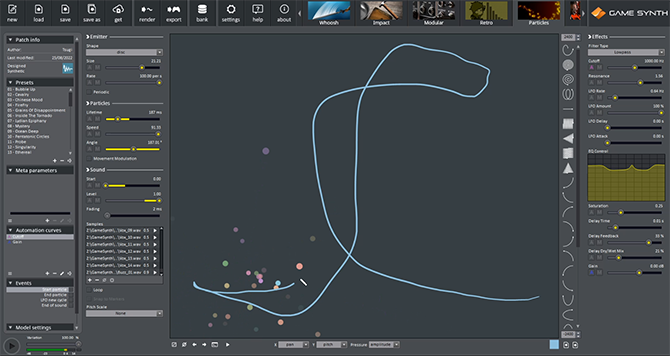 First, a quick refresher: the Particles model is a granular synthesizer that uses the same paradigm as particle systems common in 2D and 3D graphics. As such, an emitter generates sound particles, with a given rate and pattern. The particles emitted have a direction, a speed, a size, and a lifetime.

The sound of a particle comes from a randomly selected wave file. By drawing on the Sketch Pad with a mouse, all the sound particles parameters can be modulated, providing a very fun and easy way to create intricate soundscapes. Using a graphic tablet even adds pressure to the list of modulation sources. The video below shows some examples from the GameSynth repository: 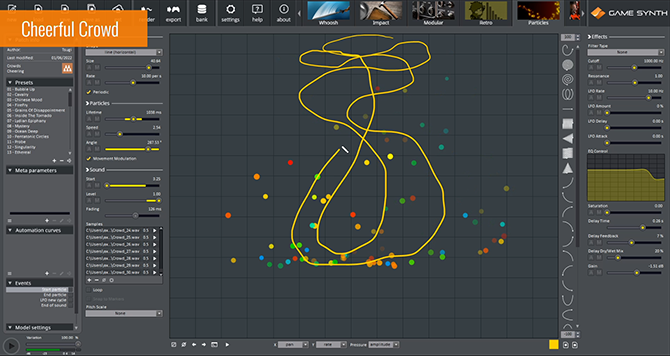 Tip: in addition to drawing, it is also possible to import SVG files by dropping them directly on the sketchpad. So, you can use your favorite graphics package to prepare sonically interesting vector art. Additionally, C# scripting allows for the creation of curves otherwise impossible to draw manually. 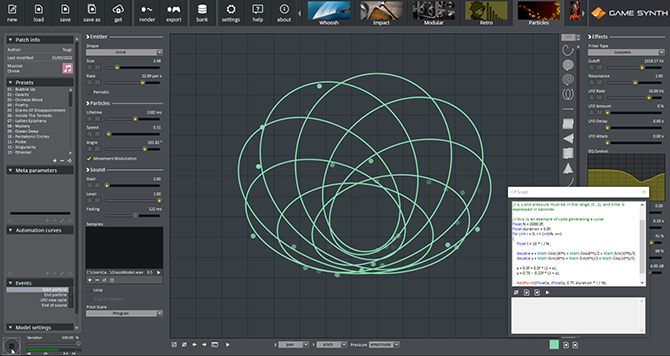 For the first patch of this post, we designed a funny cartoon sound using a single sample. 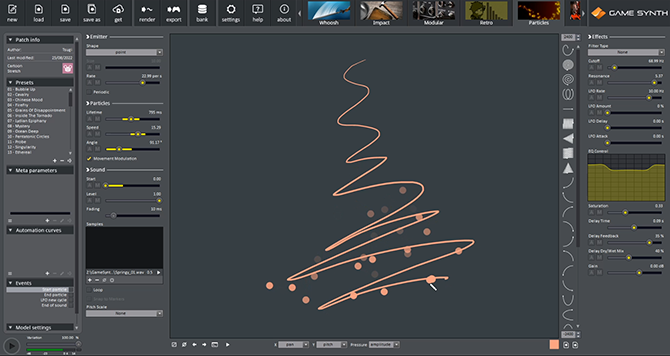 In the second patch, we use 4 samples to create a chord progression. 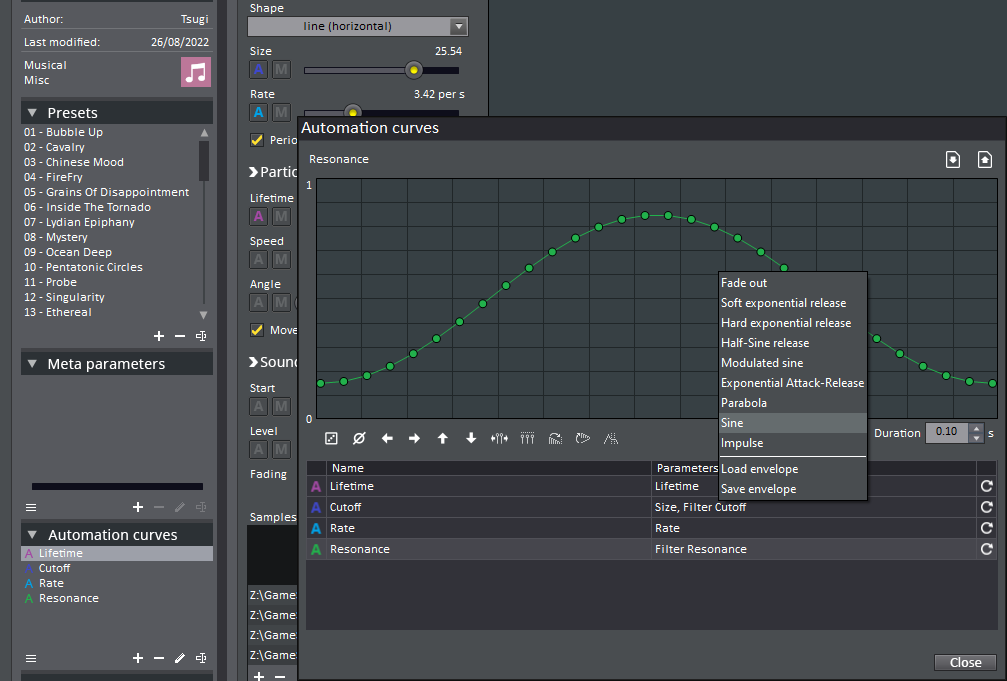 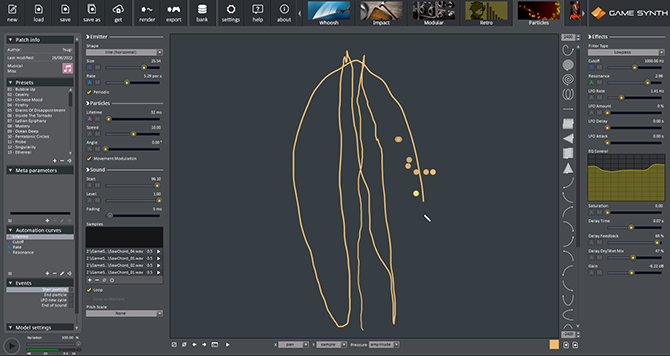 It is possible to import hundreds of audio files in the Particles model, from which the particles’ waveforms will be randomly selected.

By drawing on the Sketch Pad, we are now able to generate an infinite number of sci-fi whooshes with just one stroke!

Tip: using many short samples also offers more control on the particles’ waveform selection process as it is possible to adjust the weight of each sample in the list. 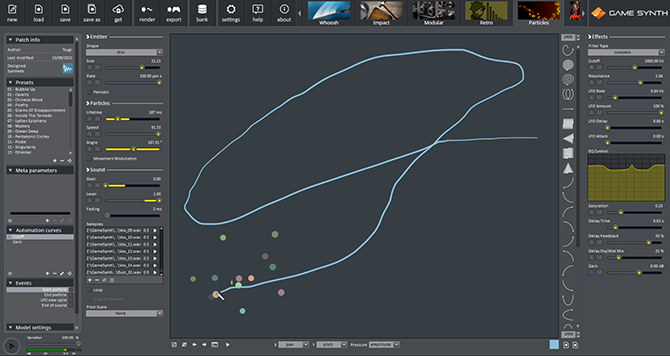 Vocal sounds are always fun to play with using granular synthesis. Here, we import a sample saying “ohayō gozaimasu” – “good morning” in Japanese – with the aim of creating a freeze effect.

Drawing the sample at different speeds or in reverse will generate all kind of vocal effects. Staying on the same spot or moving really slowly will create the freeze effect we were after.

Tip: for more intelligible vocal effects, you can also start the particles’ playback at predefined points in the waveform. To do so, simply place some markers in the wave file in your favorite audio editor, and check the “Snap to Markers” option of the Particles model in GameSynth. 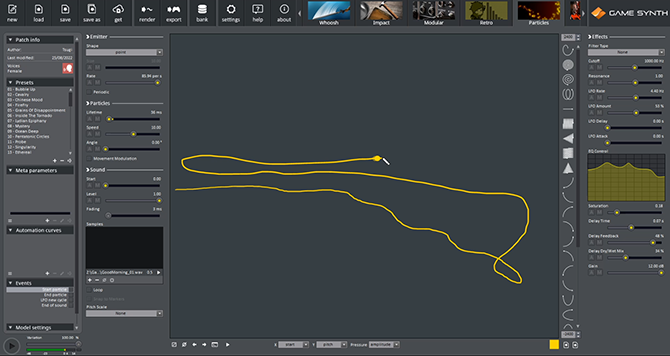 The Particles model is also capable of producing sounds that are more musical in nature. 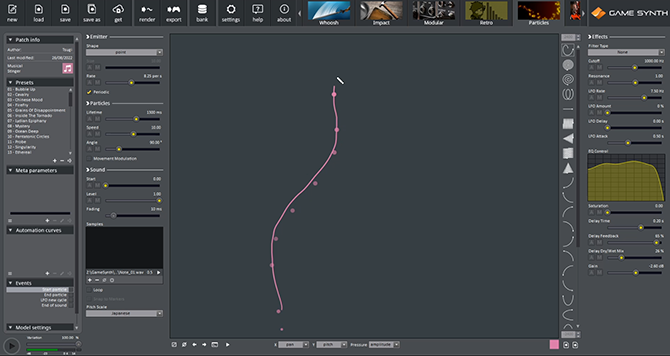