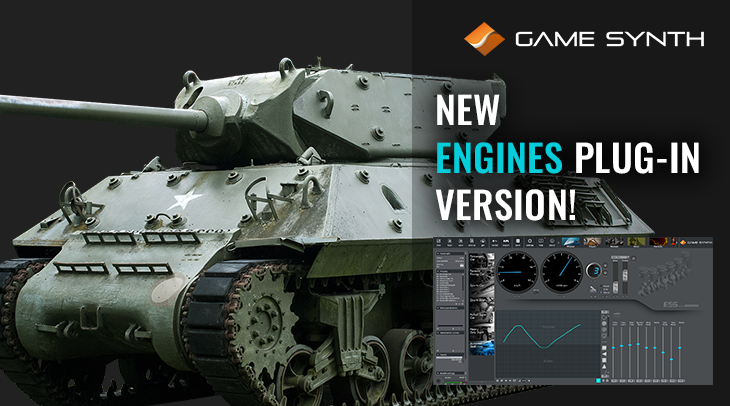 A new version of the GameSynth Engines plug-in has just been released, and as always, it is a free update! The two main features that have been added to this version are the much requested tank models, and the automatic “Pass-by” function. 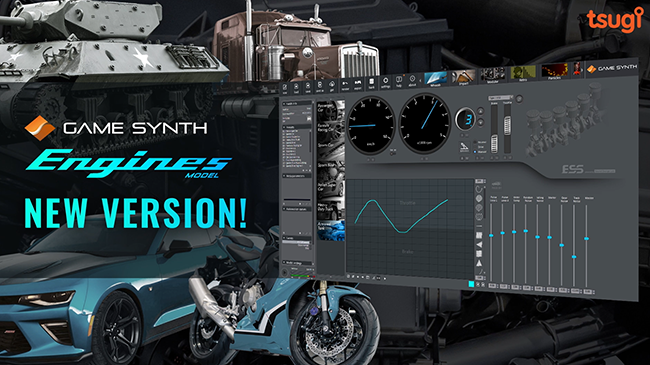 The Engines plug-in is a physically accurate and fully controllable model which generates a great variety of vehicle engine sounds, including sedans, motorbikes, supercars, Formula One cars, heavy trucks, and now… tanks. The new Armored Tank vehicle type offers models based on the T-34/85 and Tiger 1 tanks. More may follow…

Like always, you can generate the sounds you want by driving the tanks with the Engines-plug-in user interface and/or drawing on the Sketch Pad. The mixer section will let you adjust the level of the different components such as gear noise, track noise etc.

Once the Engines patch imported in the Modular model, the possibilities are limitless. The 130+ synthesis modules can be used to generate sci-fi engine sounds for flying cars, spaceships, assault vehicles and more. You can also use them to create talking cars, cartoonish engine sounds and more!

When generating engine sounds, the aim is often to simulate a vehicle driving by. The Engines plug-in now provides a special feature to easily generate this type of sound, by routing the output of the Engines model to the Whoosh model, and allowing you to literally draw a pass-by.

When you press on the “Pass-by” button, two new meta-parameters named Speed and RPM are created with the right control curves, and assigned to the corresponding meters.

The editor then automatically switches to the Whoosh model, where the current Engines patch will be imported as a sound source (other sound sources will be muted, except for a quiet, low frequency deflector). The two newly created meta-parameters will be assigned to the Sketch Pad axes.

A typical pass-by envelope will also be assigned to the main envelope, and the LFO settings will be cleared, so that when drawing with the mouse in the Sketch pad, a convincing vehicle pass-by is produced!