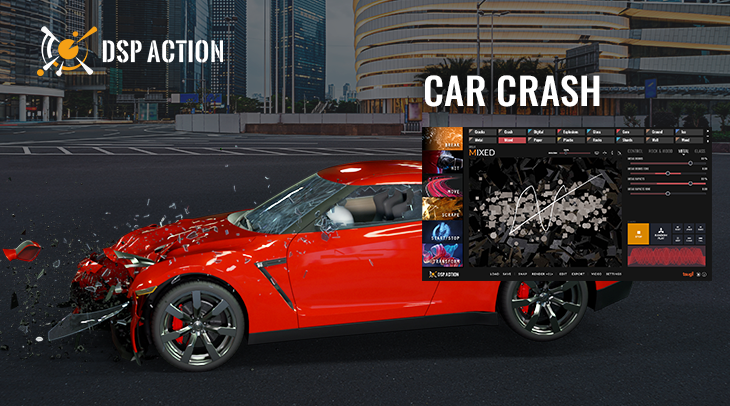 In a previous post, we learned how to generate destruction sounds for a collapsing building, simply by drawing them in DSP Action. This time, we designed the sounds for a car crash, with more focus on the cinematic nature of the effects. First, let’s check the final result. 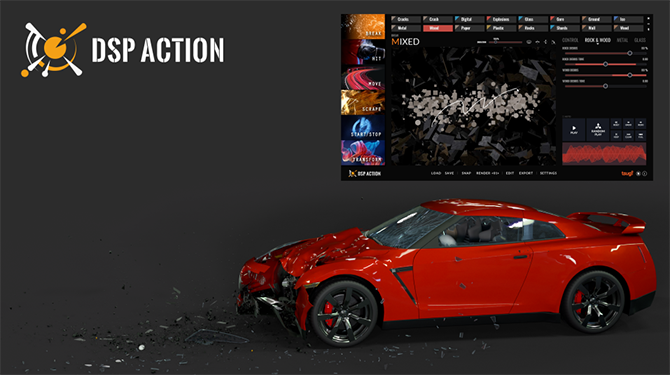 As the sequence starts with the deceleration of the car, the Move-Car patch was unsurprisingly put to contribution, with emphasis on the Exhaust and Ground Friction parameters. We slowly followed the movement of the car until we reach the center of the drawing pad, then quickly came back to the right as it bounced against the wall. It was straightforward to synchronize the movement of the drawing with the video thanks to the integrated movie player.

The Start/Stop-Tire patch was also used for more realism just before the car crashes. To do so, we switched the Pitch Control to Speed. In this mode, the pitch increases as you draw faster, and sound is only produced when the mouse is moving, making it more suitable for short sounds.

In DSP Action, several patches are using the drawing speed to control the sound generation. These patches will provide specific parameters in the Control section such as Speed Sensitivity, allowing you to adjust how the sound reacts to the speed.

Finally, the Start/Stop-Bass Drop patch was used to create a sense of anticipation but also to highlight the slow-motion effect in the video. We slightly increased the level of the Resonances for a fuller sound, and drew downwards until the car hits the wall.

The crash itself is composed of several layers of debris. The first impact combines the Hit-Rock patch for the initial smash and the Break-Crash patch to add some metallic components.

Then comes the glass debris. First, the Break-Shards patch was used to highlight the backlash just after the impact. Its graphic triggers are well adapted to the creation of dense debris. We then switched to the Break-Glass patch, which is best suited for the generation of a sequence of distinct, scattered debris. It was easy to decrease the density of the debris simply by drawing slower and by following the movement of the car.

We used the Metal section of the Break-Mixed patch to design the sound of the car’s body bouncing back. From the second bounce, we also layered the Break-Metal patch. As it is great for small metallic debris, it complements the heavier sound well, by adding lighter elements during the releases of the bounces. 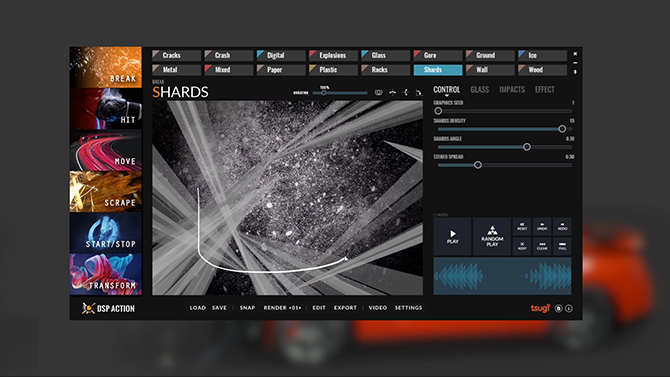 And that is it! As you can see, it is very quick and intuitive to create complex soundscapes for your videos, animations, or games with DSP Action, simply by adjusting the synthesis parameters to your liking and drawing with the mouse!