We are thrilled to announce the release of version 4.0 of Alto Studio, our audio dialogue tool. As always, this is a free update for current users. 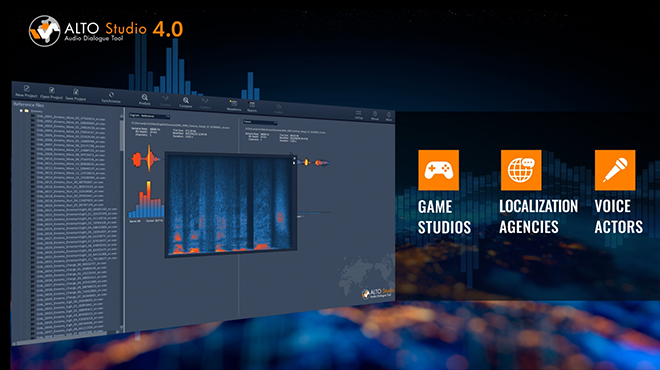 What is Alto Studio?

Alto Studio allows game teams, sound studios, and localization agencies to quickly ensure that thousands of files in a single or multiple languages are well named, have the correct loudness, and that the audio characteristics are consistent between languages and files. Checking and correcting hundreds of thousands of files does not take more than a couple of minutes and full reports and statistics can be generated.

Here are some of the main features that have been added. Please check the release notes for the full list.

Thanks to the new pitch-colored waveforms, it is now possible to immediately understand the differences between refence and localized assets. A male voice and a female voice will have largely different colors, making it obvious that the gender is different. A more subtle overall hue difference will mean that the voices are not in the same range. Local variations will make it easier to spot differences in intonation.

A new spectrogram view is also available when clicking on the average spectrum. It displays the frequencies on the vertical axis, the time on the horizontal axis, with color corresponding to the amplitude and gives a detailed representation of the sound. It can be used to track down clicks and other issues.

FMOD Designer support has finally been retired and a new FMOD Studio importer has been added. (At the time of version 3, support for localized dialogue was not present in FMOD Studio).  The new importer will find any localized audio tables and let you select both the languages and the banks you want to import.

Support for the import from and export to version 3.x of CRI Middleware’s ADX2 is now available, and the tool has also been updated to read and write the most recent Wwise project files.

A new proprietary algorithm allows for the calculation and correction of the integrated loudness of audio files, even when their duration is very short and the original EBU algorithm does not apply.

We received a lot of requests for this, and Alto Studio finally offers a solution to this common issue with audio dialogue in video games.

A strong point of Alto Studio is its ability to integrate in many ways with your game project or build pipeline.

Version 4.0 brings new functions to the command line interface (AltoCLI). First, new analyze and correct functions have been introduced, separating the process in two steps, thus making the tool more flexible. In addition, a check command now gives access to the QuickCheck feature to quickly validate the files in a folder. Two new functions are related to the speech synthesizer:  synthesize generates the placeholder dialogue, while voices lists all the compatible TTS voices installed on a machine. Finally, the new info command displays everything there is to know about an Alto Studio project.

The Alto Studio plug-in SDK also got new commands to set/get the metadata associated with a file, as well as the script information (text, character, actor).

Many other improvements are included in this new version. For instance, we added 8 new effect racks to VoiceFX: Clipper, Comb Filter, Frequency Shifter, Limiter, Resonator, Spectral Delay, Stutter, and Tube.

Do not hesitate to ask us for a trial version, and see by yourself how Alto Studio can help you provide high quality dialogue quickly, and without stress!