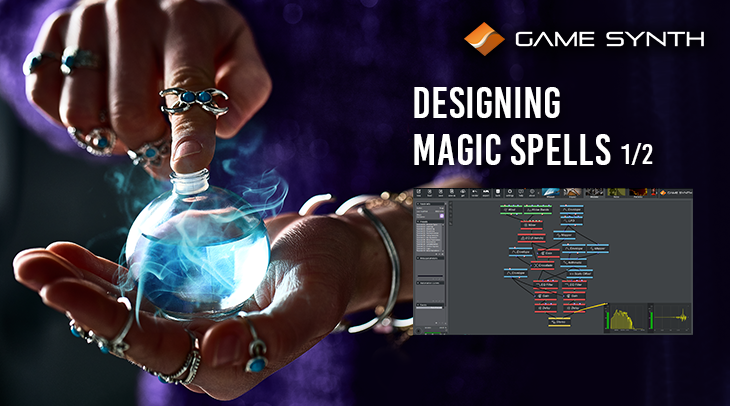 With many unique modules – ranging from ultra-realistic to purely synthetic – the modular synthesizer of GameSynth is the perfect toolbox to create original sound effects for spells, enchantments, and any other magical occurrences.

In the first part of this tutorial, we will focus on elemental magic, creating increasingly elaborate patches by adding control, variations and logic. The second part will see us design other types of spells.

But before we start, here is a small collection of incantations, all designed in GameSynth.

Magic spells often draw their energy from the power of the elements. Luckily, GameSynth provides specialized modules to easily generate fire, wind, water, rock, or electricity sounds, with enough synthesis and control parameters that they can be tailored to your project’s requirements.

With just a few modules we were able to design a powerful magic attack. The structure of this patch can be used as a base for other elemental patches. For instance, the Fire module could be replaced by the Rain or Goo modules to create water spells, or by the Electricity module for electro-magnetic powers.

Tip: You can quickly switch a module for another module of the same type via the ‘Replace’ command of the context menu. If the modules share similar inputs and outputs, their connections to the surrounding modules will be preserved.

No two fireballs should sound exactly the same! Especially in a game, it is important to create sound variations to fight repetitiveness.

The next step is therefore to add more control signals and more variations, like in the aerial patch described below.

Finally, by adding some simple logic, more elaborate spells can be designed, adding for instance an energy charge before casting the spell.

This concludes the first part of our tutorial, which focused on elemental magic. Now that we have the basics covered, we will design other types of incantations in the second part.