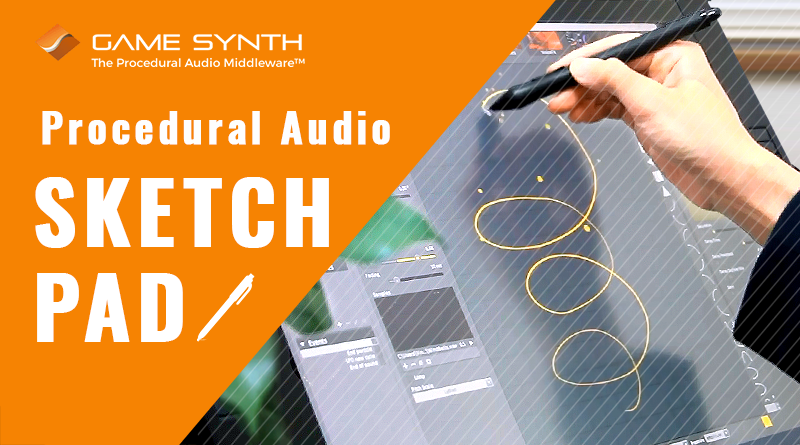 This post describes the Procedural Audio Sketch Pad, one of the many innovations included in GameSynth that make it such a fun and productive game audio tool.

The procedural audio sketch pad allows you to design dynamic sounds very easily and quickly.  It is included in all GameSynth models and its feature set may vary from one to the other. At the most basic level, it behaves like a 2-dimensional pad that allows for the control of several parameters simultaneously, based on the movement of the mouse (position but also speed and acceleration). However, as we will discover below, it can do a lot more than that!

The Sketch Pad records your movements and synthesizes the corresponding sounds in real-time. You can then save the results as WAVE files (of course, you can also generate many sound variations automatically, as always with GameSynth). When using the GameSynth run-time engine, the drawing data can either be used as such or replaced by real-time control values.  Many useful presets are available on the right of the pad. Some of them are visible on the sketch pad of the Retro model below. Note that you can also choose the color of the drawing, randomize the drawing etc.

In addition to working with the mouse, the procedural audio sketch pad of GameSynth supports graphic tablets. In that case, the pressure applied by the pen can also be used to further modify the sound.  For example, in the Whoosh model, the pitch can be mapped to the vertical axis and the pan to the horizontal axis, while the pressure of the pen controls the amplitude. It is therefore possible to design realistic whoosh sounds simply by mimicking the corresponding movements on the sketch pad!

The video below shows several examples of sound design in GameSynth using Wacom tablets. First we generate whooshes with the Intuos Comic, then the Intuos Pro is used to modify vocal effects in real-time, and finally we draw directly on the screen of a Wacom Cintiq to create the sounds of falling rocks and magic spells!

In addition, some models allow the sound designer to load a picture in the background of the sketch pad. In that case, the color of the pixel under the mouse or pen will be analyzed and mapped to a sound parameter of the model. In other words, it is possible to use the color components (red, green, blue, but also hue, brightness or saturation) as modulation sources.

In the Impact / Contact model of GameSynth, the color of the pixels can modulate the characteristics of the contact surface. Coupled with the pressure sensitivity, it offers an incredibly intuitive way to design realistic contact sounds such as scratching, scraping, sliding, rolling etc. with different materials (metal, wood, glass, plastic…)

Although all models use the sketch pad, the Particles model is entirely built around it, which is why it has such a central place in its interface.  In this model, sound grains are emitted when drawing on the sketch pad. These sound particles then move across the screen at different speeds and in different directions.

The combination of the sketch pad controls (position and pressure) and particles movements, both modulating the synthesis parameters (amplitude, pan, pitch, filter, delay, sample start etc.) in real-time makes this model the most intuitive and productive granular tool available today for game and movie production. Browsing through the presets will suffice to convince you of its potential, from realistic debris and to space vehicles and total synthetic madness. Here is a small sample of what it can do…

As you can see, playing with GameSynth’s procedural audio Sketch Pad is very fun, allows for a more expressive sound design, and faster audio creation. So keep an eye on our upcoming model Engines, in which you can use the sketch pad to drive many types of vehicles and generate their sound! 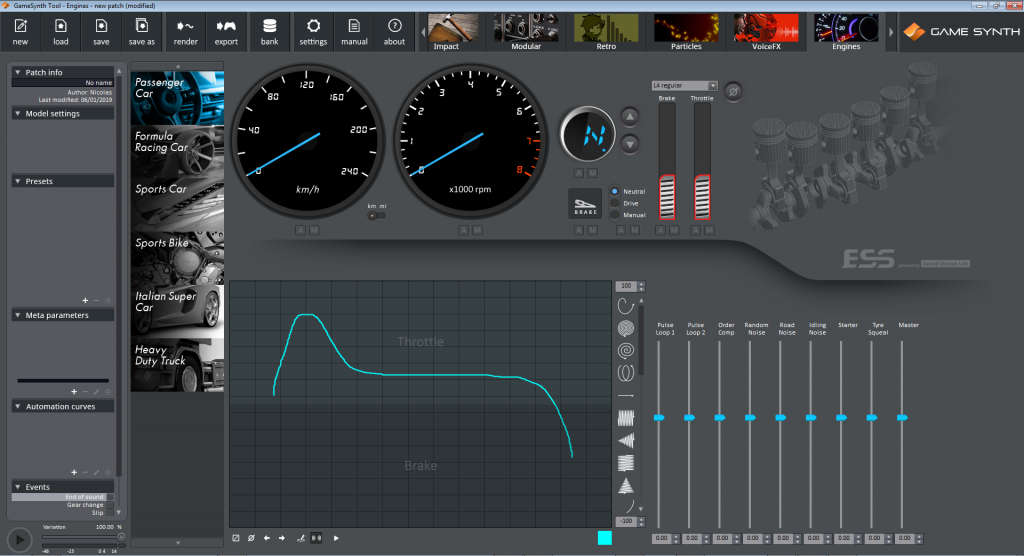