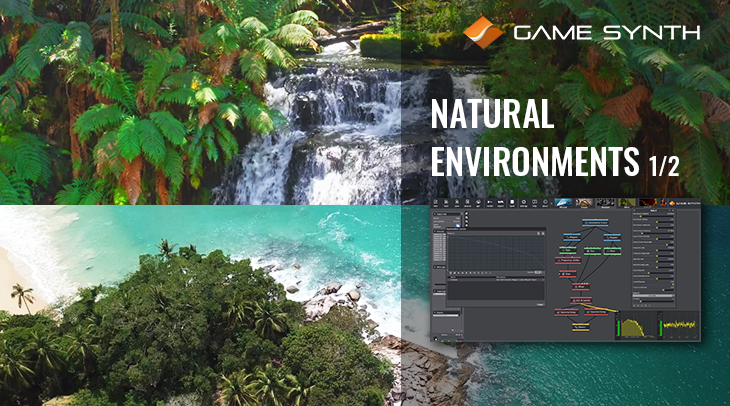 In recent tutorials, we have learned how to design the sounds for a full action sequence – complete with explosions and giant robots – and for medieval weapons, from a simple sword to the mighty catapult!

But GameSynth is equally apt to create the quieter and more organic sounds of natural environments, which will undoubtedly come in handy in many games, animations and videos.

In this two-part tutorial, we will show you how we generated all the sounds in the short video below, entirely procedurally, without using a single sample! 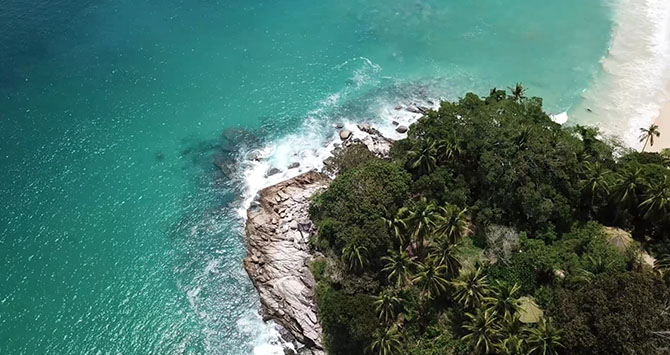 In the GameSynth patching environment, the modules derived from the Weather model, such as Wind, Rain or Leaves are really helpful to design natural ambiences. The video is divided in 4 sections, and we will now describe how we created the background effects for each of them.

Seaside – To simulate the distant movement of the ocean, two Wind generators and one Rain generator are sent through Biquad Filters. Only the Low and Mid layers of the Wind generators are used. For the Rain module, we only set the Far and Close Shower as this is for the general ambience.

To create the wave movements, a looping Automation Curve controls both the Amplitude of the Wind and the Rain, and the Frequency of the filters. The stereo effect is created by using a Scale Offset before one of the Biquad Filter modules to create a slight difference between the 2 channels, while the final Delay modules widen the stereo image.
Procedural audio is especially useful when designing ambiences, as always-evolving sounds of any duration can be generated, without resorting to looping points, crossfades and so on.

Waterfall – Two Rain modules are used as the main generators. A constant wash is created by passing the first one through a Frequency Shifter, while the second one simulates turbulent water with louder and denser Drips settings. An extra Goo module gives more texture. An Automation Curve follows the camera movement and controls the amplitude and density/rate of the Rain modules, making the waterfall sound increasingly distant.

The low and high frequencies of the sound are adjusted with an EQ (5 bands) module. This gives a much louder sound, reinforced by the stereo effect created by a couple of Spectral Delay with slightly different Delay and Amplitude settings.
Adjusting the Amplitude bands of the Spectral Delay is another way to reinforce specific frequencies. 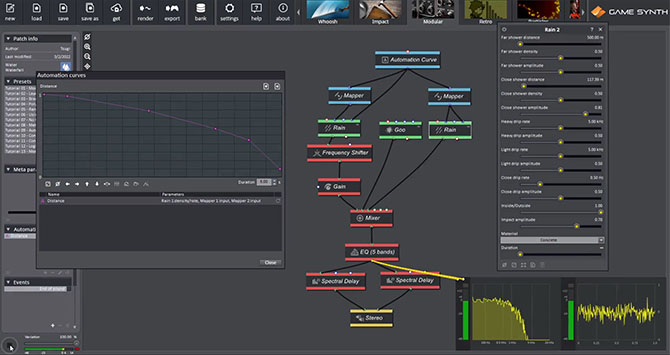 Forest – The base for the forest ambience patch is a Noise Bands module focusing on the 100-200Hz range and using a light Amplitude fluctuation to make the sound feel more natural. The signal then goes through two Reverb modules to add a sense of space.

The Leaves module creates the expected rustling sound. While the module is set to mostly use Close and Small leaves, a Pitch Shifter at -900 cents, as well as a Lowpass Filter to lower the overall frequency range of the sound, set a darker tone for the forest. 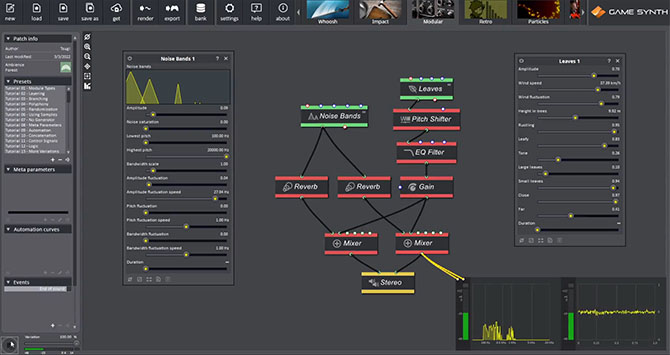 Watering hole – For this quieter soundscape, Rain and Goo are used as sound sources, with the Rate and Density parameters set very low on both modules, in order to simulate slow water movements. A distant rumble – created by a Brownian type of Noise – completes the sound generators.

A couple of Spectral Delay modules with slightly different settings offer a now familiar way to distribute the sound in the stereo field. 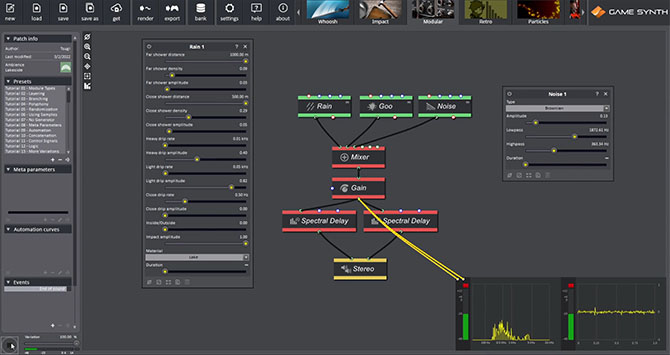 Adding some birds and insects sounds to natural ambiences is a great way to bring them to life.

Seaside – The first bird patch uses the Animal module, which includes a dedicated Bird generator. Its Pitch parameter is modulated by an envelope. The Variation percentage of the Envelope module has been adjusted in order to generate a slightly different sound each time the Clock module triggers the playback. Further down in the signal path, a Chorus adds even more modulation over time.
While several modules can be used to simulate bird songs, fast pitch modulations are the most defining characteristic. By varying the types of modulations, many different bird songs can be created. 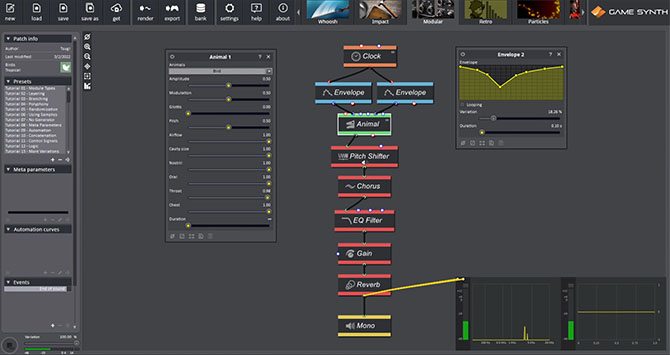 Forest – The next patch used for the forest is actually a simple Sine Oscillator. This time, the pitch modulation is done through a Pitch Shifter, as the modulation goes higher than the frequency range of the oscillator. It is also simpler to change the global pitch afterwards. A SawUp LFO creates the main rhythm, while a Sine LFO – which also control the SawUp Amplitude – will slightly alter the Oscillator Pitch over time. The Perlin Noise on the LFO Pitch adds some fluctuations to the rhythm for a more natural sounding result. 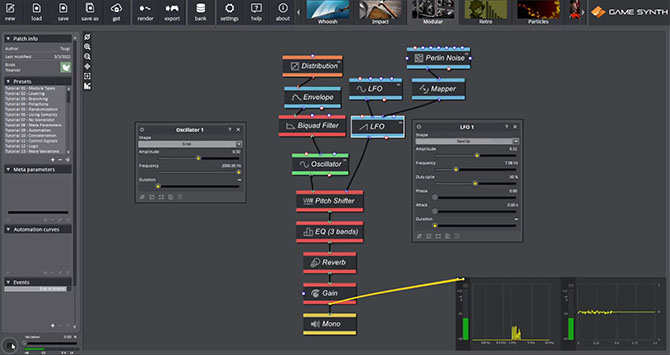 A second bird patch has been created for the forest. Its modulation system is similar to the patch that used the Animal module. However, this time, a Sine Bank module is used as the sound source, generating only a couple of harmonics. By adjusting its Spread parameter, as well as the boundaries of the Mapper module, a large range of sounds can be produced. The rhythm itself comes from an accelerating Clock module. 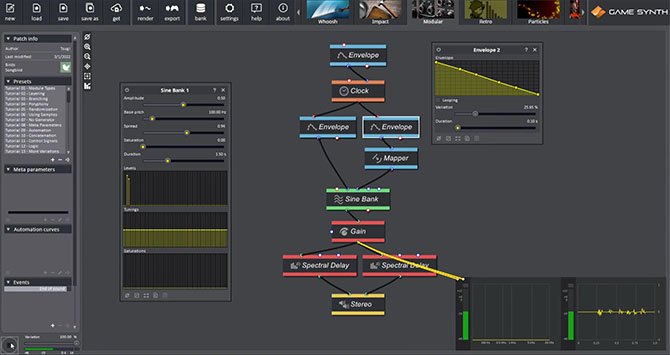 Watering hole – This sequence uses insect patches instead of birds. In the first patch, a Noise Bands module is set up with very narrow Bands in the high frequencies. By modulating the following Gain module with a Triangle LFO set to 30Hz, a nice insect chirp is generated. A second LFO modulates the amplitude of the first one to control the overall volume. It turns out that modulation is equally important when simulating insect buzzing and clicking noises! 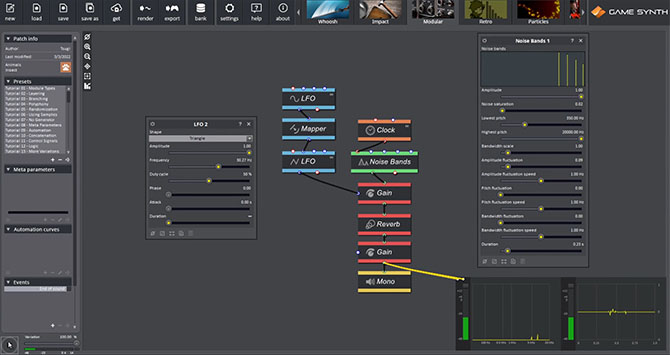 Finally, a Cicadas chorus is created with both a Noise module and a Sine Bank module (which adds modulation in the higher frequencies). However, the main component of this patch is its effects chain. The Flanger, with its Input Highpass set around 4500Hz, already creates the characteristic modulation of an insect chorus. The Spectral Delay smooths the sound, making it sounds less synthetic. Finally, a Lowpass Filter around 5000Hz is applied to remove the mid-range noise that was not necessary. By adjusting the lowpass Frequency (between 4000Hz and 7000Hz), the level of aggressivity of the insect chorus can be changed.

This concludes the first part of our tutorial about the sound design of natural environments with GameSynth. Procedural audio is very convenient to generate ambient sounds of any duration without repetitions, or to easily create almost infinite variations of animal sounds, simply by adjusting a few parameters. In the second part, we will examine how the sounds for the movement of the bigger animals in the video – tiger and crocodile – were created.