This is the last post in our series on procedural sound design for sci-fi games and animations with GameSynth! After designing soundscapes for a futuristic city, a giant fighting robot and a spaceship battle,  it is time to meet some aliens! It will be the perfect opportunity to fire up the VoiceFX and Particles models! But first, let’s check our animation.

Beam me up, Scotty!

At the beginning of the sequence, a female scientist is teleported to a mysterious location in the mountainous desert. Two sounds are played during her materialization; one for the light spiral at her feet and one for the character’s gradual apparition. Both were built in the same way; by designing a patch in the Modular model that is then used as a sound source in the Particles model. 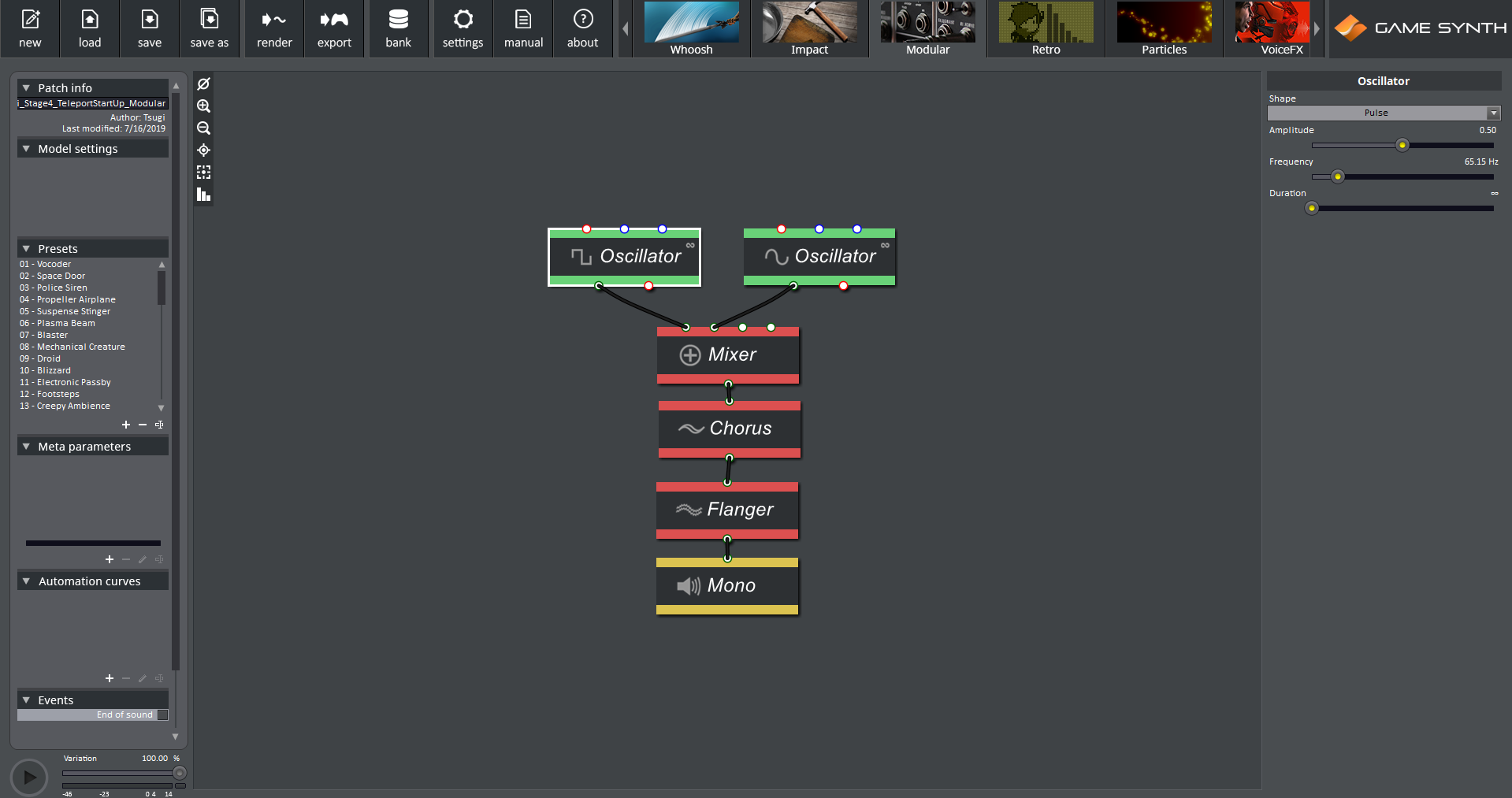 Let’s check the light spiral first. The corresponding Modular patch is based on two detuned oscillators mixed together and sent through a Chorus and a Flanger modules. This leads to a patch generating many harmonics – as well as some beating due to the detuning – which is easily identifiable with an electrical or energetic phenomenon.

Once it is imported in the Particles model, we draw a sound with an ascending pitch, a strong amplitude modulation (using the LFO) and a bit of delay to reinforce the feeling of a light vortex.

For the apparition of the character itself, a lighter, shimmering sound was created. 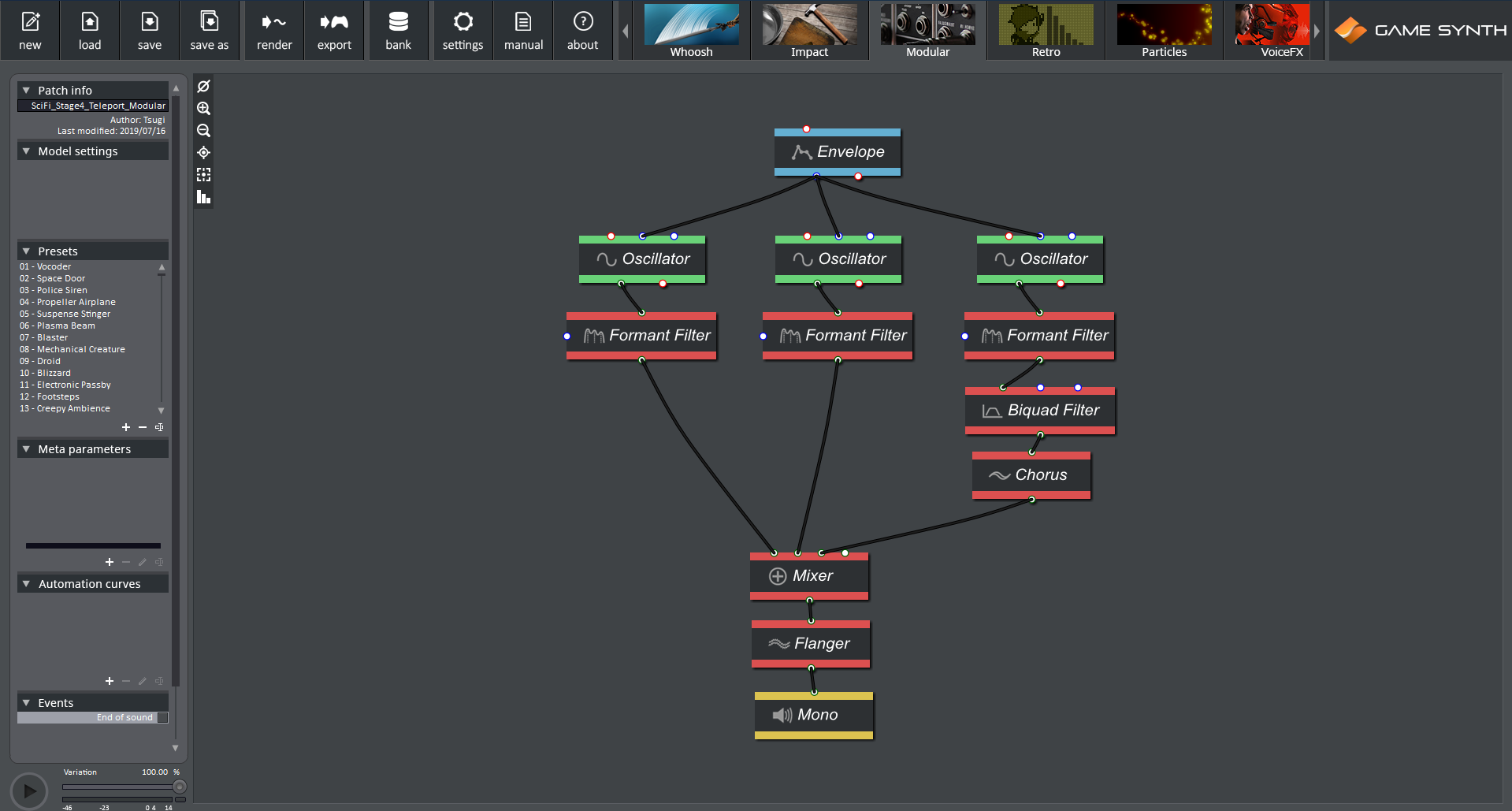 The patch in the Modular sees three Oscillators modules being sent through Formant filters. Flanger and Chorus modules add harmonics and make the sound more “phasey”. The shape of the Envelope – which consists of a short attack, a sustained phase and long release – corresponds well to the sound of an apparition.

Again, once in the Particles model we draw a sound with an ascending pitch. No LFO modulation is applied this time but a lot more particles are emitted, with high speed and in random directions. Since the ”Movement Modulation” option is selected, the pan and pitch of the sonic grains is controlled by the movement of these particles on screen, generating a sound that fits well with the kind of helix-shaped effect we see in the animation.

When the character finally appears, a communication orb materializes in her hand and starts glowing. 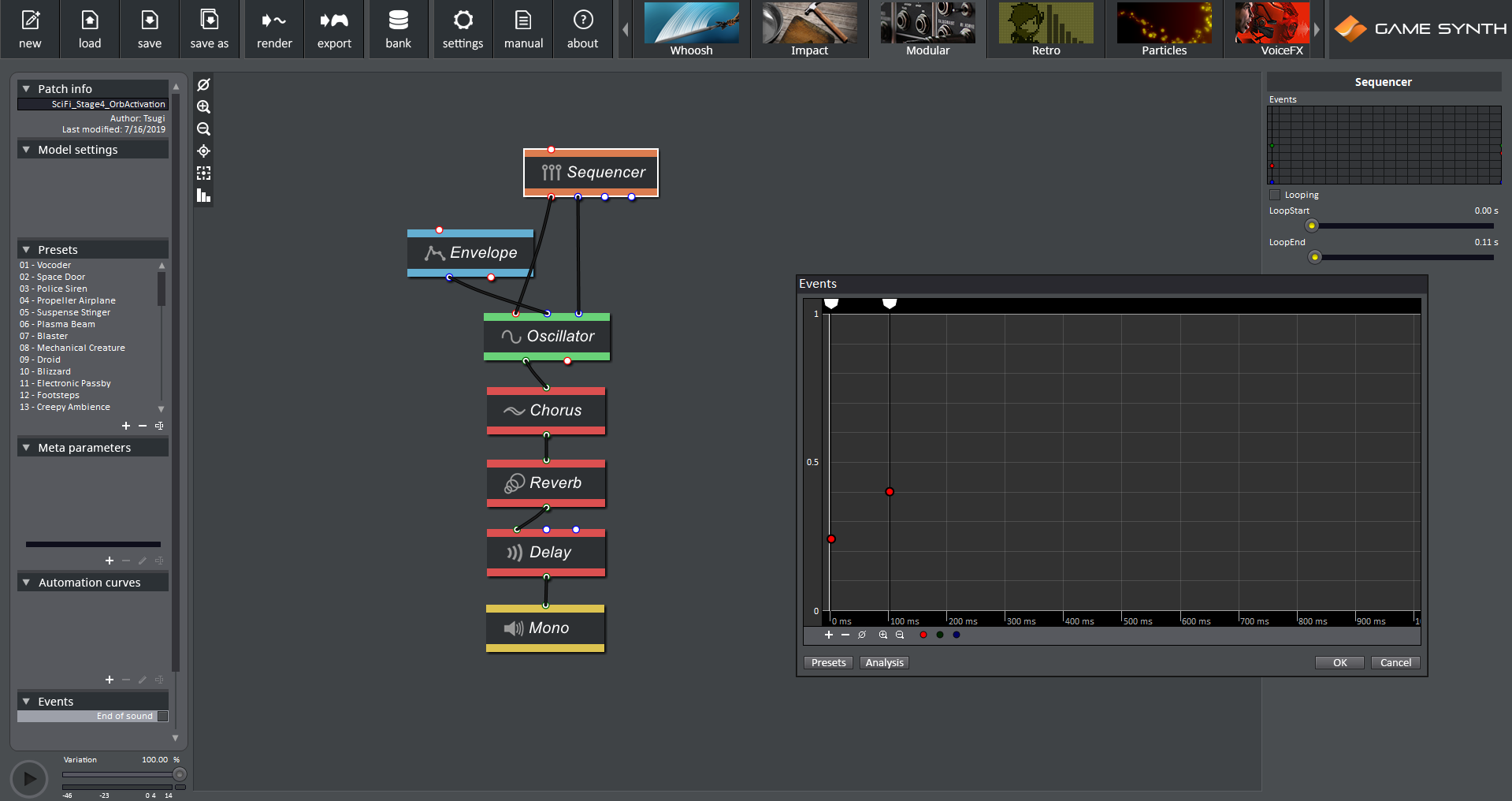 The corresponding sound is generated by a simple two-tone patch made in the Modular model. The tones’ timing and pitch have been edited as events in a Sequencer module and are connected to the trigger and pitch inputs of an oscillator. This is a good way to create small melodic sequences in the Modular model. Several effects Modules then make the patch sound a lot fancier than it really is!

The glowing of the orb signifies the start of our intergalactic conference and, shortly after, two screens appear, floating in the air. 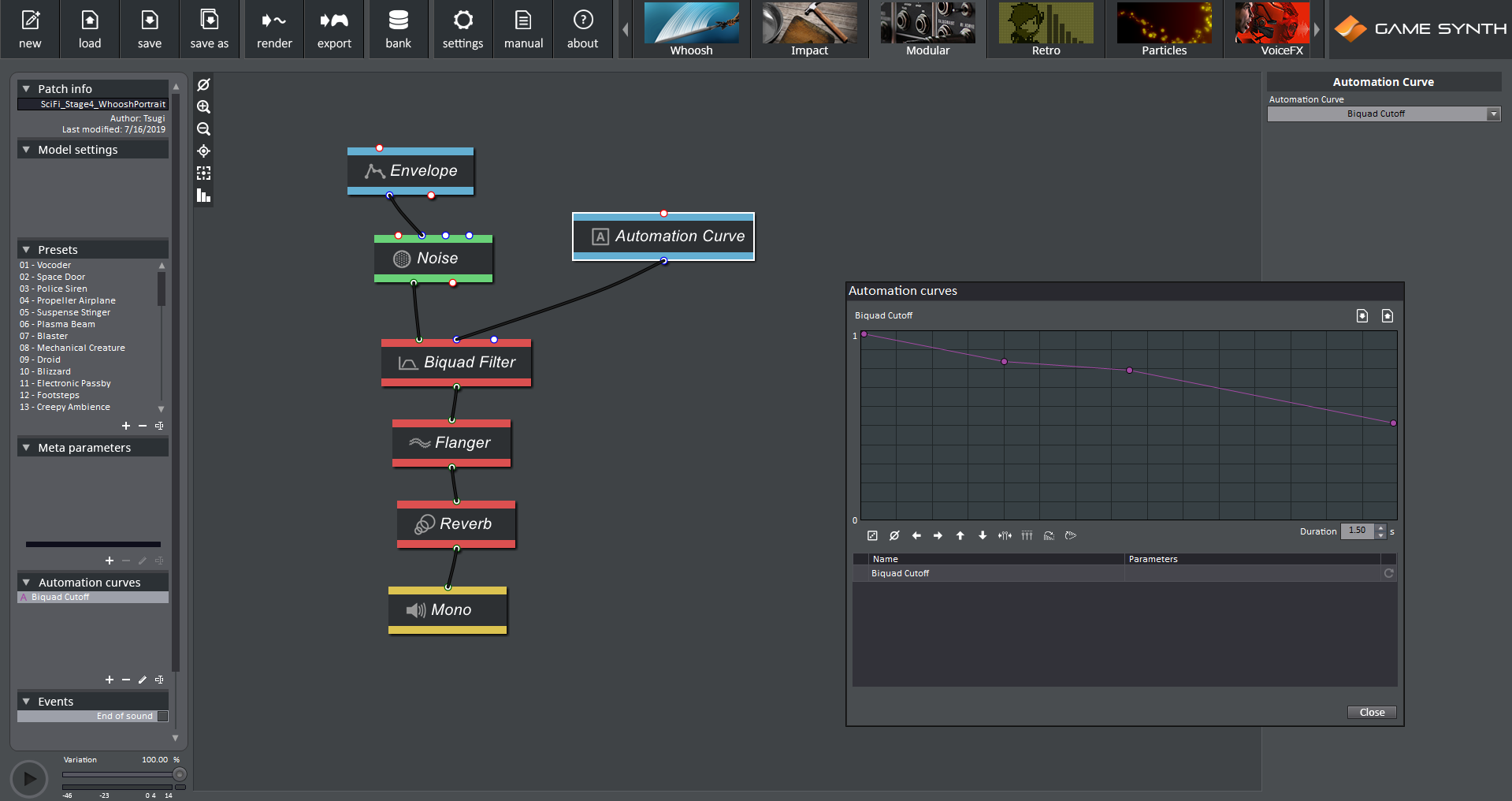 For the whoosh sound accompanying their apparition, we didn’t use the Whoosh model but the Modular. The output of a Noise module is sent to a bandpass filter whose cutoff is progressively brought down by an automation curve. The resulting sound, which has a narrow frequency range, is processed by a Flanger module – which gives it its fluttering character – and then by a Reverb module.

The alien voices are the only assets which are not 100% procedural in this series about procedural audio sound design. Although we could have used Alto Studio’s speech synthesizer to generate the dialogue as we did for the voice of the mecha’s AI, this time our sound designer recorded himself.

We then processed the files in the VoiceFX model, which offers an extensive collection of effects rack, from vocoder and ring modulator to pitch shifter, degrader and many more. There is even a ‘Droid’ rack that can transform your voice into R2-D2 bleeps!

VoiceFX also provides many modulation sources: multi-segment envelopes and LFOs of course, as well as SketchPad X, Y and pressure values, but also curves coming from the amplitude, pitch or noisiness analysis of the input signal. This makes VoiceFX not only a perfect model to design alien, robot and monster voices but also a very creative tool to process other types of sounds, from drum loops to sound effects! 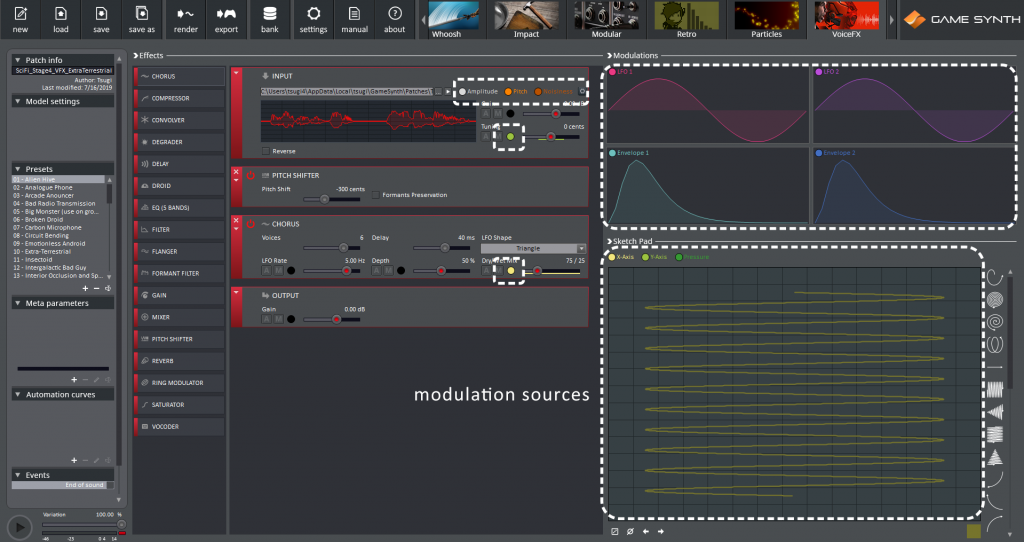 For this animation, both VoiceFX patches host relatively simple effects chains, with no extra modulations. 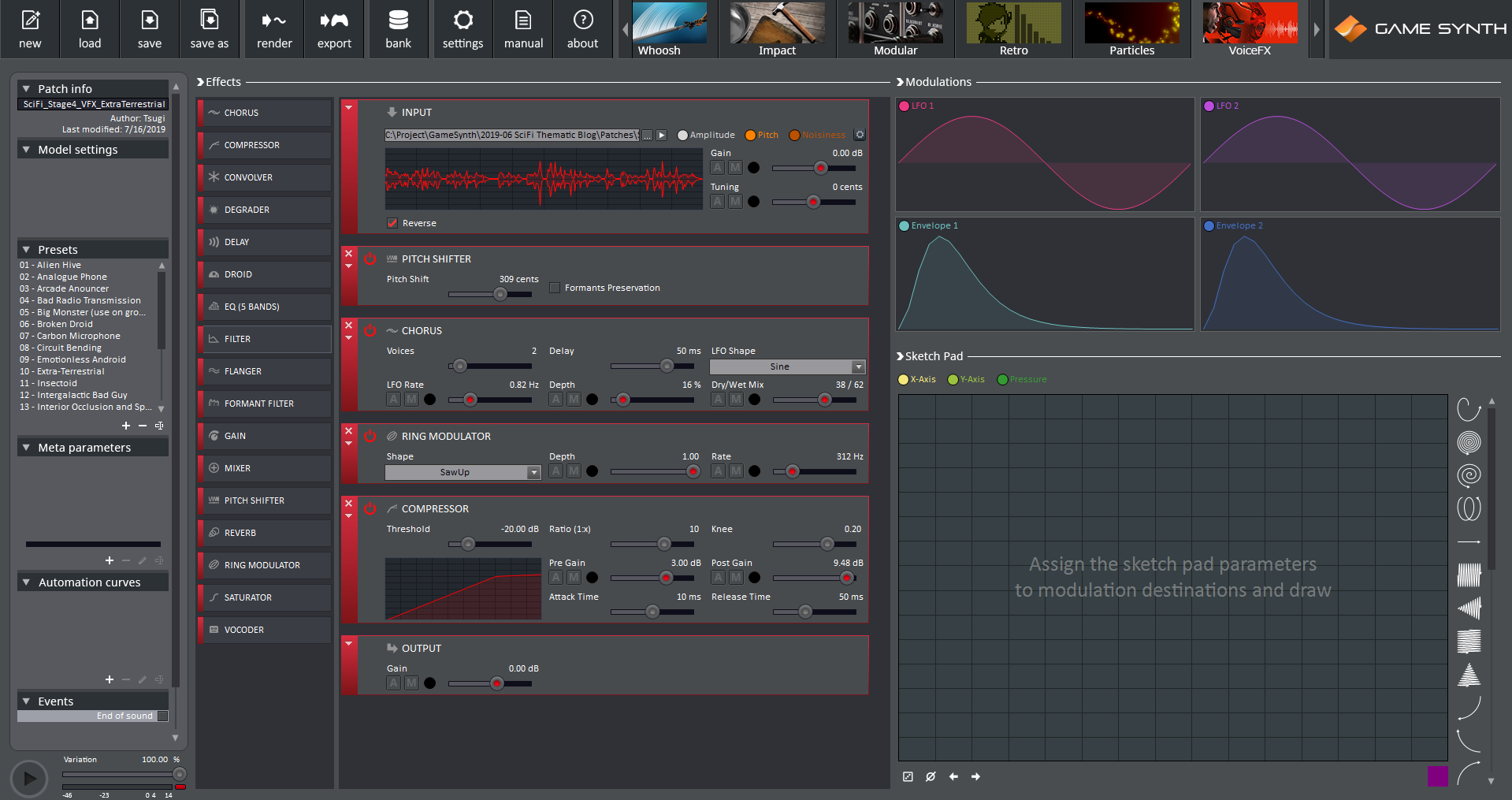 The first one is a slightly edited version of the “Extra-Terrestrial” preset, whose rack chain includes a pitch-shifter, a 2-voice chorus, an aggressive ring modulator and a compressor. It is great to generate the slightly robotic and high-pitched sound of the most evolved alien race. 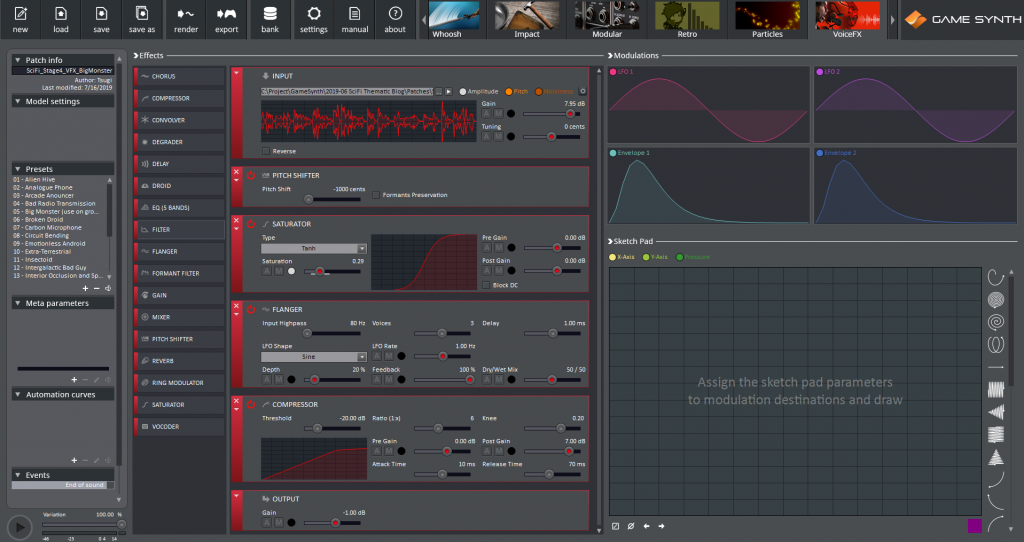 For the second alien race, which looks more primitive, we edited another GameSynth preset: “Big Monster”. The effect chain includes a pitch-shifter, a saturator, a flanger and a compressor, leading to a lower, rougher voice. 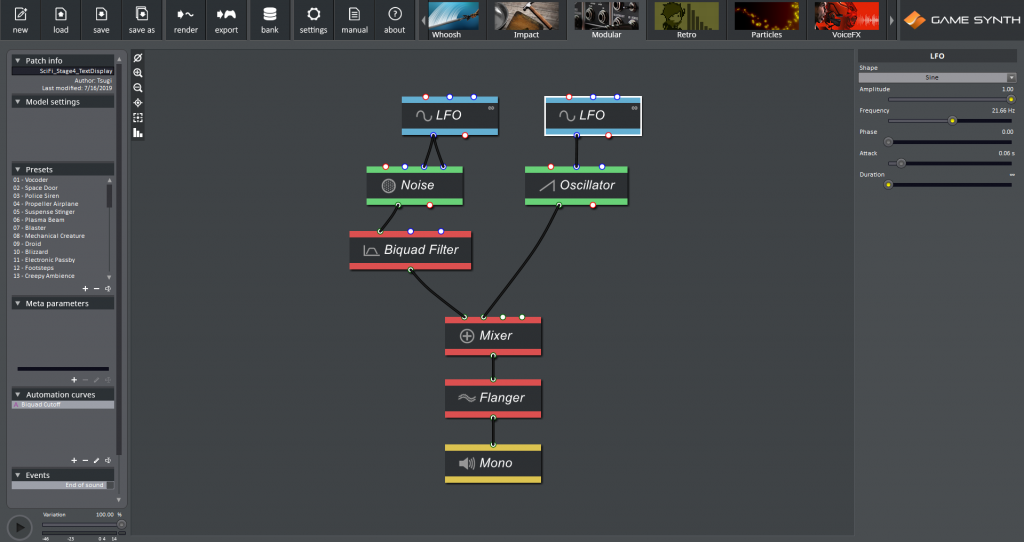 A quick succession of beeps can be heard while the conversation is displayed in glyphs next to the screens. These are generated by modulating an Oscillator in amplitude with an LFO. Another LFO modulates the frequency range of a Noise module used to add a clickety layer to the sound.

An eerie ambiance can be heard in the background during the whole scene. A sustained, glass-like sound was created in the Impact model, with just a few resonant modes. It was then used as a source for the sonic grains of a Particles patch. Once drawn on the Sketch Pad, the combination of all the grains make it sound like a typical synth pad.

Two patches were layered to create the sound of the monoliths once they are illuminated. 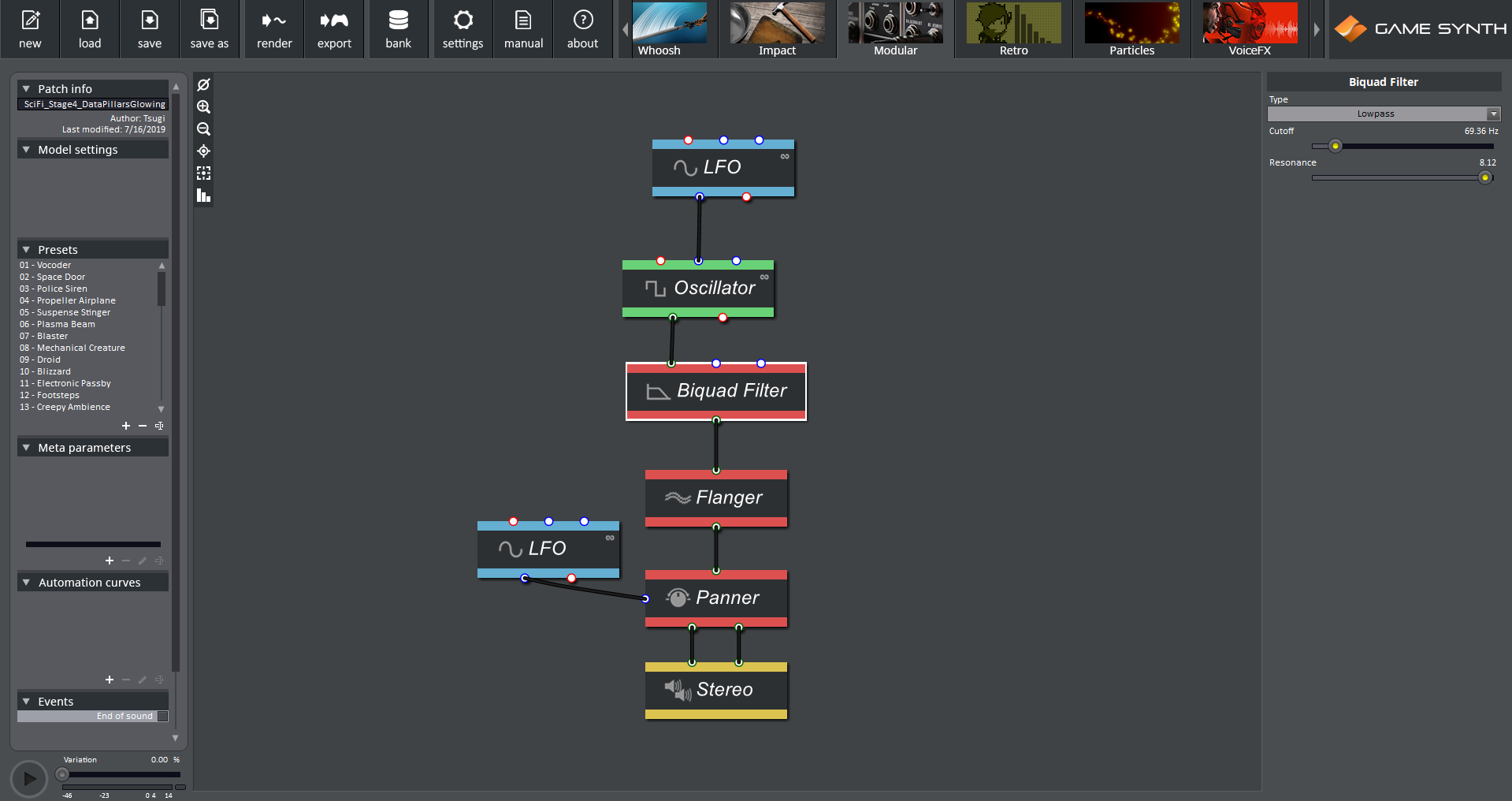 The first one generates a low frequency rumble while the second one creates the shimmering sound corresponding to the lights. The rumble sound was designed in the Modular model. It is a very simple patch in which the amplitude of a pulse oscillator is slowly modulated by an LFO, while another LFO controls the panning.

To create the sound of the lights appearing on the monoliths, we reused the same glass-like impact sound as for the eerie ambiance but in a different Particles patch. In this new patch, particles are emitted much faster and with a higher pitch. It’s always great to reuse assets, even if they are very small procedural audio patches!

This concludes our series on the design of sci-fi sound effects with GameSynth. In the span of these 4 posts, we have created a large palette of sounds characteristic of this genre, using many of the procedural audio models available in GameSynth. Between aliens, spaceships, explosions, laser beams, robots and UI sound effects, it is possible to design the audio of a whole sci-fi game or animation entirely procedurally, with all the advantages that this offers; more interactive audio, easy generation of variations, and ultralow memory footprint among others. 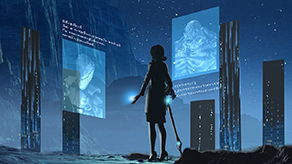 As always, you can download all the patches we built for this post’s animation below:
DOWNLOAD ALL PATCHES
These patches require GameSynth 2019.1 or higher.
In addition, they will all be added to the GameSynth  online patch repository shortly.

We hope that this series has inspired you to explore the many sound design features of GameSynth. Let us know if this type of posts is useful to you and what topics would be the most interesting!

These sci-fi blogs have been produced by Axel Speller, senior sound designer at Tsugi, and Shintaro Takemoto, our art director.