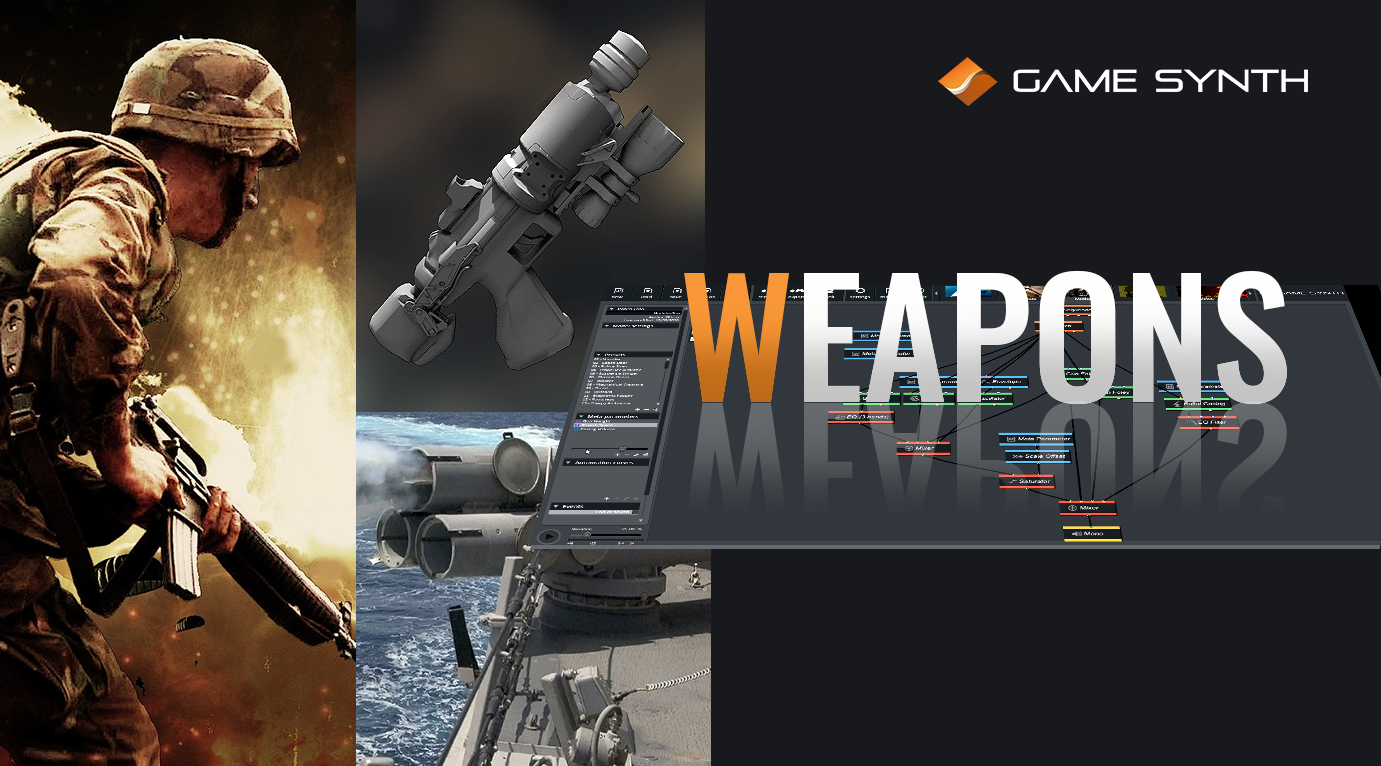 Gunshot is used to design the loud discharge of a firearm. In this module, we can shape the color of the sound with parameters such as Explosives, Blast Radius, Resonance, Tone, and Saturation. Experimenting with these settings will allow us to define the weight and character of our shots. Distance and Reverberation can be used to great effect when designing sounds which change over distance.

Gun Foley offers us a selection of gun handling sounds such as reloading and shotgun-style pumping. The character of each of these can be further customized via the Pitch Shift, Metallic, and Force sliders. The Speed of the sounding action can also be adjusted to better synchronize with animation.

Finally, we have the Bullet Casing module. With this, we can add the sound of spent ammo for several different round types. The controls for this module allow us to set how bouncy our rounds are (Elasticity), and how quickly they bounce (Acceleration).

Using the 3 modules mentioned above, we have created a modular sidearm. Gunshot, Clang (another new module), and Oscillator give us the weight of our sound. These can all be customized by themselves, but some additional EQ, Compression, and Saturation help to beef everything up.

Linking a Sequencer to a Switch allows us to control the offset of our 3 components. This offset prevents simultaneous playback from becoming a single smeared impulse. This approach can be further emphasized with the Initial Delay setting on each of the weapon modules, with some added randomization to allow a good spread of variations on each playback.

The Gun Foley and Bullet Casing parts help give the sound it’s character and imply the weapon’s type and size. Swapping one of the Gun Foley Type settings for “Pump” and the Bullet Casing Cartridge for “shotgun” turns the patch into something resembling a pump-action shotgun. Of course, the weighty part of the patch will need to be tweaked to match the more explosive sound of a shotgun, but it’s a good start!

Finally, we can decide on any arbitrary configuration of Meta Parameters to give our patch some flexible control. We have decided to hook up a “Gun Weight” parameter to the Saturation of the Gunshot, and Impact of the Clang. This parameter can then be quickly used to create different tonal options without having to hard-code values in each module.

And if we make creative use of the other modules in GameSynth, we can even simulate the sound of big weapons. In the example below, we have created the sound of a rocket launcher by adding Thunder and Steam modules.

Much like the sound it produces, the following patch doesn’t have much basis in reality. Three sound generators make up the weight of this patch. We have another Gunshot, a fast-repeating enveloped Blip, and some Noise Bands sweeps. The Doppler processors are being used to change the pitch over time, creating that distinct “pew” sound. Noise Bands is another new module, which is roughly similar to the Deflectors section of the Whoosh Model. However, the added granular control afforded by Modular offers endless sound design potential.

Most of the processing is simply a matter of shaping and adjusting everything to sit just right, with liberal use of Saturators to make it sound loud. The notable exception to this is the Degrader module, which is being used as a sound design tool. The Decimation slider causes heavy aliasing, resulting in a gritty digital mess (which sounds great!).

Our final neat trick is a Gain slider acting as an envelope for our whole patch. Two Envelopes have the same shape but are set to 1.5 seconds and 7 seconds, respectively. Then, a Lerp module controls the ration between these envelopes, based on the input of a Meta Parameter. The result is an easy to use slider which can quickly change the length of the final sound. When set to 1, we get a powerful rifle, and when set to 0, we get something closer to a laser pistol.

As an extra tip, the mechanical nature of the Gun Foley module makes it a great candidate for UI sounds. Below we have two examples of clicky interaction sounds that could slot into all sorts of games.