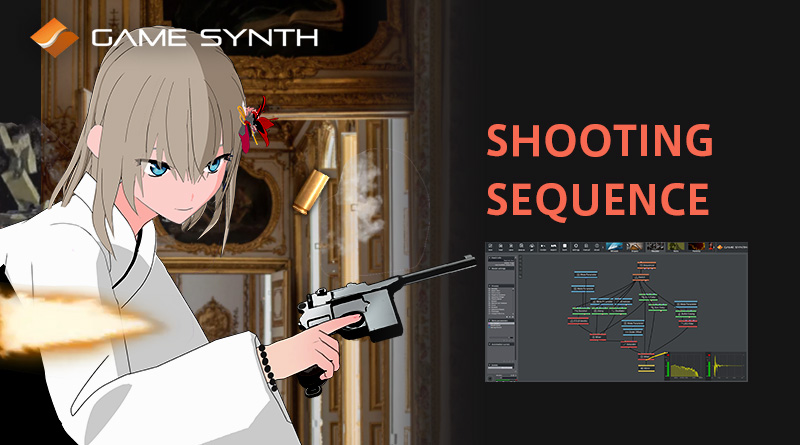 Whether you are developing a AAA action game or a retro pixel art shooter, the weapon sounds are of primordial importance as they give immediate feedback about the player’s actions.

GameSynth provides several sound modules to create realistic firearm sounds. They can generate gunshots of course, but also the sounds of the reloading, of the ejection of the bullet casings etc.

In this post, I will show how I used these modules to add sound to a shooting animation. It is part of a small pixel art horror game developed with RPG Maker. You can read about some other sounds I designed for that project here: Old-Style Elevator and Japanese Horror Soundscape.

Gunshots in the corridor

Browsing the GameSynth patch repository is a great way to quickly and easily add sounds that fit well with your game, even if you don’t have an extensive audio knowledge. You can enter keywords to refine your search, select the patch that is the closest to what you want, adjust its parameters to fit your game style, and generate a wave file to add to your project.

For the gunshots, since it is an indoor horror game, I wanted something realistic and not too overpowering. Searching for “gun” in the online patch repository, I found several candidates and opted for the patch called “Realistic_Gun”.

If you download this modular patch, you will see that it already includes GunShot, Gun Foley, and Bullet Casing modules, thus taking care of the whole firing sequence. The amount of gunpowder used and the room reverberation can also easily be adjusted as they are exposed as meta-parameters.

In addition, I assigned random ranges to some of the parameters of the GunShot module (they appear in yellow on the screenshot). Therefore, the sound will be slightly different each time it is played. 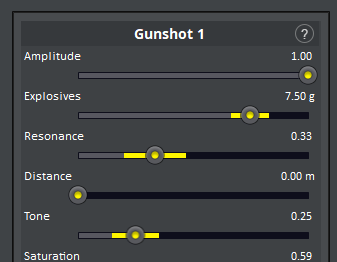 By exporting 10 variations of the gunshot as wave files and selecting one randomly when the player fires the gun, we can avoid audio repetitiveness in the game and achieve a more natural feeling. It is probably better to stick with subtle random ranges like I did, unless you want to simulate a really lousy and unreliable gun!

Fastest draw in the West

I also added a Foley sound effect when the gun is taken out and put back in its holster. You would probably not hear that sound so much in reality, but for the purpose of the game, I decided to make it a bit more dramatic.

To do that, I used the Whoosh model to generate a noisy whoosh sound. It is then loaded in a Modular via a Patch Player module. A small mechanical sound is also generated by a Gun Foley module.

I used 2 Time Shifter modules to sequence the whooshes (when taking out the gun and putting it back) and the gun sound. It made it easier to adjust the timing to perfectly match my animation.

I also prepared some sound effects in case the player misses the target and starts shooting at the furniture! Even if you don’t want to prepare specific graphics or animations for all the objects that can be hit, the audio feedback alone will often be enough to convey the poor accuracy of a shot!

I created the ricochet sounds on the bronze statue and painting frame using the ideas introduced in the Debris Generator blog. For the mirror impact sound, I used the “Breaking Glass” preset of the Modular model. You can download all these patches at the bottom of this page.

This was an example from a simple, personal game project. Even though the style is pixel art, and the graphics are a far cry from recent high-end productions, I feel that the appropriate sound effects can help immerse the player in the game and convincingly relay information. Therefore, I encourage indie developers to explore the possibilities that a procedural audio tool such as GameSynth offers to improve the story telling or player feedback in their game.