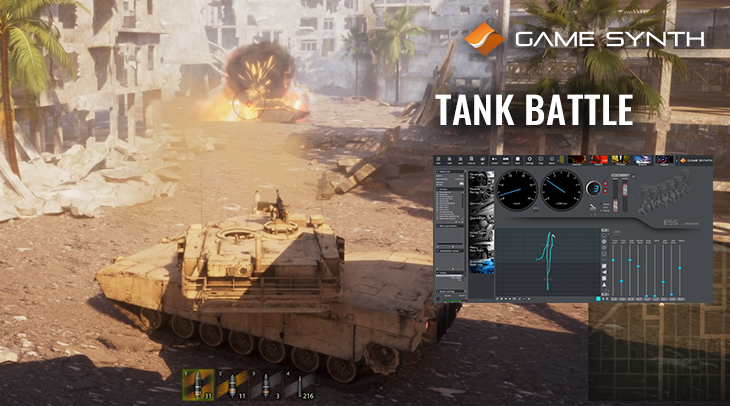 The latest version of the GameSynth Engines plug-in comes with a new Tank model. In this post, we will combine it with patches created in the modular environment (turret, cannon, explosion…) to design the soundscape of a tank battle, as shown below.

We are now ready to drive. The vehicles of the Engines plug-in are fully controllable, simply by “driving” them on the Sketch Pad. It is especially convenient when following the movement of a vehicle in a movie. In just a couple of attempts, we were able to make the sound for the whole sequence in a single drawing, all in sync with the video.

While drawing, it is possible to use keyboard shortcuts to shift gears. Use Q and A to shift a gear up or down, respectively. 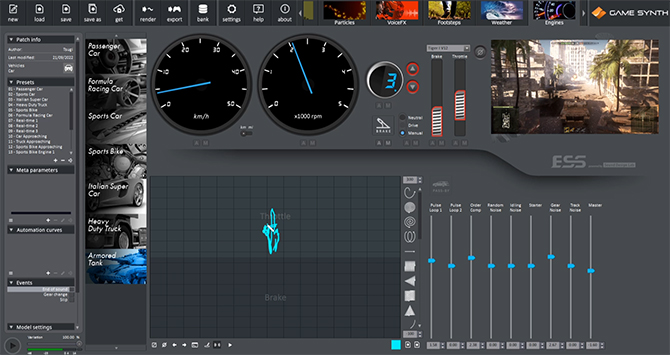 A second patch – using the same vehicle type – was used to create short sound variations of the engine revving up. It is put to contribution when we need a bit more aggressiveness (e.g., when the tank climbs over a wreck, or restarts after shooting the other tank). The tank parameters in the Mixer panel were modified to put the emphasis on the cylinders and complement the previous sound:

Several rev up sounds were produced by drawing on the Sketch Pad. By switching to a higher gear, it was easy to create smoother acceleration sounds. 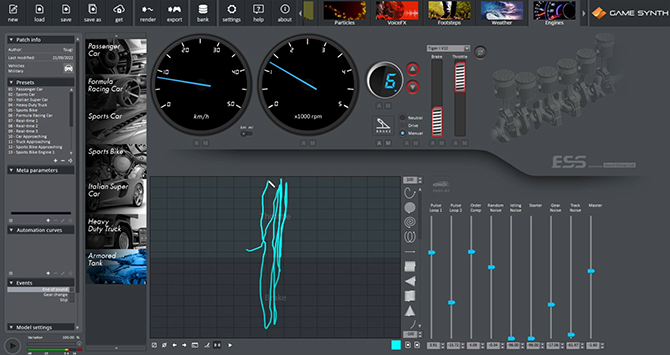 Although the enemy tank only appears briefly, it has its own sound:

We are done with the Engines plug-in. Let’s now switch to the Modular model to design the remaining sounds.

Let’s start by designing the sound of the turret rotating.

A variation of this patch was used for the second rotation of the turret:

It may become cumbersome to change the global duration of a patch as more generators and control signals are added, and must be adjusted individually. The Match durations function of the context menu will allow you to change the duration of all the selected modules at once.

Three different patches were used for the cannon shot. The first one focuses on the mechanical aspect:

The detonation is produced by the second patch:

The final patch is a fast whoosh simulating the explosive shell passing by before hitting its target: 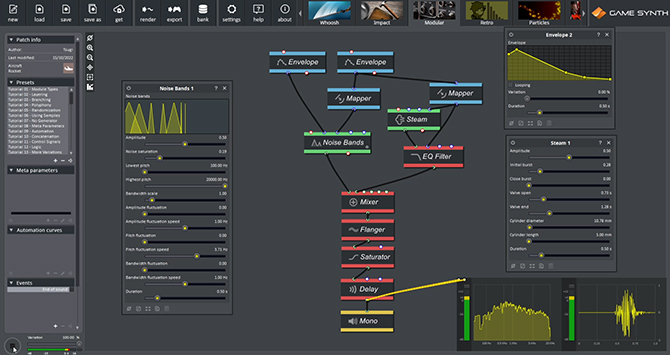 For the sounds of the explosions and debris resulting from the shots, we relied on the extensive collection of procedural patches in the GameSynth Repository, adapting them to our needs. For instance, we used one part of the Explosion patch, simply adjusting the “distance” meta-parameter for the two explosions occurring in the video.

The repository contains 1000+ procedural audio models. If you want to create a new model but don’t know exactly where to start, you can drop a similar audio file on its window, and the 8 closest models will be listed, giving you a lot of patching ideas!

The different types of debris use patches like Tree Impact, Metal Box Falling, Dumpster Impact or Meteor Impact from the Repository. For more information, check out our action blog, in which we covered the design of these types of sounds extensively.

The same goes for environmental sounds. The fire from the burning cars was based on the Fireplace patch, with an added component for the smoke coming from the Flowing Sand patch. Finally, when the tank rolls over the destroyed car at the beginning of the sequence, we mixed several variations generated by the Thunder Sheet and Steel Tension patches.

To learn more about each patch, you can download them below.