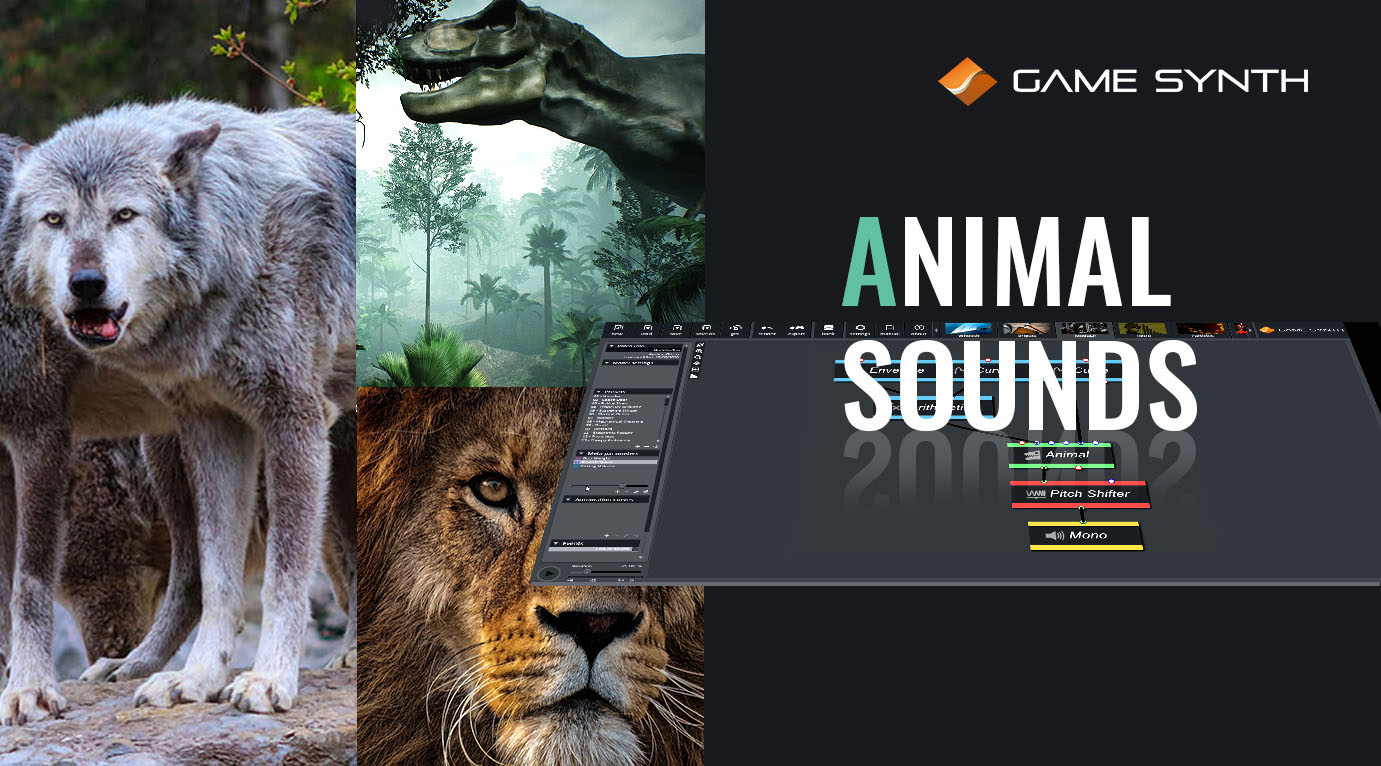 In version 2020.1, GameSynth welcomed the source module Animal, and the logic module Gait, which allows us to create and trigger new types of animal interactions. 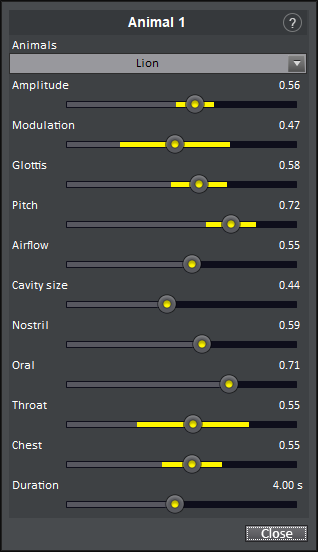 Despite being the only new generator in this category, Animal is packed with features. In the Animals dropdown, a variety of animals can be selected, from an imposing Lion or Bear to a small Bird or Bat. Glottis controls the shape of our waveform, with lower values producing a softer rounded sound, and higher values generating a more abrasive saturated sound. Cavity size, Nostril, Oral, Throat, and Chest all work as intuitive sliders to control the distinct size and shape of the generator. These ostensibly filter our sound, with Nostril and Oral affecting the higher frequencies, and Throat and Chest altering the lower frequencies. And finally, Airflow controls the force of the air pushing through, with higher values giving more of a roar. 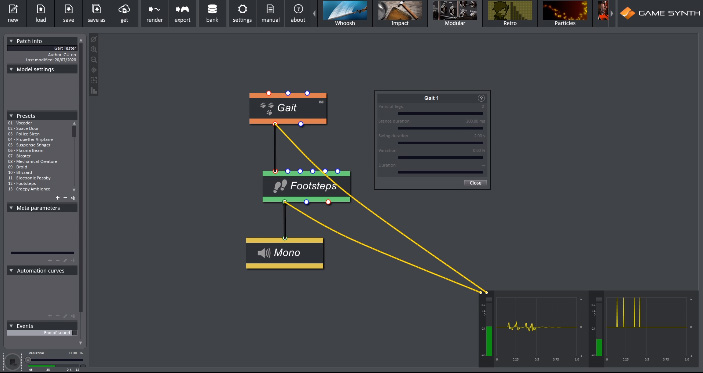 Gait provides us an easy way to trigger footfalls rhythmically. We can define the number of Pairs of legs via a slider, up to 10! The Stance duration sets the timing between each pair of legs, and Swing duration controls the timing between each set of leg pairs. To understand this better, listen to the patch above to hear the difference in parameter changes. We can further add natural timing variance via the Variation slider and set the total span of the interaction via the Duration slider.

The Creature module has also been updated to include a Vocalization slider to offer some variation in utterances. 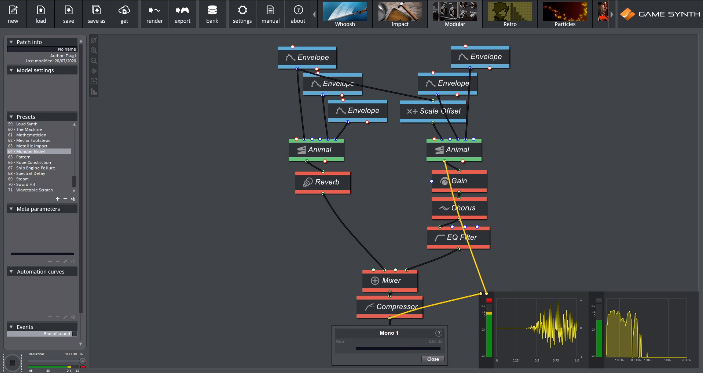 This patch uses two Animal modules to create an imposing monster roar. On the left, several envelopes are used to shape and finesse the high-frequency portion of the sound, with some Reverb to blend it with the right. On the right, the process is similar, but the addition of Chorus and EQ Filter form more of a billowing growl. The Animals type differ between each, with Troll on the left and Lion on the right. Using different combinations of Animal sources in this way can quickly produce a rich result. For added punch and creative tweaking, the rendered audio can be further processed through the VoiceFX model. 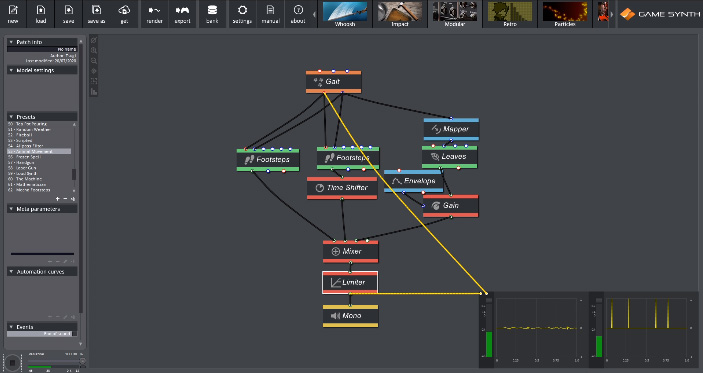 This patch is made of a mix of Footsteps and Leaves, with only minimal processing. Much like with the Monster Growl, two of the same modules are used to produce a fuller sound. Various parameters are tweaked and randomized, on top using different Shoes and Surfaces types. A Time Shifter is then used to stagger the offset between the separate footstep components. The main feature of this patch, however, is the Gait module. This module triggers the footfalls in a rhythmic canter, which helps to contextualize our sound. 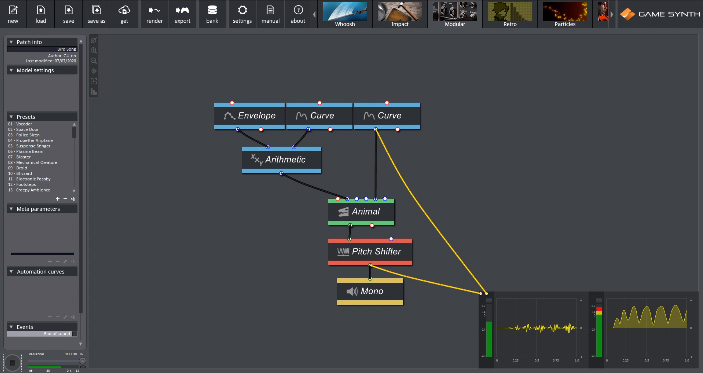 Besides creating monsters and beasts, Animals can also be used to create small chirpy birds. In the simple example below, the Animals type is set to Bird, with low values on the noisier throaty parameters more characteristic of larger animals. Then, sampled birdsong is used with the Curve envelope, which can extract information from a waveform to be used as a control signal. This module allows us to capture the natural cadence of real birds easily, but with the flexibility of sound shaping, that synthesis affords us. To better control the cutoff point, we can use the new Arithmetic module set to Multiply, with an Envelope that steeply rolls off after whenever we want to shorten our Curve (hovering over a point will display time in seconds at that point). 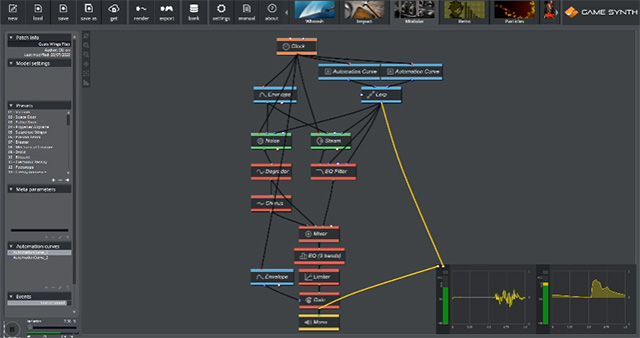 Of course, these new Animal modules mostly work as a starting point or guideline. They can be used in any other kind of patch, as much as other modules can be used to create creature sounds. In this example, we have the gusty wing flap of a giant mythical creature. Noise and Steam offer a rich, layered bed of audio which are being formed and shaped by various Envelopes and Curves. Several forms of audio processing then add a final touch of weight and cohesion to our sound.