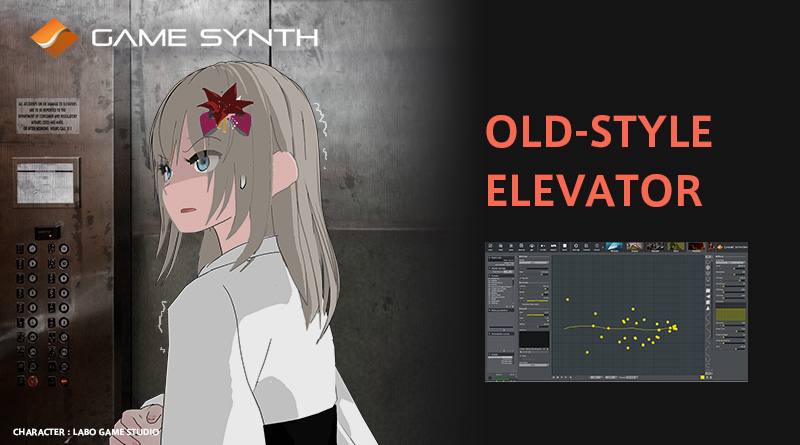 In games and anime, we often introduce new and original machines such as spaceships and robots, which offer a lot of potential for creative sound design and sound synthesis. However, when tasked with simulating the sound of real machinery, it is tempting to rely on recordings.

Unfortunately, it is often difficult as these recordings need to be processed to match both the style of the project and the timing of a sequence, potentially introducing audio artefacts. I met this exact issue on the horror game I’m currently developing with RPG Maker. Not only did I need an old-style elevator sound effect, but it had to synchronize precisely with my game sequence.

This post describes how I was able to generate exactly the sound I wanted with GameSynth, and to do it very quickly by making some of the presets my own, by adapting them to my needs. The result is shown in the video below.

Because you can do so many things in GameSynth, it can be a bit intimidating. Luckily, there are also several ways to get inspiration, such as the free online patch repository – which currently includes more than 500 patches -, the GameSynth presets, and even the random patch creation feature!
In this particular case, as I was browsing the Modular model’s presets, “Ship Engine Failure” jumped out as a potential starting point for the operating sound of the elevator.

While it is a relatively large modular patch and it may seem complicated, you don’t have to understand all the details to use it. Simply by cutting branches of the patch or lowering their volume, you can get a good sense of the role of each part of the patch.

In the following video, I simply removed the patch branches that were not suitable for the elevator sound (it’s a spaceship preset originally, after all!). I adjusted the shape and time of the envelopes to reach a more suitable sound for an elevator and to ensure that the starting and stopping sequences would actually match the timing of my game. The resulting sound has more of an old-style elevator feel to it, which is what I was after.

One of the advantages of GameSynth – and procedural audio in general – is that you can edit sounds quickly, like I did, simply by adjusting parameters, without any loss of sound quality. When using recordings, you need to process the samples, at the risk of degrading the original audio.

In addition to the main operating sound, I created various accompanying sounds that you would expect to hear while riding an old elevator. This is a good example of the versatility of GameSynth, as they were all designed using different models.

The sound of the bell chime (when the elevator reaches its destination) initially comes from a free sample I downloaded from the Web. As it didn’t fit too well with an old-style elevator, I imported it into GameSynth’ Impact model. Thanks to the resonance analysis feature, I was able to create a similar sound, but entirely adjustable. I could set the pitch and the amount of resonance to exactly what I wanted. Click here to learn about the sample analysis feature.

A modular patch simulates the sound of the elevator reaching the floor and the door opening. The initial impact is generated by Clang module (which is great for metal impacts). The patch also references an external patch made in the Impact model, where I drew a contact sound with a metallic material.

For the metal squeak that can be heard during the elevator’s operation, the “Heavy Machinery” preset of the Particles model seemed like a good fit, and I simply drew the sound on the sketch pad.

Although elevator sounds were available online, either commercially or for free, they often came with some ambience (e.g. staircase reverberation) or extra recorded elements (e.g. mechanical part, footsteps) that made them hard to fit in my game.

As I occasionally record foley sounds, I also tried to add my recordings to the game, but there was always something I wanted to change later on while working on the scene, either in the sound itself, or in the duration and timing of the different events. Also, a recoding sounded “too real” for the style of 2D game I’m developing.

Because GameSynth generates sound effects from scratch, and based on user parameters, it is possible to avoid any extra environmental sound and background noise. By adjusting the parameters, you can change the characteristics of the sound (from realistic to cartoonish, from harsh to smooth etc.) and the timing of its elements as you want, without any sound degradation. This is a major benefit when developing games and it worked perfectly well for my elevator scene!