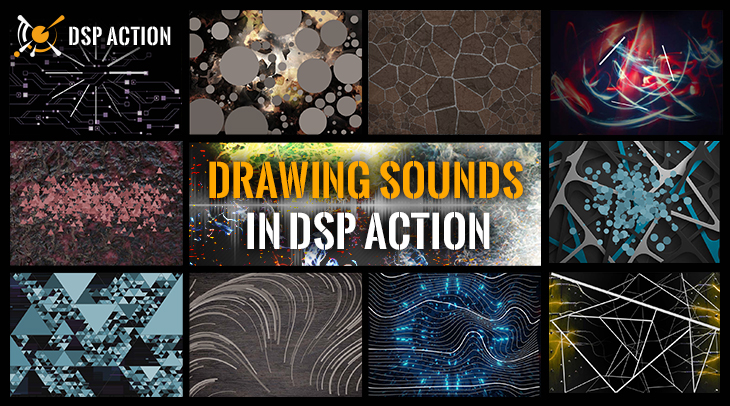 DSP Action allows you to literally draw sounds with your mouse or graphic tablet. In addition to the movements and speed of the mouse or stylus, where you draw is equally important.

Indeed, many of the sound synthesizers in DSP Action add another layer of interaction by displaying generative graphics that serve as sound triggers. In this post, we will examine the various types of generative backgrounds available in DSP Action, and how they allow you to generate interesting sound variations.

Parameters to customize the generative graphics are available in the ‘Control’ section of the sounds. They usually include parameters to adjust the position, size and orientation of shapes or lines. Most of the time, there will also be a Graphics Seed parameter to try different graphic configurations based on the same settings.
Similarly to the synthesis parameters, the graphics parameters can be assigned a random range to generate variations automatically when rendering multiple files. 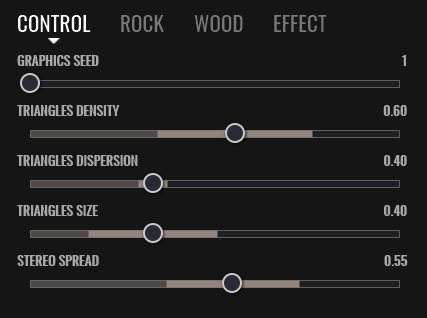 There are different types of trigger lines used in DSP Action. Single or parallel trigger lines are used extensively in the sound generators of the Hit category, for example. A single line can be triggered once or several times depending on the type of sound. Sometimes, the speed at which the line is crossed will also affect the sound.

In the case of parallel lines, their number, orientation and thickness can also often be adjusted to generate different sounds.

Sometimes, the lines may also be arranged in specific patterns. This allows for a more intuitive control of certain types of sounds. This is for example the case with the Fight or Countdown sound generators.

Finally, a large number of trigger lines at various angles can also be displayed, as in the case of the Break-Glass or Transform-Electricity synthesizers. The angle randomization and line thickness can be chosen. Crossing thicker lines can trigger louder sounds for example.

The Granular Shapes algorithm displays a large number of small shapes, a bit like particles or grains. The size, density and dispersion of the shapes can be adjusted. Many sound generators from the Break category use this algorithm to simulate the sounds of debris. The sounds triggered may depend on the position and size of the shapes.

The circle packing algorithm displays a large number of non-intersecting circles, which are all triggers. The density and size of these circles can be adjusted. It is particularly well adapted to the synthesis of granular sounds, but can also be used for more aggressive sounds, for example to trigger explosions of various forces.

This algorithm displays triangles that can be subdivided up to a specific number of times. The density of the triangles and their subdivision probability can be chosen. This is well suited to simulate random-like triggering when drawing, as in the Transform-Glitches generator.

This algorithm displays trigger zones that simulate glass shards. Their density and angle spread can be chosen.

The Voronoi algorithm simulates cell-based patterns that often occur in nature. Each “cell” triggers a sound. The density of the cells and their arrangement can be selected. Their final position and size will affect the sound generated.

In this algorithm, curved lines whose arrangement is based on flow fields are used as triggers. The number of lines, their curvature and length can be adjusted.

Attractors are used to deform parallel lines, with the amount of tension and deformation of the lines modulating the synthesis parameters. This algorithm is particularly well suited for the generation of evolving sounds.

This algorithm displays concentric and potentially overlapping arcs whose numbers and lengths can be selected. It is ideal to simulate mechanical processes.

A popular technique used in the generation of graphic textures, the Perlin noise algorithm displays a dot whose size depends on the noise amplitude at that point, and modulates the level of the sound accordingly. The ‘Density’ parameter controls the fractal level (i.e., the number of octaves of the Perlin noise).

During the development of DSP Action, we created a small tool to experiment with various generative graphics algorithms, and to see how they could be used to control our sound generators. As you can see, some algorithms made the cut, and some did not! We may release this tool as a freebie in the future. In the meantime, here is a sneak peek! 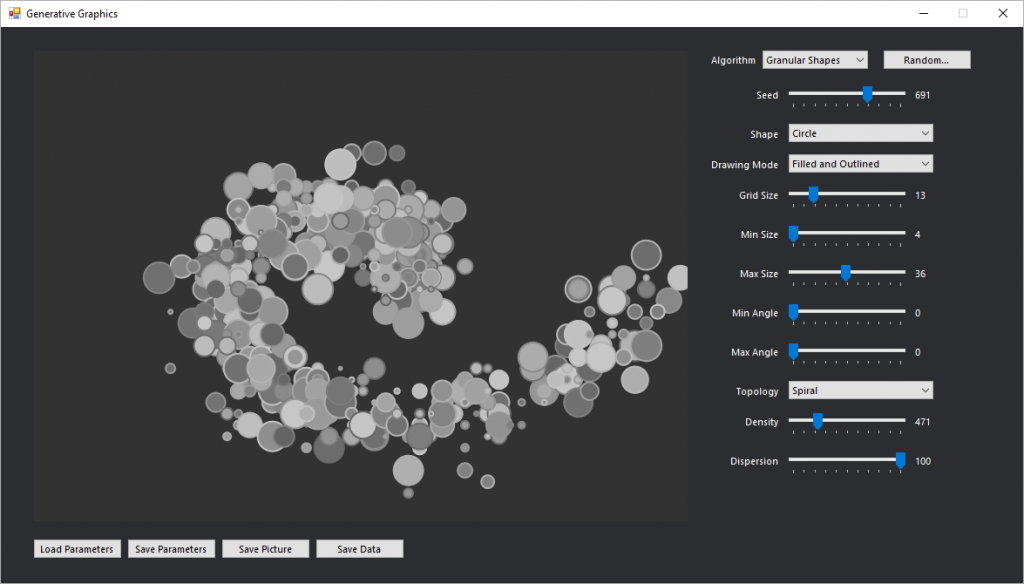 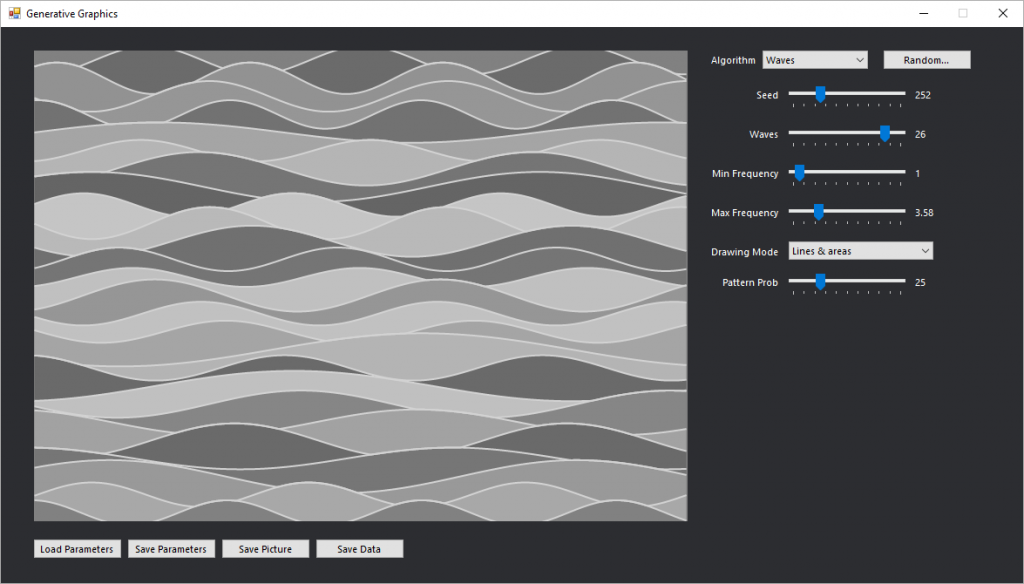 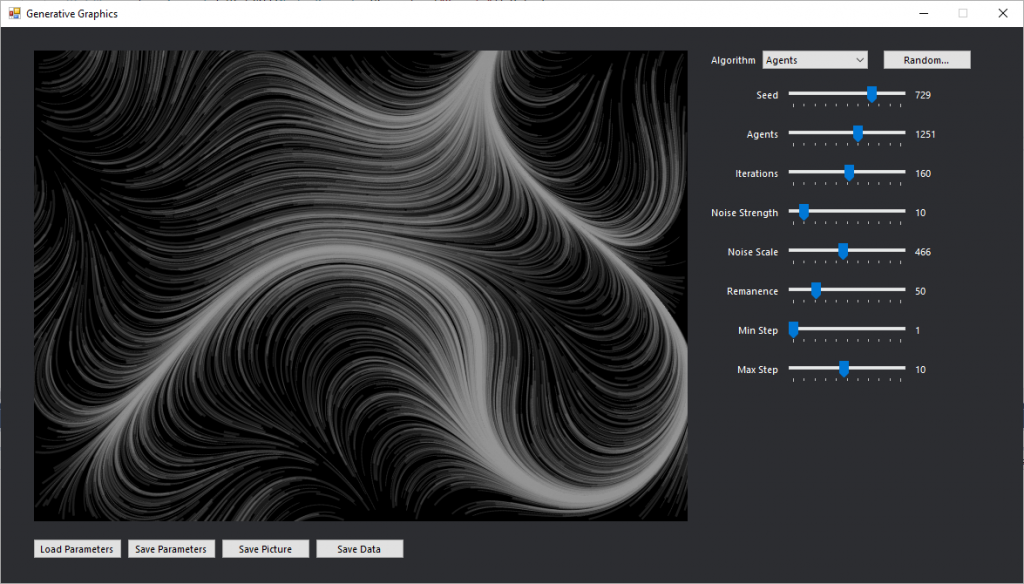