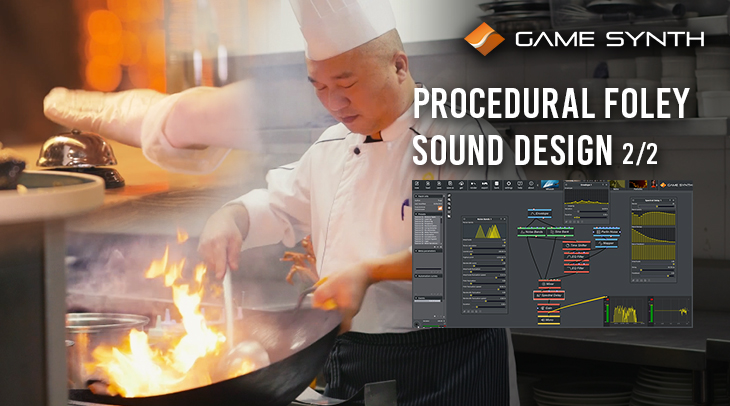 This is the second part of our blog on the design of realistic Foley sound effects using procedural audio. We are back in the kitchen and after slicing vegetables it is time to cook and serve! First, here is a reminder of the final result. Again, this is 100% sound synthesis, with no samples used. 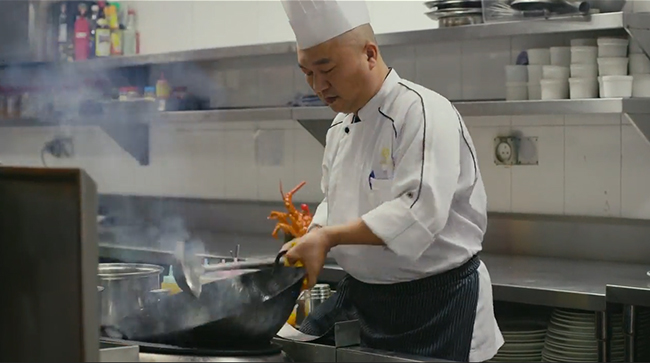 The most interesting part of the video is arguably when the chef is cooking in the frying pan, as not only the sound must be realistic, but it must also perfectly match the movements on the screen (thankfully it is a benefit of using procedural audio). Four different patches have been designed for this section.

Oil Sizzle – This patch uses a Fire module as the main sound source. The signal is dived in 3 branches. In the first one, the signal goes through a Flanger, creating the main rumbling sound. The second one sends the signal through a Highpass EQ Filter that emphasizes the crackles. The last branch creates a resonant hiss by controlling a filtered Noise by the amplitude of the fire (via an Envelope Follower), and sending the result through a Tube module.  The second and third branches are mixed together and sent through a Biquad Filter whose cutoff modulation reflects the variations in intensity of the fire in the video.

Pan and Ladle –The handling of the pan on the burner and the ladle use similar patches (which makes sense since the main object of the interaction is the pan in both cases).

For the pan, a Noise Bands module with several large bands in the mid frequencies is used to generate the main body of the sound, while a Sine Bank module adds a low frequency bump. The Noise Bands module is also connected to two EQ Filters configured as Bandpass and Lowpass. Their cutoff frequencies are modulated by a Perlin Noise to simulate the characteristic bouncing sound associated with the metallic, dome-shaped object that is the pan. Once mixed, all these signals are sent to a Spectral Delay used as a resonator thanks to its low Delay and high Feedback values. 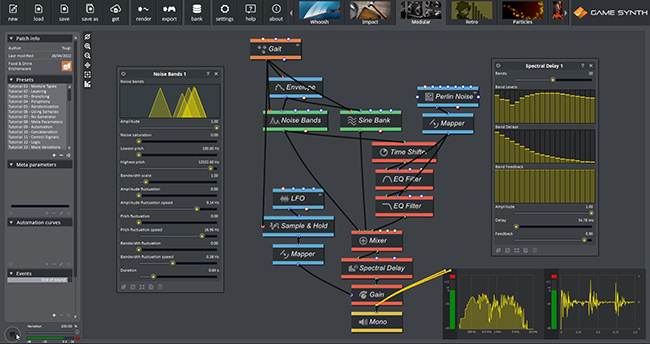 The main differences in the ladle patch are that the Noise Bands have a slightly higher pitch, and the third branch is reduced to a single Bandpass EQ Filter. In addition, more emphasis is put on the mid-frequency bands of the Spectral Delay, which also has slightly lower Delay and Feedback values, creating a lighter and less resonating sound than for the pan. 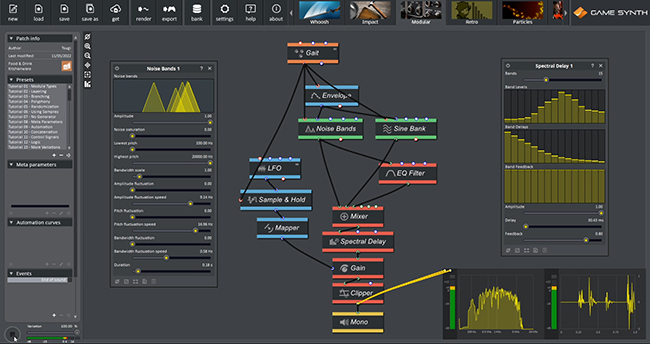 A similar patch simulates the short friction between the pan and the ladle. The Gait, LFO and Sample & Hold modules have been removed to give the control of the patch to a longer Envelope. Its duration and its curve have been randomized to create a new variation each time.

A single procedural audio patch can generate sounds for many types of interactions, while keeping the same sonic signature. Simply by changing the way the patch is triggered and how its overall amplitude is controlled, various impact and friction sounds could be generated. 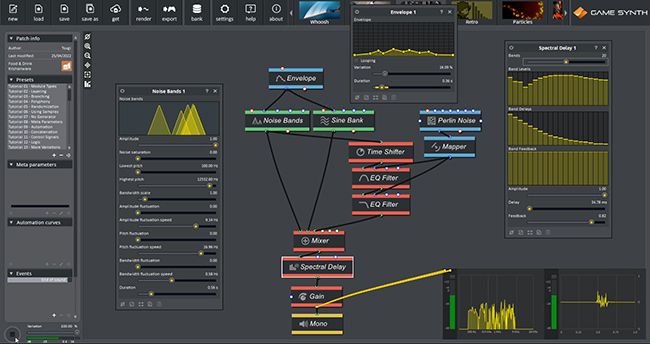 The last shot of the video shows the plate ready to be served with the staff ringing the bell on the counter.

Plate – The handling of the plate on the counter is again divided in two patches: impact and movement. The impact patch has several branches. In the first one, an Impact module is mixed with a Friction module whose Material is set to Glass. The resulting signal goes through a Spectral Delay which acts as a resonator, and gives a ceramic feel to the sound. The second branch uses another Impact module to simulate the wood of the counter. The final branch relies on a Noise Bands module with bands in the lower frequencies to create a noisy bump. It is then sent to an EQ (5 bands) to accentuate some of the frequencies in the low-end. EQ Filter modules are used to keep the sound in the 200 Hz to 500 Hz range. Once these 3 branches combined, a Pitch Shifter module randomizes the global Pitch of the patch, and a final EQ (5 bands) boosts the low end while dampening higher frequencies. 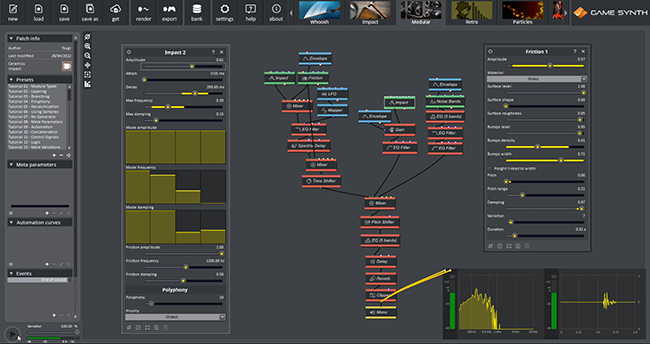 For the plate sliding on the counter, two Friction modules with Material set to Rock and Wood are used.  The movement is created by an Envelope controlling the pitch of the Wooden Friction. A noisy layer generated by a Noise Bands module (with a slightly longer duration) makes it more realistic. Finally, the EQ (5 bands) helps create more wood-like resonances in the final sound. 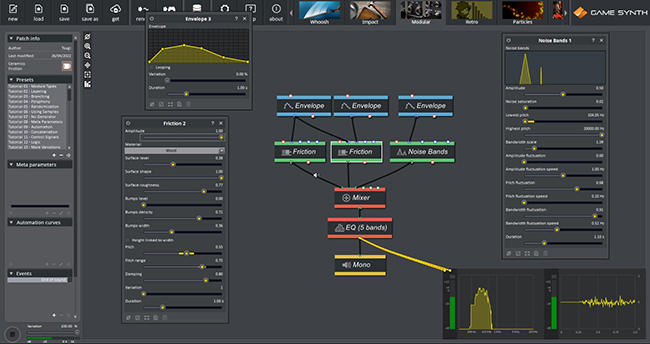 Counter Bell – The bell sound at the end of the video consists of a short noisy impact – unsurprisingly generated by an Impact module – and a resonant section composed of 4 harmonics.

The individual harmonics are output by Modes modules of increasing frequency and damping. A Chorus effect with a slow LFO rate then modulates the resonant section.

The second harmonic has an extra fade-in via an Automation Curve so that all harmonics don’t appear simultaneously, for more realism. Using the Arithmetic module connected after the Automation, the signal is multiplied by a sine LFO, which modulates the harmonic’s amplitude even further.

This concludes our 2-part tutorial about realistic Foley sound design using procedural audio techniques. We hope this has whet your appetite to create realistic patches with GameSynth for your games and movies!