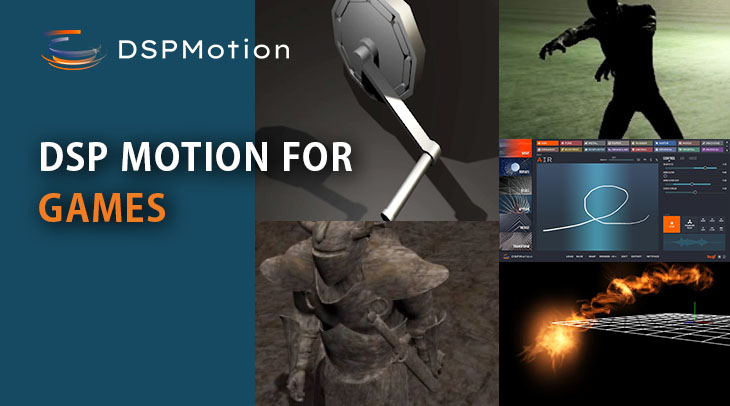 Thanks to game middleware such as Unity and Unreal, it is becoming easier every day to develop games with astounding visuals and realistic animations. When it comes to adding sound effects though, it is not always that simple, especially for indie developers.

Luckily, procedural audio software such as DSP Motion offer a new and convenient solution to create sound effects for games, simply by drawing them. By using procedural models instead of fixed recordings, DSP Motion allows for the customization of the sounds to perfectly match the style of your game, and for the creation of as many sound variations as you wish.

There is no more need to spend time and money sourcing and licensing large collections of sound effects that only vaguely fit your project requirements, or to purchase recording gear and software to edit and organize your samples (although recording your own Foley can be very gratifying!)

In this post, we will show how DSP Motion can advantageously be used in a few typical game development situations. This is a non-exhaustive list of course and, for specific types of games, don’t forget to check the other tools in the DSP Series: DSP Anime, DSP Retro, DSP Sci-Fi, and DSP Fantasy!

In this first example, we designed the sound of a swinging sword by drawing on the sketch pad while watching the character’s animation. This allows us to recreate the exact same dynamic in the sound effect than in the animation. Tip: don’t forget to keep DSP Motion on top by clicking on the pin icon when you work with a visual reference in another tool, it will be much easier!

Although we first created a typical whoosh by selecting the “Air” audio shader, it is easy to quickly try other audio shaders such “Fire” or “Metal” by holding the control key when selecting them (the drawing will then be preserved). Add some random ranges to the parameters, and you can quickly create many whooshes variations for your animations!

In the video above, we are using Unity’s Dissolve shader to make a character gradually appear or disappear. Getting a sound that perfectly matches a visual can be challenging, especially when changes happen during the development cycle.

Thanks to procedural audio, we can simply tweak the parameters of the sound model whenever the settings of the graphic shader have changed and generate a new matching sound. Even when the length of the effect sequence is modified, it is possible to adjust the ‘Duration’ parameter of the curve in DSP Motion and a new sound will be generated.

Doing the same with samples would require you to source a new sound, record a new one, or time-stretch the existing sound with the potential loss in quality that it incurs.

Another staple of modern videogames are particle effects, which can be very effective to visualize magic spells for example. Among the 16 audio shaders DSP Motion offers for each motion type, some of them are perfect to sonify magical incantations, such as “Fire”, “Water”, “Electricity” etc.

In the example above we combined two type of motions – “Merge” and “Transform” – using the “Fire” audio shader to simulate the sound of a fireball. Layering various type of motions and shaders allows for the creation of more complex effects. For other examples of layering with DSP Motion, please check our posts about sound design for animated logos (beginner and advanced levels).

Other DSP Motion audio shaders, such as “Metal”, “Rubber”, “Minerals”, “Organic” etc., are perfect to generate Foley sounds. In this example, we used the ”Organic” shader to create the frightening sound effects of a walking zombie.

Here again, the DSP Motion sketch pad is ideal to add a level of realism to the sound and to match the animation. The fluidity of the sound generated and the number of variations created would require the sourcing of many samples and a considerable editing time, when all we need to do in DSP Motion is to set a couple of sliders and draw!

Physics systems in games have enormously progressed over the last decade. Thanks to these improvements, many realistic interactions with in-game objects are now possible. This is even an essential feature of most VR games. However, it can be tricky to design sounds for.

In the video above, we used the “Wood” audio shader of DSP Motion to simulate the sound of a sliding, rotating, and growing wooden cube. We also used the ”Metal” audio shader to create the sound of crank. These examples demonstrate how easy it is to quickly create many sounds for physical interactions, simply from the mouse movements and their speed.

Games and 3D animations also often require ambiences and environmental sound effects. Here, we have layered sounds created with the “Air”, “Water”, and “Vegetal” audio shaders. Because you can draw the sound on the sketch pad, DSP Motion is particularly well adapted for the generation of audio that follows camera movements (for example in cutscenes), like in the video above.

To further streamline the workflow when implementing sound effects in your game, DSP Motion provides an exporter to Unity. After assigning random ranges to the parameters of your choice in DSP Motion, select an asset folder in your Unity project, choose the number of sound variations you want to generate, the default parameters of the audio clips, and let DSP Motion do all the work for you. For example, you can add a dozen of whooshes to your game in just a few clicks! DSP Motion can even generate a C# script with functions to play the sounds sequentially, randomly, in shuffle mode etc.

If you are interested in creating sounds for games and animations, don’t forget to also check GameSynth, our main procedural sound design tool. In addition to the benefits offered by procedural audio, GameSynth can import animation curves from all the main 2D / 3D packages (and even motion capture data) to allow your sound effects to match an animation perfectly.