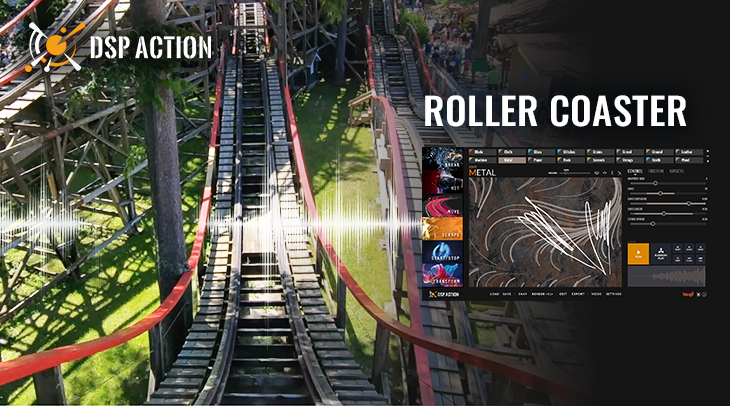 After destroying cars and buildings in our previous DSP Action tutorials, let’s create the more joyful sound of a roller coaster this time. This will be a great opportunity to use the synchronized video playback feature, and design a sound that perfectly matches the twists and turns of the ride. 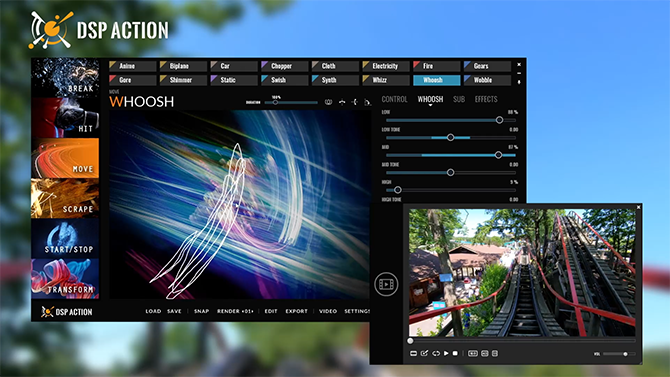 The sequence begins with the train being very briefly pulled up. We mainly used the Heavy Gears component of the Move Gear patch for the pulley sound. The rate of the mechanism is controlled via the drawing movements along the Y-axis. Therefore, we first drew downward, and then upward when the train starts accelerating. 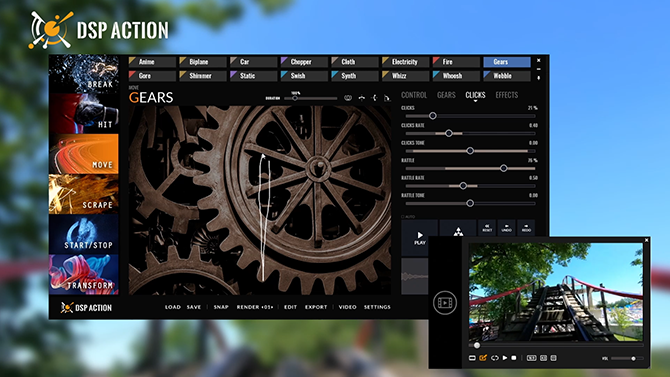 Next comes the rattling sound of the cars on the track. The Scrape Metal patch is used to produce a metallic friction sound whose intensity varies based on the acceleration of the drawing movements. In addition, the patch triggers other metallic sounds when drawing over the curved lines. The Lines parameter was set to 95 in order to create an area dense enough to trigger many sounds when drawing over it.

We drew quickly on the lines to trigger metallic sounds at a regular pace while the train is moving on the track. However, when the roller coaster’s track suddenly drops, we drew downward to an empty area, thereby stopping the rattling. The sense of friction decreased, reinforcing the sensation of speed due to the drop. 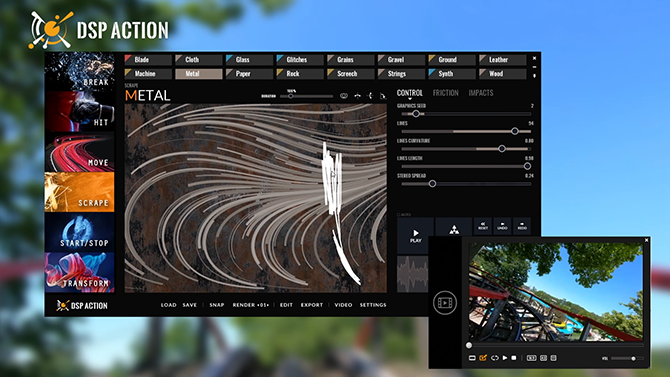 The Move Whoosh patch is used to accentuate the sense of motion over the hills of the track, by simulating the sounds coming from air displacement. We mostly used the Low and Mid components of the patch. With the Stereo Spread at 0, we quickly drew between the sides and the center of the drawing pad when the track goes up and down, following the speed of the ride on the video.

Finally, to add more weight to the train, we used the Scrape Ground patch in a similar way, generating a heavier rumble sound. We drew upward and downward on the pad, following the track curves. As the volume of the rumble decreases when the track goes down, it also reinforces the sense of speed by sounding less frictive.

Once again, with DSP Action, designing a complex sound such as a roller coaster was very easy! In addition, thanks to the synchronized video playback, we were able to quickly produce a sound that perfectly matches the motion on screen.